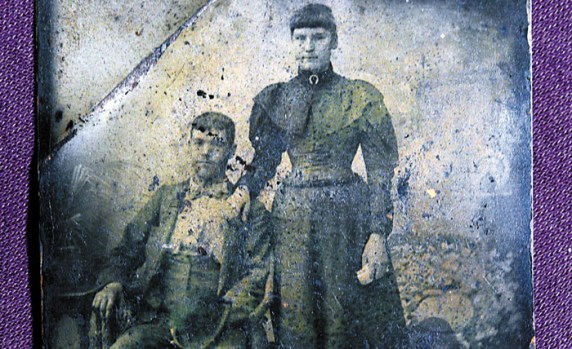 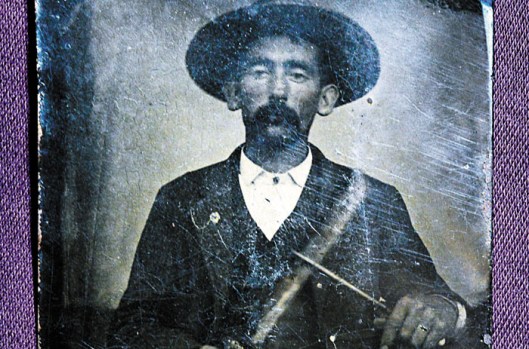 This man with hat and mustache in a buttoned coat holding a large knife in from of him. A common pose with tintypes was to hold a prop that reflected what hey did for their livelihoods. Maybe this man was a butcher or a farmer who use the knife in cutting grain in the fields 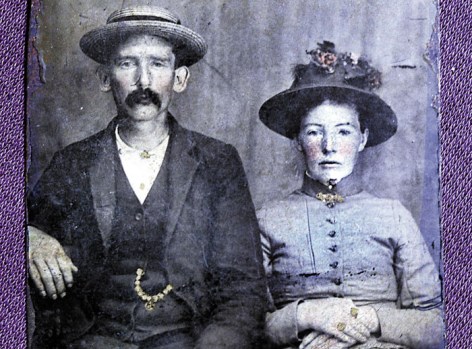 A couple sit in chairs in a studio. He has a bushy mustache on his upper lip, an open fronted dress coat and vest with a pocket watch chain. The lady has a straight 1800s buttoned dress up to her chin.

Tintypes are photographs exposed on a thin sheet of iron that has been coated with collodion. They are also called “ferrotypes” because of the iron base.

An interesting feature of a tintype is that there is no tin used in the photograph. In fact, if you hold a magnet to the back of a tintype, the photo will be attracted to the magnet because it is iron. This is a sure test that you are holding a tintype.

I have a small collection of tintypes that I find to be mysteriously interesting. I don’t know the people pictured or when the photos were actually taken.

When I find a tintype in an antiques shop or flea market for a few dollars, I usually purchase it. I have always been fascinated by the small 2 1/4 by 3 1/4 inch photos. The tintypes vary in size depending on the size the photographer cut the metal.

Some tintypes are reversed like looking into a mirror.

I look at my tintypes and wonder about the people pictured and ask myself questions about them that will never be answered.

Studying these personal family photos makes me feel like a voyeur. I feel like I am looking into their lives in a way that they realized would happen when they posed for the photos.

It is hard to not gaze at the little photos and not try to imagine what kind of people they were. Were they good people with families? Were they hard workers? Were they farmers or Civil War soldiers leaving for battle?

They had their photos taken in a studio so that their images would be preserved for future times.

Another photographic process that precedes tintypes is daguerreotypes, invented by Frenchman Louis Jaques Mande Daguerre in 1839. The photos were expensive, so the common man couldn’t afford to have his photo made using this process.

Tintypes became popular and replaced daguerreotypes in the 1860s and 1870s because they were cheaper and easier to make.

The tintype came into use during the Civil War. Soldiers, both blue and gray, liked to have a tintype photo made and sent home to the family before battle knowing they might not return home. Many of the Civil War battlefield scenes were captured as tintypes.

Tintypes were the Polaroids of the 1800s. They didn’t take long to process, and they were reasonably quick to return to the customer.

It was popular for tintype photographers to follow military units from battle to battle during the war in covered wagons with their large-format cameras and chemicals loaded in the back. They were operating a photo business and documenting the war at the same time.

After the Civil War, the same tintype photographers traveled west in America capturing the Wild West and its people in photos. With their wagons and equipment, they traveled to small towns on the frontier taking photos and moving onward.

Most subjects would sit in chairs or lean against a chair or fence to keep from moving. Some used braces at the back of their necks to hold their heads perfectly still. If they moved, the image would be blurred.

Tintypes became part of folk art in the 19th and 20th centuries. The photographers became popular at festivals and park events.

Spencer’s David Lamanno has revived the craft and does many projects and tintype portraits with his large camera. They are neat and eye catching. Some subjects dress in 1800s or early 1900s period clothes for the photos. Lamanno has studied the craft and works much like the early pioneers making tintype photos of people and buildings in the area.

My tintypes collection includes one of a man pictured sitting quite stiffly in a chair wearing a dark hat. Maybe he is wearing his Sunday suit or his only suit. Another man is dressed, somewhat sportily, with a cap on his head while holding the railing of a fence in front of a blank background in a studio. You can tell it is a studio set because the photographer shot off his background slightly. He holds something in his right hand.

One studio tintype shows a young man and maybe his wife sitting in chairs in a studio. He has a bushy mustache on his upper lip, an open-front dress coat and vest with a pocket watch chain showing. The lady has a straight 1800s dress buttoned to her chin. She wears a large black hat with a flower arrangement on top. Her hands are crossed in front of her in a stoic pose. Both have that typical tintype stare into the camera.

Another photo pictures a man in hat and mustache in a buttoned coat holding a large knife in front of him. A common pose with tintypes was to hold a prop that reflected what the subject did for a living. Maybe this man was a butcher or a farmer who used the knife in cutting grain in the field.

The studio photographers often used painted backgrounds of mountain scenes or lakes and bridges. One such couple in my collection is a lady standing with her hand on the shoulder of her husband, who is seated in a chair. She wears a conservative, long-sleeved dress with a high neck. It appears she has a pin at her neck and a handkerchief in her hand.

The man, strangely, has one of his hands covered in his lap with his hat. Maybe he was missing a hand? Maybe he was a war veteran?

Many photographers used a less ornate, plain background behind their subjects.

Many finished tintypes have the four corners of the metal rounded off. I assume that was to prevent the sharp corners from cutting your fingers or your pocket.

There are other famous tintypes of Indian chief Sitting Bull wearing a hat, Geronimo armed with a rifle, Buffalo Bill in his Wild West costume, and Annie Oakley with her sharpshooter.