Interim pastor has a full-time approach 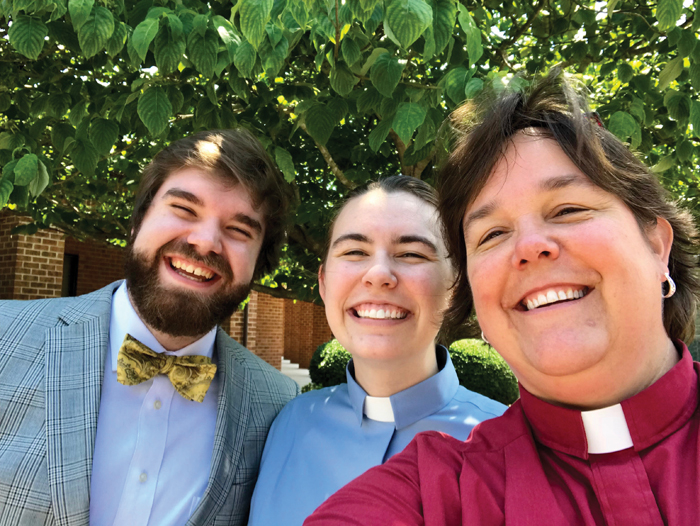 Luke Stempniak, Taylor Rister and Dawn Rister celebrate Taylor's first day at St. Mark's Lutheran Church in Salisbury. She is serving as interim pastor for the small congregation this summer.

SALISBURY — On Tuesday, 20-year-old Taylor Rister spent the day on the phone.

She wasn’t making vacation plans or catching up with school friends. Instead, she was calling a list of inactive members of St. Mark’s Lutheran Church, where she serves as interim pastor.

“I’m trying to find out if they’ve found another home congregation,” Rister said. “… If not, so many people drift away from church when they don’t feel like their ministers are reaching out to them.”

Rister said she just wants members of her congregation to know “they have someone that’s thinking of them, someone who cares.”

The statement comes easy from Rister, a graduate of the University of South Carolina and current student at North American Lutheran Seminary in Pennsylvania. She’s hit the ground running in her first interim position, and St. Mark’s small congregation already has a big place in her heart.

“These people have really claimed their faith for their own,” she said. “They’re working to keep their church alive. To be able to come into a community willing to actively work in their church is such a blessing.”

Rister started her work at St. Mark’s on June 17, having learned of the opportunity through her mother, Dawn.

But Rister said she didn’t follow in her mother’s footsteps. Actually, she said, the family likes to joke that it’s the opposite.

“I’ve felt called into ministry since I was a little girl,” she said. “It’s something I’ve always been working to. … My mom also felt called, but growing up, the idea of women in ministry was foreign.”

As the concept has been normalized over the last decade, she said, her mother finally followed the call. She left her job as a teacher and coach, graduating from seminary two years ago.

Dawn Rister followed the call to Salem Lutheran, leaving her home of Chapin, South Carolina. She and Taylor’s father are now in a long-distance marriage — at least until he either retires or finds a job in the area.

“It’s been a blessing in its own way, just because it’s hard on our entire family,” said Rister. “God has given us the strength to go through all of it. It has nothing to do with us; it has everything to do with God.”

Rister admits that women in ministry is a newer concept. But the idea of a mother-daughter duo is even rarer.

But, she said, “Paul didn’t baptize anybody that he didn’t want going into ministry, and he baptized entire families.”

Whether it’s through leading Sunday school, visiting with shut-ins, or leading sermons each Sunday morning, one thing is clear: Rister’s lifelong passion for ministry makes her an ideal candidate for a pastoral role.

She’ll remain with St. Mark’s congregation until the end of August. In that time, she encourages all who are looking for a place to worship to visit the church at 5202 Mooresville Road.

Woman injured in crash temporarily out of hospital; family,…