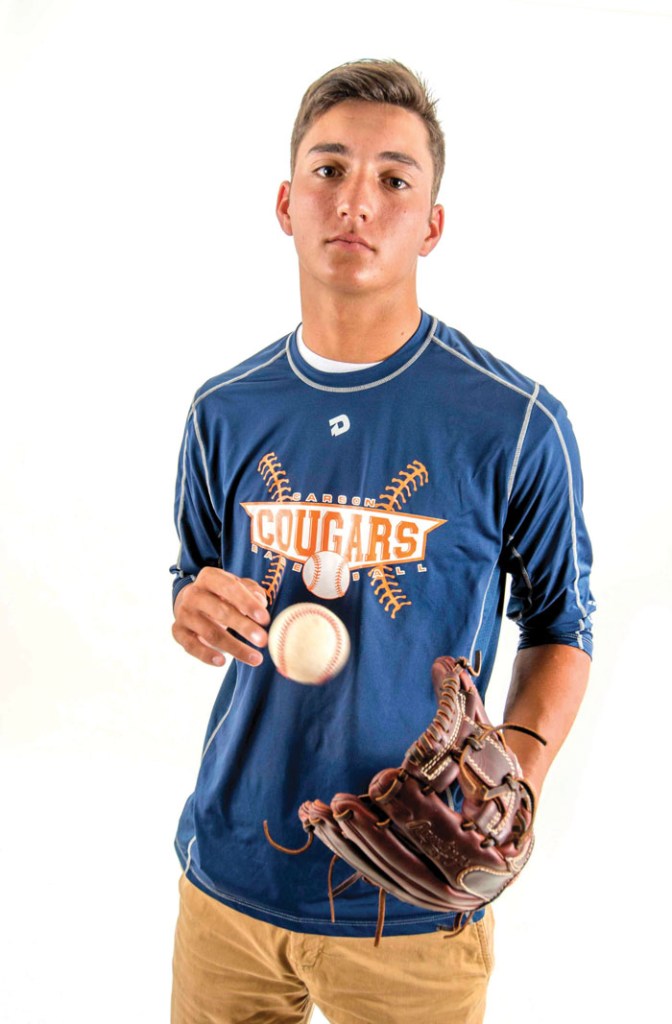 SURPRISE,  Ariz. — Carson graduate Owen White has raked in a mountain of major awards the last two years, but he’ll always keep his Darrell Misenheimer Award plaques polished and close to his heart.

The Darrell Misenheimer Award is provided for the Rowan County Male Athlete of the Year by Jeff Chapman of Dynamic Strength & Fitness. White is the winner for the second straight year. He’s the first back-to-back athlete of the year in the county since record-setting West Rowan running back K.P. Parks in 2009-10.

Most awards just happen for White, who was a second-round draft pick by the Texas Rangers in June. Even Gatorade North Carolina Baseball Player of the Year, as huge as that accolade was, didn’t affect White emotionally. But the Misenheimer Award is different for him. Misenheimer, a Salisbury-Rowan Hall of Famer who passed away in 2014, was White’s uncle.

“This is the one award I really push for,” White said. “My uncle, Darrell, Big D, he was a guy I wanted to grow up to be like. He was a guy who would give you the shirt off his back. Growing up, I spent a lot of time in the summers with him, and he made the day fun whether we were fishing or just cleaning the floor of the West Rowan gym. So this is the greatest award I could possibly win. It means everything.”

In his high school days in the 1970s, Misenheimer was a powerful, larger-than-life athlete. The county’s co-athlete of the year in 1975, he heaved the shot put 61 feet, 5 1/2 inches, a remarkable effort that is still the county standard. He also was state runner-up as a heavyweight wrestler and a Shrine Bowl football lineman.

The 6-foot-3 White won the 2017 Misenheimer Award as a three-sport guy, drilling 3-pointers and hitting the boards for the basketball team while punting and passing — and even catching passes — for the football team. That was in addition to dominating on the baseball field as a pitcher/slugger/shortstop.

White didn’t play football as a senior. There was just too much of an injury risk with the MLB draft looming, and with White’s selection in the early rounds a sure thing. But he turned in phenomenal senior seasons in his other two sports. Both of his teams won conference championships and were the best in the county. Carson baseball was 24-6, while Carson basketball was 26-3.

White is a product of an impressive athletic gene pool. His 6-foot-7 father, Tim, was something of a legend in the days when professional slow-pitch softball was a huge deal. Tim walloped 250 home runs for the Howard’s Furniture team in 1985. Owen’s mother, Casey Lanning White, starred in basketball and softball at Pfeiffer and is in the school’s Hall of Fame.

White’s three older sisters, Jacqueline, MacKenzie and Michaela, all starred in high school in the county and went on to play college softball or volleyball. Owen has followed them and learned from all of them. He’s been seen as a special athlete since middle school.

“We had him for one day with the Carson Junior Legion team when he was an eighth-grader,” Carson baseball coach Chris Cauble said with a chuckle. “Sure, I’d heard a lot about him, but he far exceeded anything I’d heard. He was pulled up to our big Legion team, that was the Southern Rowan team in those days, after one practice with us.”

As an eighth-grader, White was one of the best players the Southern Rowan team had in the summer of 2014, and he began making a positive impact at Carson as a varsity freshman. He graduated with a pile of records, offensive records as well as pitching marks. He was a superb fielder, as well. As a senior, he was county pitcher of the year for a second time and shared (with East Rowan’s Hayden Setzer) his second straight player of the year honor. He was 10-1 on the mound as a senior, with an 0.22 ERA and  101 strikeouts in 64 innings. He was Carson’s most dynamic offensive player (.984 OPS) and he didn’t make a single error in conference games. In his last official at-bat for the Cougars, he belted a home run.

“He’s just really talented,” Cauble said. “But I think the most impressive thing about him is that throughout a great high school career he stayed humble and mild-mannered. He was yes-sir and no-sir even when was a senior, and he wasn’t faking that. It was legit. That’s who he is. He never got tired of talking to the kids, to throwing with the kids after games. He enjoyed being a role model for the kids, and not every great player does. He never acted like he was better than anyone else. I’ve seen talented players who brought their teammates down, but Owen always brought his teammates up.”

White scored 14.7 points per game for Carson basketball as a senior. He scored 946 points in a three-year career. If coach Brian Perry has one regret about last season, it’s that he pulled White out of a lot of games early when the Cougars had safe leads. He would like to have seen him score 1,000, but White never minded seeing the reserves get their chances.

“I think the thing that stands out about Owen is that as good as he was in baseball, he never cheated basketball, never cheated his basketball coaches or teammates,” Perry said. “When baseball scouts were coming to meet with him at school, he never used that as an excuse to miss basketball practice. He was always there. He’s just a really special kid. There aren’t a lot like him.”

Perry said White, who joined teammates Jamarius Hairston and Jailen Williams on the all-county first team, is one of the best shooters he’s seen.

“I’ve seen a lot of good ones, but he’s one of those guys that everything he shoots, you feel pretty confident it’s going in,” Perry said. “He can walk in a gym, even after being away for a month, and just start burying 3s.”

Carson had six seniors. Perry had to sit one when the traditional Senior Night game started. That one was White. He volunteered.

“He told me he wanted to sit, he was fine with it, and there wasn’t anything to discuss,” Perry said. “That’s how he is.”

“Yes, Division I football,” Cauble said. “Every college football recruiter that came in here wanted to talk to him about playing quarterback.”

Since he didn’t play football last fall, it meant White was in the weight room just about every day. He pushed his weight up from 170 to 190, but then he ran his way back down to 175 during basketball season.

“He’s got the frame to handle a lot more weight,” Cauble said. “A year from now, I’d expect him to be pushing 200 pounds, and not a bad 200, a 200 that is all muscle. He’s going to be a mountain of a man one day, like his dad, and I firmly believe we’re going to see him pitch in the big leagues.”

Since he was drafted and signed for $1.5 million, White has lived an interesting existence in Surprise, Arizona, where it was 107 degrees on Wednesday morning. That was relatively cool. Temperatures are expected to reach 111 today.

White hasn’t thrown a single pitch off a mound since he was drafted, and he won’t pitch at all this summer. The Rangers are taking things cautiously and deliberately with White and first-round pick Cole Winn. They’ve made a serious investment in the two right-handers and want them to avoid any possibility of arm issues.

“I didn’t throw a pitch my first three weeks out here,” White said. “It’s been all lifting, running and conditioning. I’ve gotten a lot of rest. Cole Winn and I have spent a lot of time in a classroom setting, learning about mechanics, proper nutrition, food supplements, how to take care of our bodies.”

White threw at 60 feet off flat ground in Arizona for the first time this week. After a rest day, he’ll perform another modest throwing session.

He hasn’t made any major purchases yet with his bonus money. He’s playing a lot of golf, as there are five courses within five miles of where he’s staying . He shot 79 this week. He’s pretty good at that sport, too.

On Aug. 27, the Rangers are going to allow White throw off a mound, so he’s circled that date on his calendar. In early September, he’ll get to come home for a few days. Then he’ll return to Arizona to pitch in the fall instructional league. That’s when things will start getting serious.

A number of outstanding multi-sport athletes were under consideration for the award. Salisbury senior Trell Baker was one of the county’s most exciting football and basketball standouts and was named the Central Carolina Conference Male Athlete of the Year. Salisbury junior Jack Fisher was the county soccer player of the year, stood out in baseball and handled kicking duties for the Hornets’ football team. West Rowan’s Jalen Houston was only a sophomore, but he’s already made a name for himself as a marvelous football receiver and was the county’s track and field performer of the year.

White’s senior teammates Hairston and Williams, were all-county football players as well as basketball stars. East Rowan senior Sean Incardona excelled as cross country runner of the year and in track and field.

Competition also came from East  junior Christian Bennett, who will be one of the favorites next school year. Bennett is a stout linebacker, one of the toughest football players in the county. He was versatile in track, sweeping the throws in the North Piedmont Conference championships while also helping East in the 4×100 relay. He was county champion in the shot put and regional champ in the discus. During basketball season, he’s not a big scorer, but he’s a starter for the Mustangs, a lockdown defender and a spirited rebounder and leader.