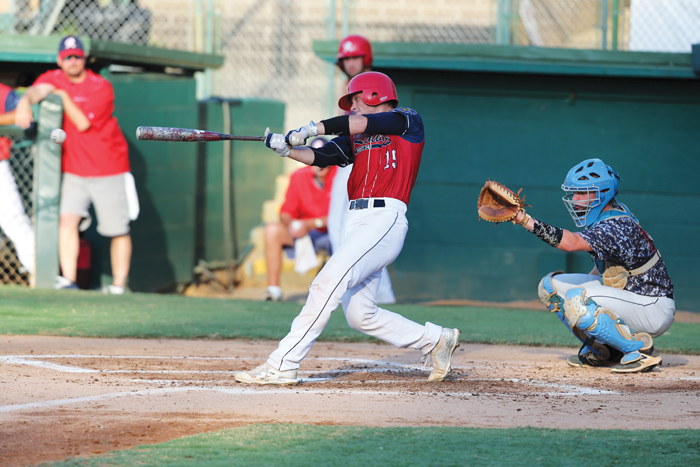 James Sipes/Salisbury Post file photo Rowan’s Trevor Atwood connects with the ball during a game against Stanly County on June 23. Even though he has been a student at Catawba, Atwood is eligible to play for Rowan Legion.

SALISBURY — Trevor Atwood is doing the last thing he ever thought he’d be doing — playing a third summer of baseball for the Rowan County American Legion team.

A star catcher at West Rowan High, a guy who constantly came through with key hits for teams that won three straight conference championships, Atwood signed with Catawba College’s program in May 2017.

Every local player who signs with Catawba understands part of the price for being an Indian is an early end to his Rowan County Legion career. Jim Gantt coaches Rowan Legion as well as Catawba, and once a player enrolls at a college, he can’t play for his college coaches after the academic year is finished. Rowan’s Legion program has lost many outstanding Catawba players who were still Legion-eligible age-wise, to that rule.

Atwood was exceptional in high school. He hit a home run over West’s Blue Monster on his first varsity at-bat back in 2015 and he played a major role for two clubs that reached the fourth round of the 3A state playoffs. Catchers who make consistent contact (Atwood has always walked more than he’s struck out) and are also capable defensively aren’t easy to find, so Atwood stood out.

After his junior season at West, Atwood was the starting catcher for the Rowan Legion team in the summer of 2016. That was the team that finished second in the nation. Atwood often batted eighth in a strong lineup, but he drove in 31 runs. His RBIs included the game-winning single in the ninth inning of the 3-2 victory against Union County that gave Rowan the state championship. He had two hits and drove in a run in the 3-1 win against South Carolina that gave Rowan the regional championship. He had a 3-for-3 game in the World Series as Rowan demolished Washington. Then he produced two more hits in the 12-inning loss to Arkansas that ended the season.

Following his senior high school season, Atwood returned as the starting catcher for a Rowan Legion team that made it to the state tournament. Atwood produced one of the more memorable hits of 2017, clearing the bases with a ninth-inning base knock against Wilmington.

“The ball got past the center fielder to the wall, three guys scored, and I scored too,” Atwood said. “I just kept running. Everyone was laughing at me. I was needing some oxygen.”

As a Catawba freshman, Atwood didn’t play much. Catawba had Cameron Morrison, who had been the 2017 Area III Player of the Year for Randolph County, handling the bulk of the backstop duties. Atwood got into nine games and had 13 at-bats. His only two RBIs came on a double in a 26-1 laugher against Coker.

Late in the season, Atwood had reached an important decision. He broke the news to Gantt that he wouldn’t be returning to Catawba for his sophomore year.

“I really enjoyed playing baseball at Catawba, but after a year of school I still didn’t have any idea what kind of degree I was interested in going after,” Atwood said. “I didn’t want to be someone who plays four years of college baseball, and then has no idea what they want to do when the real world hits. I told Gantt I’d decided to transfer to Cabarrus College of Health Sciences, where I’d have a clear plan for what I wanted to do with my life. He wasn’t upset. He understood my decision and supported it. He said it was a very mature decision on my part, and he said he’d have my back.”

At that point, Atwood thought he was done with baseball, but a few days later he got a call from Seth Graham, his high school coach at West and a Rowan County Legion assistant.

Graham assured Atwood that since he’d officially withdrawn from Catawba, he now was eligible to play for Gantt for another summer.

“I told him, ‘Well, all right, let’s do it,'” Atwood said. “It’s always a thrill to play at Newman Park. I love the atmosphere, love the crowd. I even enjoy hearing our fans yell at the umpires.”

Atwood had practiced daily at Catawba, but he’d played so little he had to shake a bit of rust.

“Seeing live pitching, seeing more breaking balls, it was an adjustment,” Atwood said. “But it came back pretty quick.”

He went 2-for-3 on opening night, produced three RBIs in Rowan’s third game and socked his first homer of the season in Rowan’s sixth contest. He hasn’t looked back.

The addition of Atwood’s bat to the lineup turned out to be huge. He’s been the No. 3 hitter most of the season. Heading into the playoffs (Rowan has a first-round bye), he has four homers and his 28 RBIs are second on the team behind first baseman Chandler Lippard’s 30.

“We’ve got some power on this team,” Atwood said. “With Lippard, Hayden Setzer, Wayne Mize and Luke Barringer, we’re going to hit some home runs. I’ve gotten stronger as I’ve gotten older and my knowledge of the game from playing so many years is helping me hit with more power than last year. I can think right along with the guy pitching to me. A lot of times, I  have a good idea what’s coming next. In the Mooresville game on Saturday, I pulled a fastball hard down the line foul, so I knew the next pitch wouldn’t be another fastball. I was sitting on a curveball, I got one, and I hit a home run.”

A few months ago Gantt was really concerned about Rowan’s catching. Now it’s a strength. Defensively, it might be the team’s best position. Atwood is solid behind the plate, and Carson’s Garrett Alewine, a first year Rowan Legion player, is such a good receiver that Gantt can rest Atwood frequently as the DH. Alewine threw out two basestealers in Sunday’s game at Mooresville.

The catchers have helped Rowan go 22-6 and take another division title. That didn’t look likely when the roster was announced back in May, but some kids have surprised everyone, and having veterans such as Atwood, John Owen and Setzer, who all were part of the World Series run of 2016, is beneficial. Those three are like having extra coaches on the field.

“Legion is always amazing, watching a team come together is so much fun,” Atwood said. “Being a West Rowan guy, in the high school season you’re competing so hard that you really don’t like those guys from Carson and East Rowan at all. But then everyone bonds, everyone becomes friends, every summer. The older guys encourage the young guys. Everyone gets better.”

Knowing this will be his last fling with competitive baseball has made Atwood more appreciative of  his surroundings. The grass is a little greener. The hot dogs and peanuts at Newman Park taste a little better.

“I’m going to miss it, so I’m doing everything I can to make this summer special,” Atwood said.

Female Athlete of the Year: Everything looking up for…