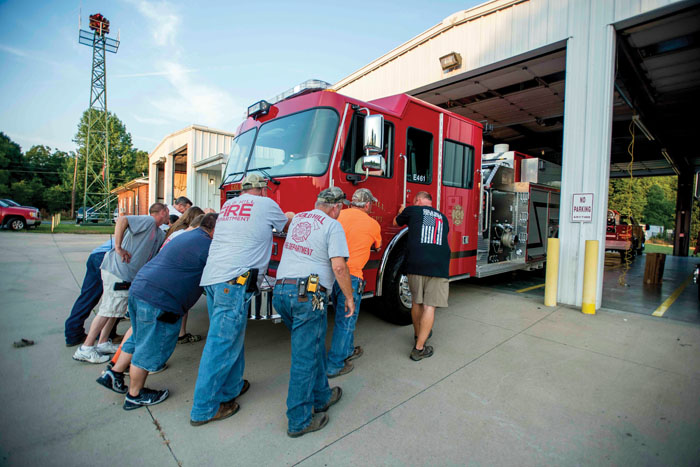 Members of the Gold Hill Fire Department on Tuesday took time after a weekly business meeting to ceremonially push their new 2018 Sutphen engine into a bay at the firehouse. Jon C. Lakey/Salisbury Post

All the men and women of the department family gathered around the front of the engine and pushed, while someone slowly backed the 46,000-pound piece of machinery into the station.

When asked about the ceremony to put a new engine into service, Fire Chief Chris Brown said, “It’s just one of those things you can’t explain. It’s like christening a boat.”

The new engine replaces a 20-year-old Freightliner engine that aged out of North Carolina standards.

“The state wants to ensure that your first-response truck is up to date and is something that is going to serve the public well.” Brown said.

In the little more than a month that Brown has been fire chief, he has overseen the purchase of the new truck and putting it into service, as well as getting a top rating from the Insurance Services Office.

“People in the area need to check with their homeowners insurance and see if they can get a lower rate,” said Rita Hooks, chairwoman of the department’s board of directors. “We got a $450 rebate on our insurance.”

The new $394,000 truck not only keeps the department up to date but expands its ability to fight fires effectively. The new engine can carry as many as six people on a first call, doubling the response team size. It also has features such as a built-in generator, more space to carry equipment, and an electric ladder rack.

One of the most interesting features is the extended bumper that contains a “junk line” on the front of the engine, so named because it can be used in sections shorter than the 200-foot main hoses. That makes it more equipped to put out trash fires.

New equipment is not the only thing that’s important for the Gold Hill department.

Everyone in the department is family, and everyone is there for each other in hard times.

Gold Hill has a total of 29 members, four of whom are paid. Brown considers himself more of a volunteer, only taking payment when he has to fill in for others’ shifts.

The family atmosphere continues to inspire the younger people who want to be a part of the department. Gold Hill has five junior members who will someday protect their community.

When asked at his preschool graduation what he wants to be when he grows up, 5-year-old Gunnar Hooks said, “I want to be a fireman, just like my Paw-paw.”

Armed with cutting-edge equipment and brotherly love, the Gold Hill fire department will continue to work to protect the community and its residents for generations to come.