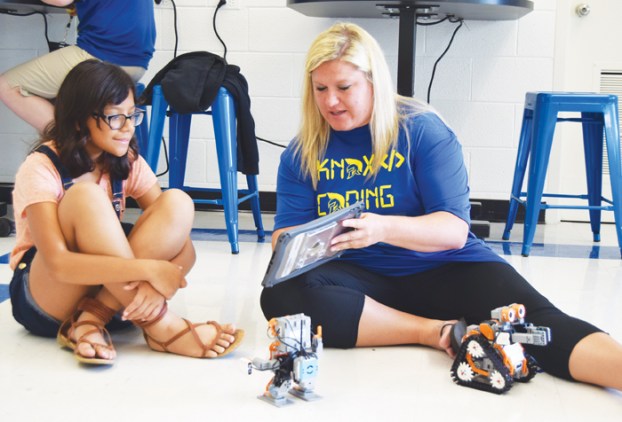 SALISBURY — The new STEM lab at Knox Middle School seemed quiet last week during coding camp, but if you listened closely, you could hear the gears turning in campers’ heads.

The lab features writeable tables, 3D printers, drones, robots and other coding and STEM materials. And last week, a group of 15 current and future Knox Middle students got to break it in.

“So each day, they’ve picked one thing,” he said.

The camp is part of a funding agreement with Fred Stanback and the city of Salisbury. The two helped fund Knox’s new STEM lab but said they wanted a coding camp offered during the summer. Once the school year rolls around, the lab will be in full use for clubs and daily coding and STEM classes.

Homework and the school year are still far off, so during the camp students focused on learning and having fun. But that didn’t mean Whisenant and Knox teachers went easy on their campers.

For example, Whisenant said, anyone can buy a drone and control it using a joystick. But campers were expected to plan and program a flight path that the drone would execute independently.

“They’re actively coding it,” he said. “… It’s kind of pushing them to go past the toy aspect of it and make it into something real.”

Sometimes, he said, it takes some convincing.

“Pushing them to actually code is the hard part, because they want to play like they would at home,” he said.

Whisenant and other teachers tell students that if they learn how to code, they can have a lucrative career. It seems to work.

Students said they love the creative aspects of the camp. Nathalie Lezame said her favorite activity was working with 3D printers. While mornings were dedicated to different coding activities, campers spent every afternoon working with the printers and designing a self-chosen project.

“We get to create something of our own while still learning how to code,” Nathalie said.

She also enjoyed the variety of the camp.

“It’s really fun we get to do several different things,” she said.

“You just get to create your on stuff and take it home,” she said.

Because these students were enjoying using the new lab, Whisenant said he thinks it will be a big hit in the upcoming school year.

ROCKWELL — A 55-year-old Liberty firefighter responding to a call was killed early Wednesday afternoon when his pickup hit a... read more