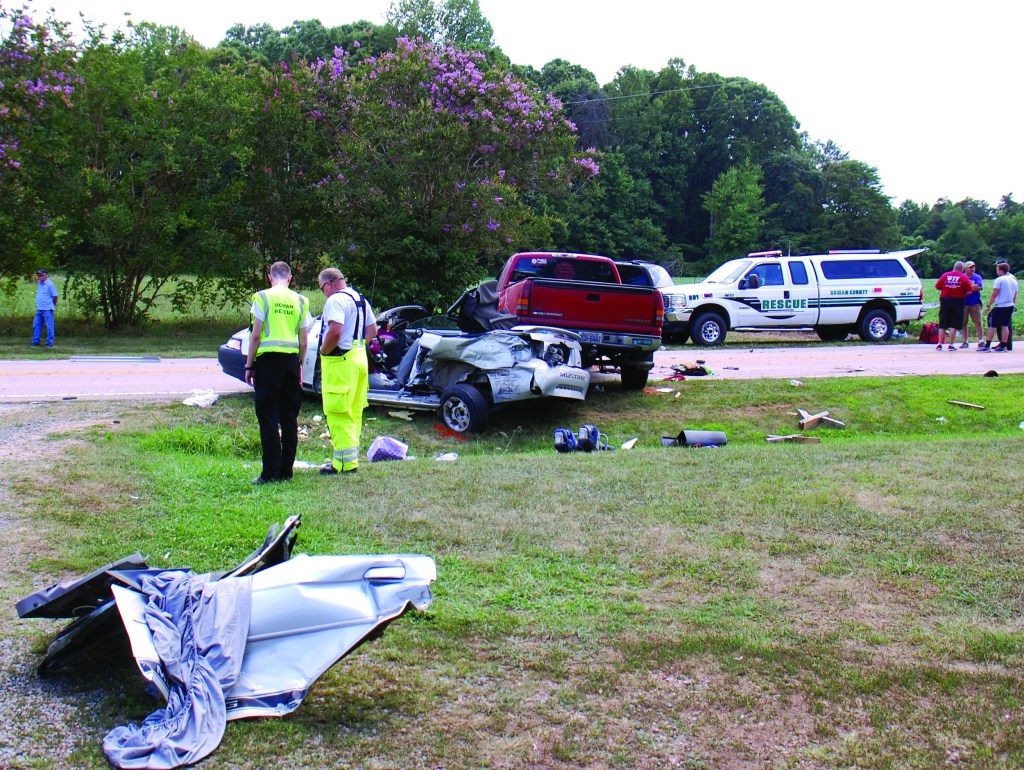 Mark Wineka/Salisbury Post Rescue personnel survey the scene of an accident early Wednesday afternoon on Gold Knob Road outside of Rockwell that killed the driver of a Chevrolet Silverado truck. Parts of the silver Ford Mustang hit by the pickup hit are strewn over the yard. Two people in the Mustang were seriously hurt.

ROCKWELL — A 55-year-old Liberty firefighter responding to a call was killed early Wednesday afternoon when his pickup hit a turning car on Gold Knob Road.

The State Highway Patrol identified him as Michael Goodnight, 55, of Salisbury.

His Chevrolet Silverado struck a Ford Mustang near 1060 Gold Knob Road about 1:22 p.m.

Two women in the Mustang were injured and airlifted to Wake Forest University Baptist Medical Center in Winston-Salem.

They are identified as the driver, Penny Carter, 44, of Gold Hill, and Sarah Al-Zaid, 18, of Concord.

Trooper J.T. Simmons said both the pickup and Mustang were heading east on Gold Knob Road, and he confirmed that Goodnight was responding to a separate traffic accident in the Liberty district.

Simmons said that Goodnight attempted to pass the car as the Mustang was making a left turn into a private driveway. After the impact, the pickup overturned, killing Goodnight.

Carter, who was turning toward the house of her late father, Bill Duncan Carter, had to be freed from her vehicle by emergency responders. Bill Carter died just Monday, and his family was gathering at his house on the July Fourth holiday.

Simmons said where the collision occurred between the pickup and car was a no-passing zone. He said the accident is still under investigation, and the speed of the truck had not been determined.

The trooper confirmed the truck was in the left lane and that a long set of skid marks were left in that lane. But Goodnight also could have started passing the car when he was in a passing zone, Simmons said.

The Rowan Rescue Squad, Rockwell City and Rockwell Rural were among the emergency responders, along with the State Highway Patrol.

The accident Goodnight was responding to was not serious, according to reports.