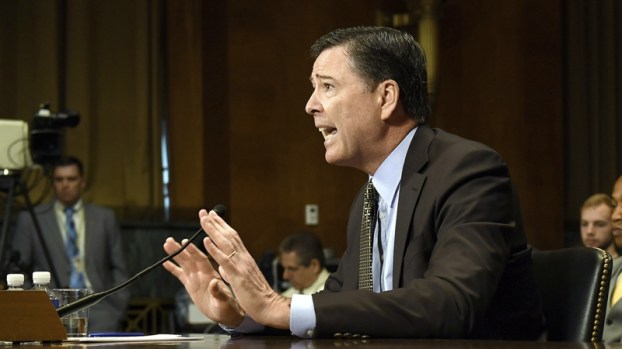 Letter: Congress must clean up the FBI

I remember when I believed we could trust our FBI and Department of Justice. Over the past two years, I have completely changed my once-stellar opinion of these organizations.

I believed that these organizations stood for “equal justice for all.” I trusted them. I now know that I was naive.

When I see a sailor prosecuted for photographing classified equipment aboard a nuclear sub, I understand and believe that was the correct decision. When I see a retired general lie to the FBI under oath, I understand that prosecution.

What I don’t understand is how this same FBI and DOJ can fail to prosecute their own agents, lawyers and State Department personnel who have lied to Congress. How the FBI can question Hillary Clinton and her contingent who testified to the FBI and some to Congress and none are prosecuted. How can the careless transmission of classified information on a non-secure server “not meet the standard” for breaking the law? How can the destruction of government property (cell phone, hard-drive, classified emails, etc.) “not meet the standard” for prosecution?

The “how” has become clear in the past couple of weeks. The hierarchy in the FBI decided that Donald Trump would not be president. This was clearly detailed in FBI emails stating that “we won’t let this happen,” and, “We need an insurance policy in case it does happen.” The insurance policy turned out to be the Russia probe.

It is hard to believe this could happen in this great country. It is only because Trump was elected that this came to light.

Hopefully Congress will continue to investigate the investigators and punish those who need to be punished. If so, maybe we can once again put our faith back into the FBI and Justice Department.

This message/plea is addressed to the Department of Transportation or the City of Salisbury, whichever is responsible for an answer.... read more