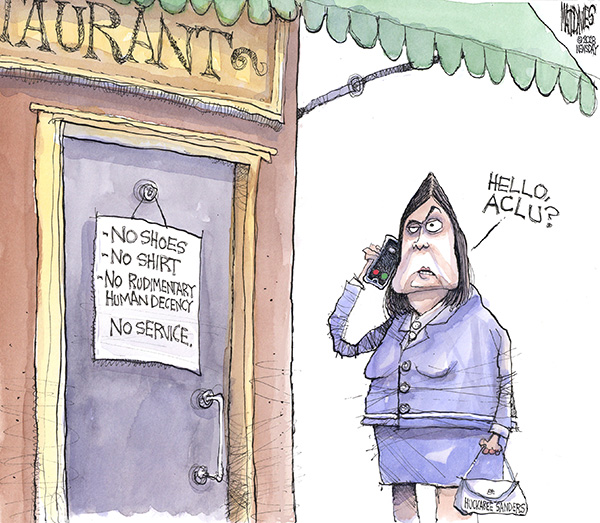 What is the worst thing that has happened to us in the last few weeks?

Our state legislature’s final week of secrecy and surprises?

North Korea’s reported resumption of processing of nuclear fuel, a violation of President Trump’s understanding that North Korea’s nuclear threat has been eliminated?

Trump’s break with our NATO and G7 allies and his blossoming friendship and upcoming summit with Vladimir Putin, perhaps establishing with Putin in a new “G2” alliance to stand together against the U.S.’s former allies?

No, not any of these. Such things I have come to expect. They are a part of the day-to-day grind of sad and discouraging developments that no longer surprise me. They have become a part of a normal day.

What was worse for me happened late last month at the Red Hen Restaurant in Lexington, Va., where Stephanie Wilkinson, the restaurant’s owner, asked one of the customers to leave because she disapproved of the customer’s political views and actions.

Wilkinson could have been legally sanctioned for refusing to serve Sanders if her action had been based on race, color, religion, national origin, sex, etc. But she had every legal right to exclude Sanders, whose politics and actions as a public official she despised.

As Wilkinson, an admired Lexington civic leader, explained to The Washington Post, she thinks Sanders works for an “inhumane and unethical” administration. She continued, “This feels like a moment in our democracy when people have to make uncomfortable actions and decisions to uphold their morals.”

I probably agree with Ms. Wilkinson’s politics. So, why did I bite my lip in disappointment when I learned what she did?

As readers of this column know, I love restaurants like the Red Hen, ones that are small, locally owned and operated, places where people come for food and fellowship.

I have visited hundreds of such restaurants all over North Carolina and written about them in this column, in magazines, and in my book, “North Carolina Roadside Eateries.”

Many of my favorite local restaurants are owned by people whose political views are 180 degrees different from mine.

But nobody has ever threatened to kick me out or treated me disrespectfully.

An important reason-to-be for these local gathering places is that they provide a place where all of us are welcome, whatever our political persuasion, whatever our role in politics or public life.

Take Wilbur’s, the iconic barbecue restaurant in Goldsboro. Wilbur Shirley is a proud Democrat, but he welcomes all people who love good barbecue, whatever their party affiliation or beliefs. Visitors will be happier, of course, if they adhere to the doctrine of eastern style North Carolina barbecue, Wilbur’s specialty. But even those who love Lexington style are welcome.

At Wilbur’s, customers may argue with each other, and even with Wilbur, about politics, but no people will be asked to leave because of what they believe.

On my visit to Snyder’s Farms Restaurant in rural Randolph County, I felt a little uncomfortable at first, surrounded by Richard Petty memorabilia and knowing that I was probably the only Democrat in their crowded dining area.

But owners Betty and Wayne Snyder and one of their customers, N.C. Sen. Jerry Tillman, put me at ease and showed me their restaurant was about community, not about political division.

I hope the owners of our local eateries will keep them open and welcoming to all, making them refuges from the division and lack of civility that is raging though our country.

And, I would like to think Stephanie Wilkinson, if she had it to do over again, would give Sarah Sanders a warm welcome and let her finish her meal in peace.