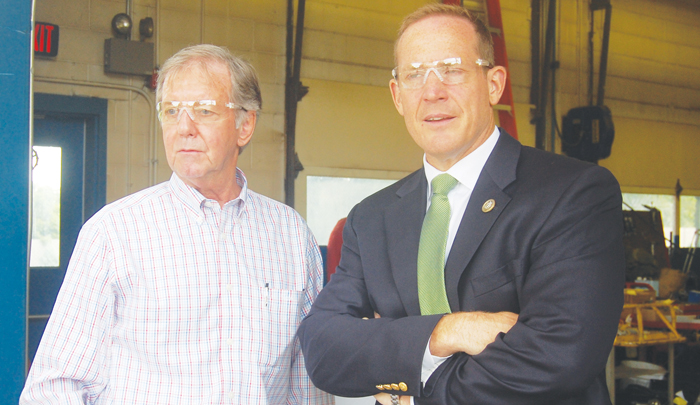 SALISBURY — U.S. Rep. Ted Budd and representatives of the National Association of Manufacturers visited Power Curbers on Monday for a tour and a roundtable with business leaders.

The roundtable featured community leaders discussing the real-world impact of tax reform and other ways Congress can better serve the interests of North Carolina manufacturers and manufacturing workers.

“It’s going to do good things for our country, for these guys out here in our plant,” Messinger said. “They won’t be  able to connect it today, but it will be connected in the future.”

Josh Ward of the National Association of Manufacturers agreed.

But Messinger said he has a real concern about what he called “the tariff situation.”

“At this moment in time, construction machinery has not been hit with the tariffs,” he said. “But the way this thing is playing out, it’s going to cover lots of stuff.”

He said he and other manufacturers have been big supporters of President Donald Trump but they don’t support tariffs because the have the potential to reverse all the gains brought by tax reform.

Budd said that current tariffs are meant only as an effort to lead to trade reciprocity.

“We don’t want a tariff war. We don’t want a trade war,” said Budd. “But, short-term, we’re willing to have these fights while the economy is strong so that in the midterm, we can eliminate tariffs.”

The goal is for more trade, not less, he said.

Others involved in the discussion spoke of another pressing concern for the manufacturing industry: a shortage of qualified workers with a high school degree who can pass a drug test and who are willing to show up every day ready to work, said Messinger.

While there are skills shortage issues, he said, there’s also a labor shortage.

“This will work only if we’ve got people flowing through it,” he said.

He said the labor shortage is a “new problem we’ve created with the growing economy” because there are 6.7 million unfilled jobs.

Meanwhile, he said, there are 6.3 million people disengaged from the workforce.

The idea is for able-bodied adults without dependent children to have to work to receive these benefits, he said, which “establishes good habits.”

Other concerns raised during the session ranged from the need for manufacturing “predictability” — a concern brought by Denise Hallett of Vulcan Materials Co. — and the need for “reasonable, smart immigration” to fill the labor shortage, brought by Fletcher Steele of Pine Hall Brick Co.

The bill would use $50 billion in distressed U.S. Department of Agriculture assets, half for deficit reduction and half for poor neighborhoods in need of infrastructure improvements.

“There might be pockets of Rowan County that, if this would pass, that could apply to,” said Budd.