Cops get props for their culinary knowledge 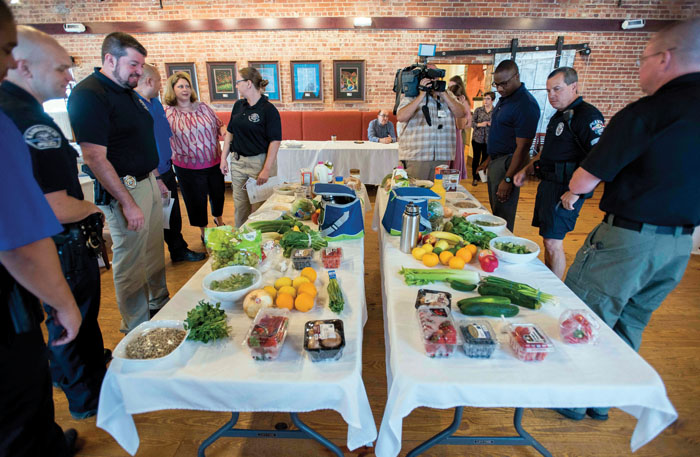 JON C. LAKEY / SALISBURY POST the Kannapolis and Concord Police Departments took part in a joint training mission to improve overall health of police officers. As part of Cooking for a Healthy Life, the newest program under the city of Kannapolis’ Discover a Healthy Life initiative, nutrition experts and scientists at the NC Research Campus collaborated with the police departments to host an event that teaches and tests each department’s nutritional. A total of 20 officers, ten from each department, met at Restaurant Forty Six, in downtown Kannapolis on Wednesday morning. The training began with a nutrition briefing led by Cabarrus Health Alliance’s Nutrition Program Coordinator Meghan Charpentier. Before the officers were charged with creating healthy dishes with food items purchased at a local grocery store. Wednesday, June 27, 2018, in Kannapolis, N.C.

You’re a police officer. You work 12-hour shifts. You never know when you’ll get a chance to eat or what will be available.

As part of Cooking for a Healthy Life, The Cabarrus Health Alliance and the N.C. Research Campus (NCRC) devised a plan to help those officers and others — a little education, followed by a friendly competition between the Kannapolis and Concord police departments.

Meghan Charpentier, a nutritionist for Cabarrus Health Alliance, and Melanie Dwornik, Dole Food Company’s Nutrition and Health Communications manager, brought the nutrition down to earth, made it practical for the men and women who are always busy.

“Ditch the drive-through,” Charpentier said. Instead, buy yourself a soft-sided cooler and fill it with reusable containers, including one to keep some sort of cold or hot drink. It doesn’t have to cost a fortune to make the kit.

“Figure out what you can eat all day,” she said. Try things like a granola bar, dried fruits, protein bars, nuts and seeds.

Take a salad kit — one that includes the dressing. Add a can of tuna, or canned chicken or beans. Tear open the bag, add your protein and eat right from the bag. Add hard-boiled eggs, if you want.

She warned against getting “hangry,” hungry and angry when your blood sugar crashes. Bring trail mix, nut butters and crackers, hummus and veggies, Greek yogurt.

One  way to make sure you have good food is to plan to have leftovers. You can use all or part of a meal to create a new one. Use leftover noodles or rice to start a bowl of goodness. Make a grocery list so you won’t be tempted to get unnecessary stuff.

To help drive the tips home, the nutritionists set up two tables from which each team, Concord and Kannapolis, could choose items to fill their coolers and make three things: a smoothie, a wrap or sandwich and a bowl using a grain and add-ins.

They could choose from white rice, brown rice, pasta, couscous, quinoa for their grain. They had spinach wraps, white and wheat breads. Fruit included strawberries, bananas, blueberries, cherries and pineapple.

For protein, they could choose from chicken breast, ground turkey, sausage or turkey slices. They had spinach, cilantro, avocados, tomatoes, cucumber, zucchini. And there were all kinds of vegetables.

The teams had 10 minutes to plan and 50 minutes to complete their dishes and fill the coolers.

Jennifer Woodford of the NCRC was timing the groups of 10 and answered some questions. The officers would be judged on nutrition, portion size, taste and team work.

They had access to blenders, a microwave, a toaster and the kitchen at Restaurant Forty-Six in Kannapolis.

The planning time was busy. The Concord officers decided to make a wrap with meat and hummus, and a smoothie with strawberries, bananas and orange juice. Then they split into teams so each team would have responsibility for one of the three dishes.

Over at the Kannapolis table, they opted for a rice bowl and a wrap. They came up with a plan for a chicken wrap with avocado, salsa and beans.

Concord was really into the smoothies, with Matt Nichols and Miranda Brady making quick work of the bananas and strawberries and then considering how to garnish.

They decided to sauté peppers and onions to go on the side of the wrap, and to make a spicy guacamole to serve with carrot and celery sticks. Keith Benfield was the guacamole expert, mixing in a seeded, diced jalapeño.

The kitchen got crowded with officers sautéing vegetables and warming wraps. Someone made the joke about this being Basic Law Enforcement Cooking, instead of training.

The Concord teams’ noodle bowl was made with thin, hand cut strips of cucumber and zucchini, instead of any of the grains. They’s also created a second smoothie using blueberries and frozen cherries, Greek yogurt and almond milk.

Kannapolis used white rice for their bowl, then topped it with a mixture of turkey and sausage, as well as kidney beans and a few other ingredients.

When Charpentier asked what the takeway was, Kannapolis Police Chief Woody Chavis said, “It makes you more aware of all the options.”

Things got very quiet as the officers sat down and watched the judges taste their food. The judges had scoring sheets they often referred to, using a point system to indicate favorites. They took careful bites, looked closely inside the wraps. Kay asked what the spread was in the Concord wrap.

So was the Kannapolis grain bowl, which judges remarked on. Chef Blumreich said it was restaurant quality.

At the end, the judges said it was hard to determine nutrition without a complete analysis, but that the meals were balanced, with lots of protein.

Chef Allison said every plate was beautiful, with a lot of color and textures. He too, liked Kannapolis’ rice bowl, but suggested they use brown rice the next time. He was impressed by Concord’s knife skills in slicing their vegetable noodles.

Haas said he was glad the Kannapolis mayor had to be in Delaware, so he could fill in. All the judges said the teamwork showed in the dishes, and that was important.

When the points were all added up, and they counted twice, just to be sure, only 7 points separated the two teams.

Concord’s smoothie and wrap seemed to be the keys, although judges really liked Kannapolis’ rice bowl.

The prize? Bragging rights. Concord officers were happy. Kannapolis was a little disappointed, but all agreed it was helpful and fun. Woodford said the NCRC and Cabarrus Health Alliance hope to do it again and get different officers to participate.

Everyone got a green oven mitt, and could pick up numerous nutritious recipes from N.C. State Extension and the Plants for Human Health Institute, as well as Cooking For a Healthy Life and Chef Blumreich.