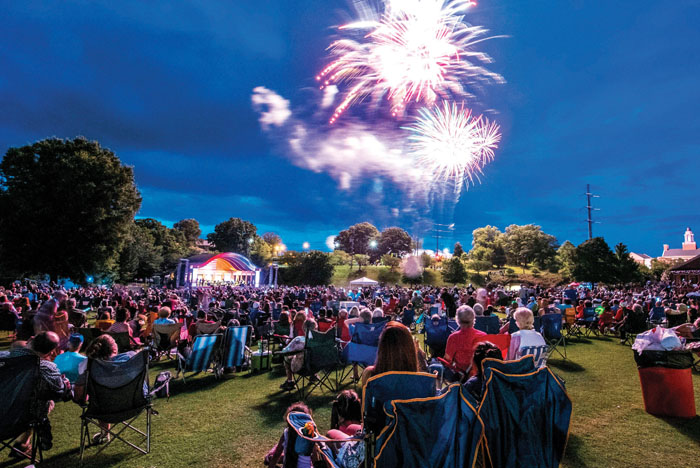 JON C. LAKEY / SALISBURY POST file photo Thousands of people turned out to Kannapolis’ Village Park last year for the annual open air concert by the Charlotte Symphony that was capped off with a 15-minute firework display.

Each year around the July 4th holiday, an average of 280 people nationwide have to go to the emergency room with fireworks-related injuries, according to the U.S. Consumer Product Safety Commission.

Locally, the number of injuries isn’t known, but according to ER doctor Laura Hays of Novant Health Rowan Medical Center, the best way to prevent injuries is to use common sense and leave fireworks to the professionals.

Hays, who is also associate medical director, said injuries can range from mild to severe with the more common injuries being to the face and hands and including burns or blasts. As a doctor in the emergency department, she’s seen eye injuries including corneal abrasions, ruptured eardrums because of the significant loudness of the blast, hearing loss and blindness.

She said injuries come about because people commonly try to light a firework and when it doesn’t work, they pick it up and look at it and the firework erupts in their hands or explodes in their faces.

She said once a firework or sparkler is lit and it doesn’t ignite, water should be poured over it to make sure it’s extinguished. Hays suggested having a water hose close by when using fireworks.

“You should not go to investigate,” she said.

Children are at risk holding even a sparkler, Hays said, because it can get extremely hot, which could potentially cause burns.

“I don’t think kids should play with (sparklers) at all,” she said.

Sparklers burn at a temperature of about 2,000 degrees — hot enough to melt some metals, according to the Consumer Product Safety Commission.

To put that into perspective, water boils at 212 degrees, a cake bakes at 350 degrees and wood burns at 575 degrees.

Anyone who is injured by a firework is urged to seek medical treatment immediately, Hays said.

She suggested giving young kids something other than fireworks to play with like glow sticks.

“It should be thought of as like any other explosives. It should be left to the professionals, especially in a party setting,” Hays said.

“Firecrackers and sparklers seemed like innocent fun when we were kids, but we now realize these devices can be dangerous — especially to young children,” said Mike Causey, the state insurance commissioner and fire marshal.

“I want all North Carolinians to enjoy a safe holiday, but I encourage everyone to leave the fireworks — even those that are legal in North Carolina — to the professionals,” Causey said.

• A responsible adult should supervise all firework activities.

• Alcohol and fireworks do not mix.

• Light one firework at a time and then move away quickly.

• Light fireworks outdoors in a clear area, away from vehicles and buildings.

• Never relight a “dud” firework. Wait 20 minutes, then soak it in a bucket of water.

• Never allow young children to play with or ignite fireworks.