In the trenches: Roy Robison’s the man with the answers for Power Curbers 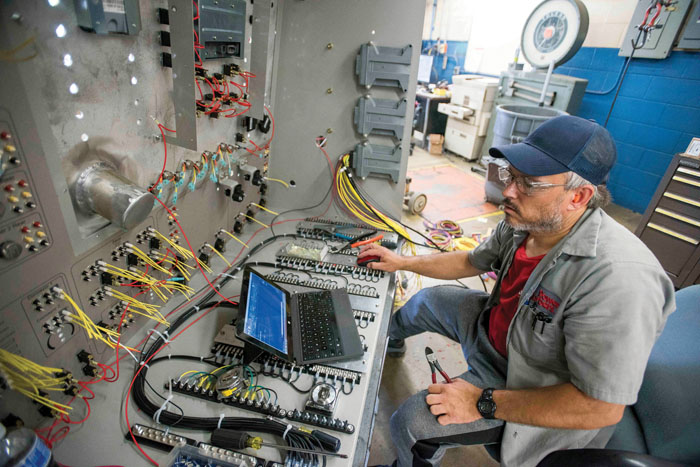 JON C. LAKEY / SALISBURY POST Roy Robison has worked in several departments over his 23 years with PowerCurbers in Salisbury. After an injury to his kneecap, Robison has been working on wiring up a simulator diagnostic panel for one of their products. Friday, June 22, 2018, in Salisbury, N.C.

SALISBURY — Roy Robison wakes up at 4 every morning. He’s in the parking lot at work by 6. When the maintenance crew opens the doors at 6:30, he heads in for a cup of coffee and is ready to work when Power Curbers starts up at 7.

“I told ’em if they’d open the door at 5, I’d be here,” Robison says. “I always leave early. You don’t know if you’re gonna be in a traffic jam, get a flat tire, get in a wreck. My dad always told me, ‘Don’t be the last minute doing stuff.’ Lots of people wait until five minutes before work to leave the house. I can’t do that. It’d drive me crazy.”

He’s been at the company 23 years. It doesn’t seem that long, he says; he just gets up every morning, and they’ve added up.

A Power Curbers machine was famously used in the building of the Chunnel, the tunnel spanning the English Channel.

John S. Henderson, an engineer, and E.L. Hardin, then mayor of Salisbury, opened the company in 1953. In 1980, Salisbury native — and Henderson’s grandson — Dyke Messinger stepped up as president and CEO. He remained in that job until he sold Power Curbers earlier this year.

Robison started working at Power Curbers in the wash pit. For one year, he washed every piece after it was fabricated and before it was integrated into a machine.

The wash pit was outside, and Roy worked in baking sun, cold or rain. The wash pit position was often an entry to other jobs with the company and, after a year, he moved into assembly, at Messinger’s suggestion.

“By that time, I was familiar with all the parts due to washing them,” Robison says.

From parts, he went into building machines. Soon he was asked to move to plumbing and hydraulics. Nine years later, he moved to the electrical shop and wired new machines.

After another nine years, he moved into research and development, where he works on prototypes for new machines.

“Roy’s knowledge is encyclopedic,” says R&D leader Richard Miller. “If anyone needs to know anything, they go to Roy.”

Robison’s “the last of the old-timers” on the shop floor, with two other long-serving employees having recently retired.

“Lots of times, these guys will have a problem and come ask me to take a look. Most times I walk up there, take a look, tell ’em what’s wrong, and go back to my work,” he says. “When I was out five days, they were lost.”

In fact, much of the data on the computers came from Robison’s handwritten notes.

“The engineers would get my notes, make drawings, and put it in the computer. Now the guys can pull it up on the computer and get it ready to go.”

He credits the company with his breadth of knowledge, saying managers encourage cross training. Having the opportunity to move to different departments helped him learn more and more, allowing him to be the resource he is today.

Robison took some rare days off recently after falling and breaking his kneecap. He broke it on a Friday and came to work on Monday and Tuesday.

Then he went to the doctor, who told him to take five days off. He now works sitting down to accommodate his mending leg.

Having a broken kneecap is frustrating. He can’t get up and do like he’s used to. Mostly, he misses riding his motorcycle, a 2014 Yamaha V-Star.

“It breaks my heart I can’t ride it right now.”

Robison reflects on three major changes during his tenure at the company. The move to the new building on Bendix Drive in 2007 was a major game-changer for everyone involved.

“In the old building (on Long Street), if you had a problem with a part, you had to walk all the way across the parking lot,” he says. “Now they’re right here.”

The second game-changer was to LEAN processing. LEAN is a systematic method for minimizing waste that involves purchasing materials just in time to fabricate the product. Power Curbers uses 66 buggies to move the correct parts from one department to the next. With each machine using 1,347 parts, it’s critical that each buggy contains the exact parts the next department needs, preventing workers from having go find them.

Power Curbers has this down to a science.

“They call it the ‘one piece flow,’” Robison says. “You’ve only got enough material to build one machine. It cuts down on inventory. You don’t have a bunch of parts lying around. It’s saved a bunch by going to it. Sometimes it has its moments — you have to go backward. But for here, anyway, it really works. We don’t have a whole lot of problems. Makes everyone accountable, too. If you pass a part to the next person, your quality matters.”

The third big change was the sale of the company. Staff loved Messinger; he was good to everyone, and the change was scary.

“He treated us well. But you can’t really tell a whole lot of difference now. Everything’s still going the same way it always did.”

Robison most appreciates the flexibility allowed in his schedule. He was out for nine weeks once with back surgery after a car accident. When his grandchildren have Grandparents Day at school, he’s thankful he can go. Two of his grandchildren play baseball in Spencer.

“We go to all their games. They’re generally at the house a lot. My grandfather would do about anything I wanted — it didn’t matter. I try to be good to my grandkids,” he says.

Robison credits his dad with his work ethic.

“If my daddy was out in the yard working on his truck, I’d be right there with him. Doesn’t matter. I learned everything from him. I’d be there no matter what,” he says. “I was probably in the way more than anything, but he didn’t mind.

“He had a cousin with a body shop. He’d go there, and I’d come out as dirty as them. Everybody I know today, if they have a problem with a car, they call. ‘I need you to come work on this.’”

Randy Ward, manufacturing manager for Power Curbers, has worked with Robison since Robison came on board.

“Roy has always been completely dedicated to his work,” Ward says. “He has always strived to be excellent at all he does and practically remembers everything he has ever done. Don’t believe he has ever been late for work. He is the first here every day, and he makes the coffee as soon as he walks in. Couldn’t do what we do with out him.”

At 49, Robison is pretty young to have so many years in. He plans to work as long as he can.

“As long as I can get up out of bed, I plan to keep working. My dad retired four or five years ago and went right back to work. I’ve known a lot of people who retire, go home, next thing you know, you read in the paper they’re dead. I don’t want to be like that. If I can stay in good health and get around, I want to be on the go.

“People talk about retirement,” Robison says. “I’d rather be working.”