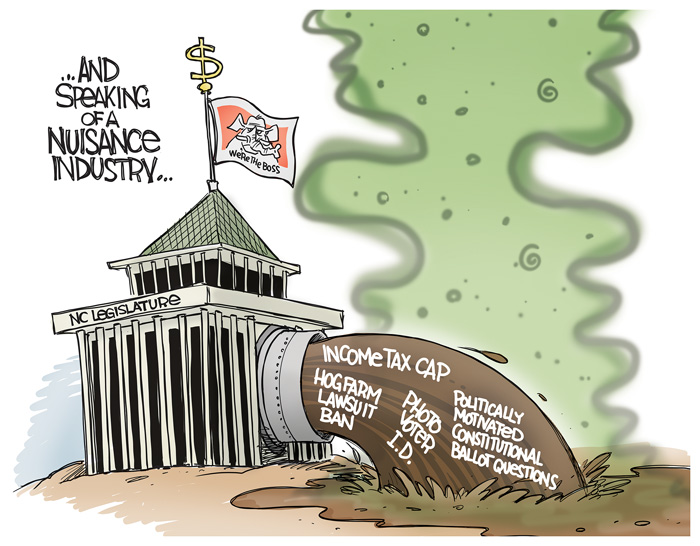 RALEIGH — At the beginning of this year’s legislative session, a reporter asked Republican leaders if they planned to take any more powers away from Gov. Roy Cooper.

“Does he still have any?” Senate leader Phil Berger asked with a laugh. “If you have any suggestions, let us know,” added House Speaker Tim Moore.

Someone must have sent in suggestions, because the governor is weaker now than when the session began in May. Several constitutional amendments on the ballot this November could shift even more power to the legislature.

Some of this session’s power grabs were minor: One bill stops Cooper from picking trustees for a community college in Cleveland County. But Republicans waited until the final weeks of the session to really stick it to Cooper. The legislature finally took action on Cooper’s appointments to key state boards and judicial seats, some of which were nominated more than a year ago.

About half of them were rejected along party lines. Republicans offered reasons for opposing some picks — one was involved in a lawsuit challenging the legislature’s actions, another wasn’t pro-business enough.

But legislative leaders refused to give a reason for rejecting one State Board of Education pick and a nominee for special Superior Court judge. Both men were well qualified for the jobs. No one said anything negative about them in the floor debate.

We reporters asked House Majority Leader John Bell, R-Wayne, why he called on his party to vote against J.B. Buxton, the State Board of Education nominee. “A number of the members had concerns,” he replied. We asked him to elaborate. “It was a number of examples,” he said, declining to provide any.

Legislative leaders seem to have forgotten that they have a responsibility to explain their actions to the people they represent. While the average North Carolinian probably doesn’t care who serves on the Board of Education, they do expect their representatives to be honest and transparent.

Left to speculate on the GOP’s motives, Democrats insinuated that racism could be involved because the judicial nominee, former Department of Public Safety Secretary Bryan Beatty, is black. I don’t think that’s the case because the other rejected nominees are all white. I think legislators deliberately waited to vote down Cooper’s picks until the end of the session so he wouldn’t have time to submit other candidates.

That will leave the seats in limbo for the rest of the year. And by then, Republicans might have succeeded in changing the state’s constitution to put the legislature in charge of filling those positions. That’s the likely impact of a proposed amendment on the ballot in November that says the legislature “shall control any executive, legislative or judicial appointment.”

The provision doesn’t get more specific, but it has the potential to turn the governor into a figurehead who does little more than cut ribbons and tell residents to be careful during natural disasters. That’s why the amendment is opposed by former governors, including Republicans Jim Martin and Pat McCrory.

But voters might not realize the amendment shifts power from the governor — who we all get to vote on — to the legislature, which is run by a handful of people who aren’t elected statewide. The question on the ballot is deliberately vague. It asks voters if they want “to clarify the appointment authority of the legislative and the judicial branches.”

It’s fine to ask voters if they want to massively change the balance of power in the state, but they deserve a chance to fully understand the impacts. And Republicans should be careful: One day, we might elect a GOP governor and have Democrats leading the legislature.

If that happens, Democrats will be laughing at the Republican governor and his or her oversized ribbon-cutting scissors.