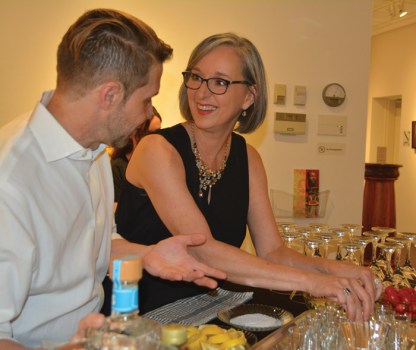 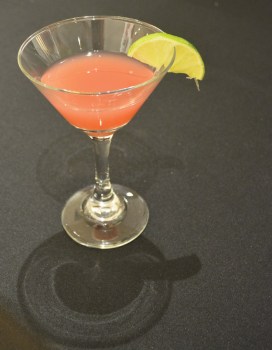 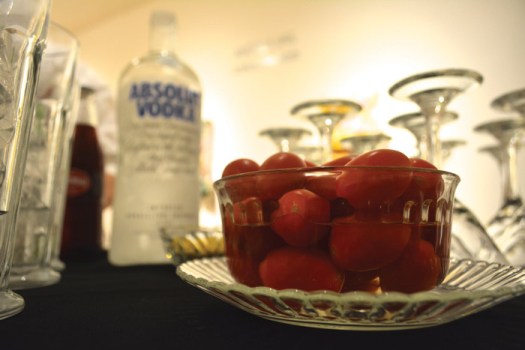 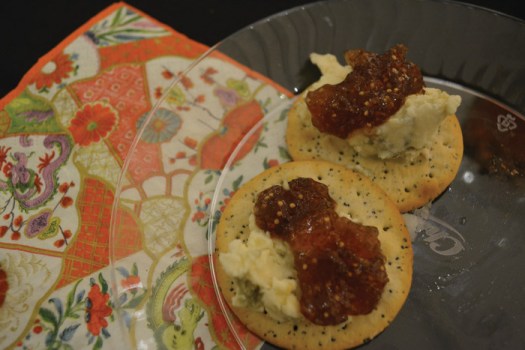 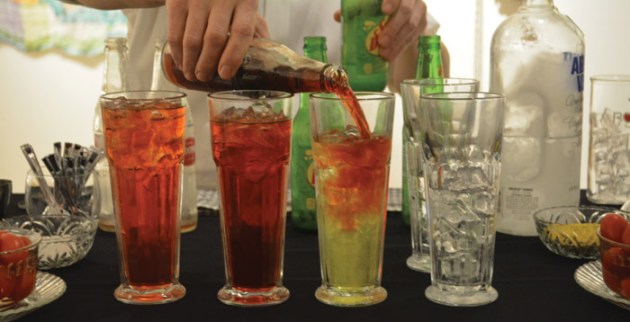 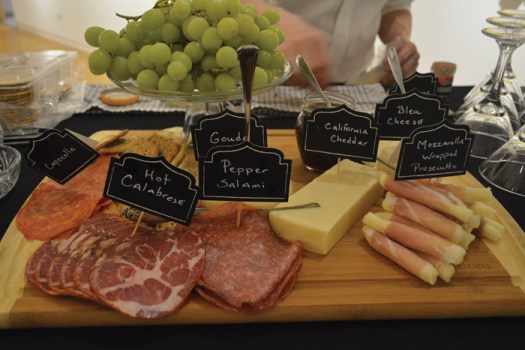 When the evening begins with instruction on how to correctly do a shot of tequila, you know you’re in for a good time.
The five-part ARTpops series concluded Thursday, June 21, at Waterworks Visual Arts Center with Rick Anderson. Every third Thursday beginning in February, adults had the opportunity to attend mini classes on calligraphy with Carole Simmons, quilting with Judy Kandl, table design with Tom Wolpert, and watercolor with Marianna Foster Smith.
Anderson, owner of Sidewalk Deli, was the final presenter with a culinary arts presentation on appetizers and summer cocktails — an appropriate topic for the first night of summer.
“Pace yourself!” Anne Scott Clement, executive director, told the 13 attendees as the evening began in the main gallery. “We’re delighted to have all of you. Enjoy the gallery, the new Color Outside the Lines exhibit, and please take the time to enjoy the art while you’re here.”
“We’re awfully lucky to have Waterworks,” Anderson told the group. “Who the hell would have thought I’d do a presentation here? Me? Really?”
Clement passed around a tray of tequila shots, and Anderson advised the group to rub a lemon slice between their thumb and forefinger, dip the area in salt, lick the salt, sip the tequila, then suck the slice of lemon.
“Lick, sip, suck,” Anderson repeated several times.
“This is smooth. Scarily smooth,” board member Marianna Swaim said.
Anderson said he was lucky to be from Salisbury, where his dear friend, the late Bert Oestreicher, often enjoyed grape tomatoes by the pool.
But not just plain ol’ tomatoes. Tomatoes marinated in vodka, then dipped in lemon pepper. Rachel Bernheim, Oestreicher’s daughter, makes a version that’s marinated in tequila, then dipped in sea salt. Participants tasted both to determine their preferences.
“It’s a great way to eat veggies!” said Sea Heno, who was there with her mom, Joyce Yates.
“What a snack!” said Andrew Poe, a senior at Catawba, who’s worked with Anderson at Sidewalk Deli. He also happens to be my son, and had invited me for a mother-son outing.
Sharon Beck lives in China Grove but grew up in Salisbury, and is trying her best to move back to her hometown. She attended with her daughter, Melanie, a senior at UNC-Pembroke.
“I thought it would be a fun mother-daughter evening,” Beck said. “I did have my husband drive us.”
Smart lady.
Next, Anderson prepared a cocktail called the Odell, named for his friend, Jason Williams, whose middle name is Odell. It’s made with equal parts vodka, Cheerwine, and Sun Drop.
Asked about the origin of this concoction, Anderson replied, “It was hot one summer, and I was 16.”
As Jenn Dunn sipped her drink, she said she’d seen the event on the Web site and it seemed like a fun thing to do. Meredith Eller and Kathy Leasure did, too.
“I told Kathy, hey, we gotta go somewhere Thursday night,” Eller said. “I really had to twist her arm.”
The two decided the Odell was the perfect beach drink.
Yates had gotten the class information via an email from Waterworks.
“I just asked my daughter if she wanted to come for summer cocktails and she said yes,” Yates said. “It’s a lot of fun. I’ve been saving these recipes on texts. I’m going on a hiking trip to Georgia to meet my friend from Alabama. I’m gonna marinate some tomatoes for her. We’re gonna go hiking and have fun when we get done.”
Anderson then assembled a charcuterie tray with meats and cheeses he’d either brought from the deli or purchased at Aldi. He said he was not a fan of antipasto trays and much preferred this appetizer.
“Aldi has these great weird cheeses you can’t always find,” he noted.
“I love stinky cheese,” Beck said. “The stinkier, the better.”
The tray featured a delicious blue cheese that wasn’t really stinky at all. Anderson encouraged the group to try it on a cracker then add a spoonful of fig preserves.
Everyone agreed it was delicious.
Clement passed around a tray of watermelon wrapped in prosciutto. The cantaloupe Anderson had purchased was not ripe enough, but the substitute fruit made for a different yet delightful combination with the prosciutto.
Digna Freirich attended after her daughter gave her the classes as a gift. She even called her beforehand on Thursday to remind her to go. Ed Oberle, sitting nearby, also received the classes as a gift. He was dressed appropriately for the occasion in a flamingo-print shirt and navy shorts. Also on hand was Waterworks staff member Hope Holmes.
Swaim signed up for the entire ARTpops series.
“It was a wonderful idea,” she said. “We got a glimpse into a different art form each time. Every single one has been so much fun.”
Swaim has been involved with Waterworks since she moved to Salisbury more than 34 years ago.
“I’m proud of Waterworks and what we have to offer,” she said.
Anderson, who wore a white polo shirt with madras pants, whipped up a Madras Martini that he said was as easy as 1, 2, 3: one jigger of orange juice, two of vodka and three of cranberry juice.
“The mixer for me is always optional — like underwear,” Anderson quipped.
He called the Madras Martini an upscale version of the Odell.
Anderson then presented a palate cleanser of lemon juice, vodka, honey and mint that had been frozen into cubes, then blended and poured into a scooped-out Meyer lemon.
“It’s labor intensive, but impressive,” he said.
Leasure pronounced it “grown-up lemonade.”
Oberle glanced around to see everyone pucker up.
“That’s something else,” he said.
The evening concluded with what Anderson called Tequila Sunsets: a gorgeous drink made with 1 part tequila, 3 parts orange juice and a splash of red grenadine, which settled at the bottom of the glass. Anderson garnished each drink with a maraschino cherry.
“Presentation is everything,” he said.