Rosella E. Caldwell, 100 years of giving from the heart 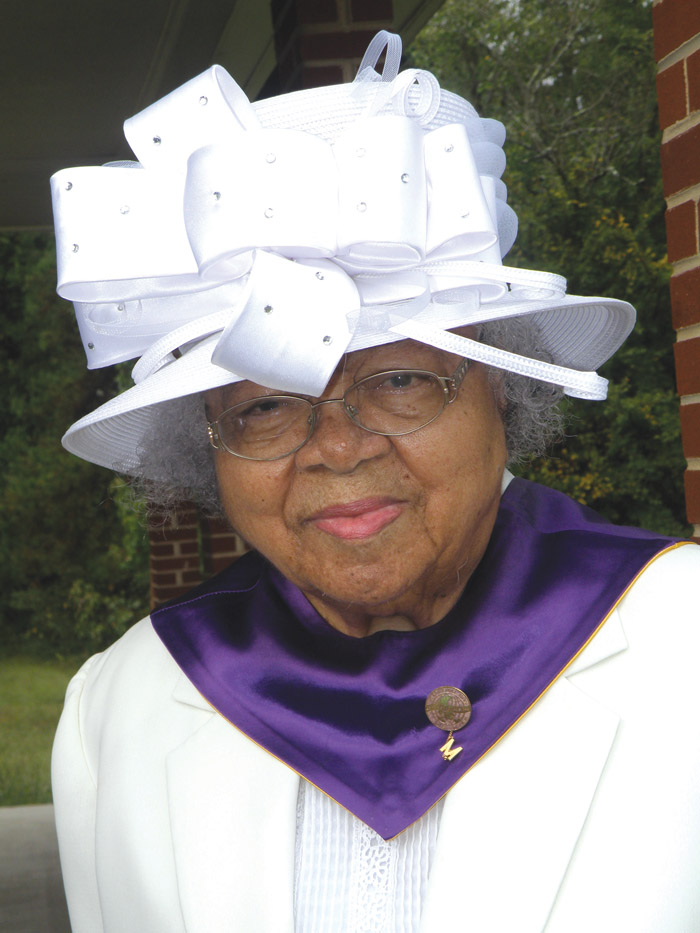 By Charmaine Roberts Parker
Special to the Salisbury Post

The year was 1918. A gallon of gas was 25 cents and movie tickets were 7 cents. It is also the year Rosella E. Caldwell was born on July 1. Today marks her 100th birthday and she is surrounded by loving family, friends, community members and former students for a celebration at First Reformed Church in Landis, NC. She is the beloved matriarch of the Sherrill Family, whose 40th reunion will be held in August at Lake Norman, NC. She has been an active lifelong member of Sandy Ridge AMEZ Church in Landis, leading its Stewardess Board No. 2, taking over the position in 1987 after the passing of her mother, Cardella Sherrill Caldwell. Annually, she spearheads its successful fund-raiser. She is known for her generosity, always remembering birthdays and charities. To this day, she sends monthly checks to college students.

Her giving nature also has extended to her kitchen. For decades, she cooked every Tuesday for about thirty people who would stop at her home for a Southern meal of baked chicken, pinto beans, tossed salad, cornbread and sweet potato pie. Once they took their plates home and tasted her delicious food, they were as satisfied as if they’d gone to a soul food restaurant. It was truly a meal from the heart.

When asked about her longevity, she says, “I’ve worked hard all my life. I’ve tried to help people all my life.” Her family and community view her as a symbol of faith, endurance and strength.

She was raised in Landis in a loving family with parents, John Franklin Caldwell and Willie Cardella Louis Sherrill Caldwell; three brothers, James Thomas, Carl Franklin and Percy Cecil; and sister, Elizabeth, popularly known as “Lib.” She graduated from James C. Price High School in Salisbury, NC in 1935 and from Livingstone College in Salisbury in 1939 with a Bachelor of Science degree with a major in science and mathematics.

She received a Masters degree from A&T State University in Greensboro, NC in 1960. Her first teaching job was at Johnsonville High School in Pineview, NC in 1940. On her first day of work, in addition to biology, the principal asked her to teach French, general science, chemistry, math and physics. He also asked her to be in charge of all music programs, including the glee club, spring commencement, and operettas for the elementary students. It was a full plate, and she did it all!

During her time at Pineview, she stayed with a local family and walked three miles daily to school. She would ride the school bus home. One of the daughters would wrap her legs with newspaper and elastic for her to walk on rainy days. In her first year, “I didn’t have money to buy boots.” She recalls the excitement when she received her first monthly check of $87 (“I thought I was rich.”) “When they told us we were going to make $100, we had a fit,” she says of her first raise. Her generosity kicked in as she shared her salary with her mother and siblings when she’d visit home.

She taught high school biology, chemistry, math and other subjects in North Carolina from 1940 to 1980. After leaving Johnsonville, she transferred to Peabody in 1943 in Troy and taught for 19 years. In 1962, she started at R.A. Clement in Cleveland, and transferred in 1968 to A.L. Brown in Kannapolis. While she coached basketball for about 20 years, she is tickled when she recalls, “I never played basketball in my life. I did not make a single basket. I didn’t touch the ball.” On one occasion, she utilized her sewing and creative skills when she made a uniform without a pattern for a plus-sized girl on the team. Her generous and motherly instincts also showed when she would retreat to the cafeteria and feed the team before games (they loved her meatloaf), and buy clothes for underprivileged students. Often she didn’t arrive home until 2 a.m. after out-of-town games, and she needed to be in the classroom the next day. She was a true trooper.

As a teacher, she says her science room was “filled with some of everything.” Students “brought dead animals and we’d stuff them and put on display.” Decorated with stuffed animals, it was considered a showroom. “Every time visitors came, they were taken to my room.”

She was multi-talented as a pianist who played for the church choirs and Vacation Bible School at Sandy Ridge. She also gave piano lessons.
During her 40-year teaching career, she says she never sent a student to the principal’s office for discipline. A principal once inquired why, and she responded, “I look at them and they know to straighten up.”

Nowadays, she enjoys the comfort of her den where her pastime is watching sports, especially her favorite, basketball. During the basketball and football seasons, both professional and college, one can expect her to be tuned in to games.

Some of her fondest memories include her oldest brother, affectionately known as “T,” driving her and seven other teens in a two-door car to high school in Salisbury and later driving her to college there. She also remembers riding with her siblings in the back seat of a coupe being driven by her uncle George Sherrill, a medical doctor in Lexington, NC. “I thought I was in heaven,” she says. Her uncle would offer fruit, nuts and candy. Occasionally on Saturdays, he first would take them to his office and later on shopping trips.

Overall, she reflects on her uncle Richard Sherrill who took her to meet someone in Greensboro for her first teaching position in Pineview. When the scientist/mathematician agreed to teach French, she was hired. Her uncle had assured her that by accepting the job offer, she would “get all the experiences you’ll ever need.” She adds, “And I think I did.”

Charmaine Roberts Parker of Clinton, MD, was born in Salisbury, NC and is the niece of Rosella Caldwell.