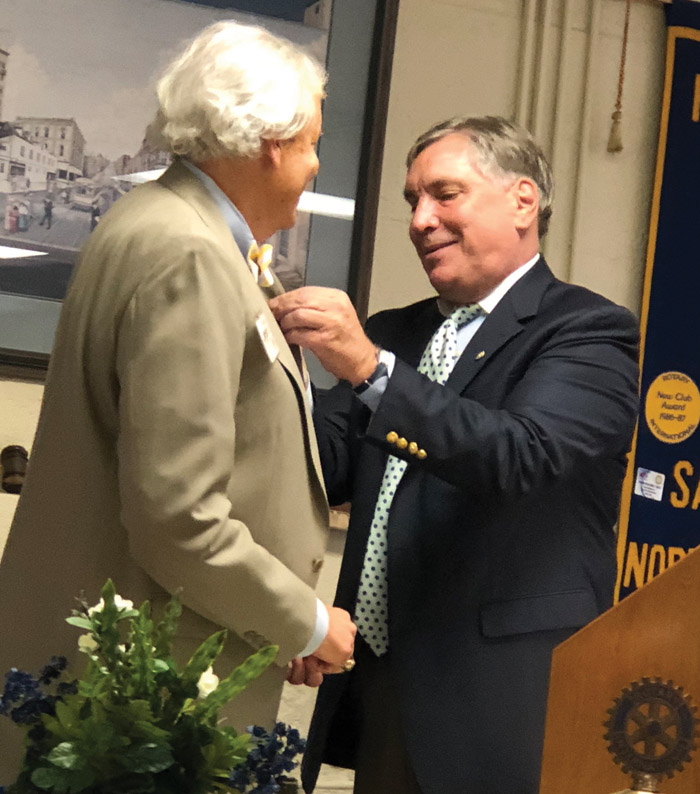 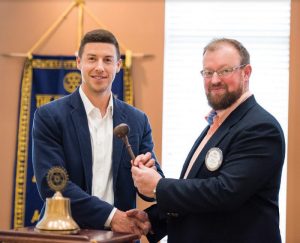 Waller Inducted as new Rowan Rotary President
By Tim Coffey, Rowan Rotary member
Seth Waller accepted the President’s gavel on June 28 from outgoing President Wes Thompson. Waller will lead the Rowan Rotary club for the next year.
“Rotary for me is about making a bigger impact in the community,” Waller said. “We have such a tight-knit group. The care and support that we have for each other is amazing.”
“We’ve got a lot of great community projects that we do – Service Above Self and Spooky Sprint. I look forward to building on those, as well as doing some other smaller community projects to get our hands dirty, stay involved and make an impact.”
Waller is the founder of Falcon Investments, a Salisbury investment advisory firm. He joined the club more than four years ago at the urging of then-President Jim Duncan. Waller’s wife Kristen and young sons, Charlie and Jake, watched Waller get sworn in.
Rowan Rotary was established over 30 years ago. The club meets weekly Thursday mornings from 7-8 a.m. at Trinity Oaks, 728 Klumac Road.
Note: there will be no meeting on July 5.

On Tuesday, Chris Bradshaw, outgoing President of the Salisbury Rotary Club summarized the club’s accomplishments for the year including successful programs for elementary children, funding of a local non-profit that benefits pre-school children and college scholarship program.

Bradshaw noted the success of the club’s Happy Feet program. The club partnered with the Rowan Salisbury Schools and the Shoe Show to provide tennis shoes to over 80 students in the third grade and their siblings. Neely Lawrence, Director of     for the Salisbury City Schools, facilitated the identification of students that could benefit the most from the program. The club raised over $2,500 to provide matching funds for a $2,500 grant from Rotary District 7680.

The club’s annual Tennis Tournament included over 60 participants and raised funds to support the Flag Concourse at the Rowan County Veterans Memorial at the Salisbury City Park. Reid Leonard directs the tennis tournament. For the past ten years, the Salisbury Rotary club has donated the proceeds from the tennis tournament to the Veterans Memorial.

The biggest event of the club year is the Rotary Raffle, held each April. The event includes dinner and a raffle ticket for each attendee. This year, the club raised over $21,000 for the Rotary Scholarship Trust Fund. In turn, the club presented scholarships to students attending Rowan Cabarrus Community College, Livingstone College and Catawba College valued at over $20,000.

President Bradshaw’s major goals for the year included starting an Interact Club at Salisbury High School and completing a club survey. The Interact Club is supported by Rotary and “seeks to bring young people together to develop leadership skills while discovering the power of Service Above Self.” Salisbury High Counselor, Tangela Morgan is the Interact Club Advisor. Interact member and Salisbury High Student, Isaiah Wood is attending the Rotary World Affairs Seminar at Carroll University in Waukesha, Wisconsin, June 23-29th. Wood is sponsord by the Salisbury Rotary Club.

The Elizabeth Maxwell Steele Chapter of the Daughters of the American Revolution has awarded an annual award and is known as the  Daughters of the American Revolution “Good Citizenship Award.” It is presented to eighth grade students who have demonstrated:
Honor, trustworthiness, truthfulness, and loyalty.
Service, with a responsibility to God, home and country.
Courage ….showing a determination to overcome obstacles.
Leadership….the ability to lead others, good sportsmanship. Responsibility and patriotism, or fundamental Americanism.
Recipients for this award in June, 2018 were Lauren Whisnant at Erwin Middle, Me’Lani McDonald at North Middle and Randel Brown at Knox Middle.