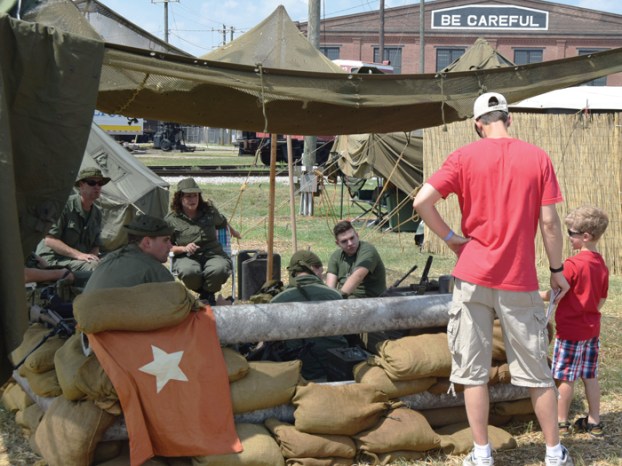 Re-enactors depicted military history from World War I through the Vietnam War at the N.C. Transportation Museum on Saturday. Rebecca Rider/Salisbury Post

‘It will bring you to tears:’ N.C. Transportation Museum salutes the troops

Re-enactors donned military gear, staked tents and laid sandbags on the museum’s 60-acre grounds to give visitors a taste of history — from World War I through the Vietnam War.

Salute the Troops is a relatively recent annual program, said Danielle Hough, events coordinator for the museum. But that doesn’t mean it isn’t making a summer splash.

According to Hough, more than 150 re-enactors took part Saturday, and the 175 open tickets for dinner and a performance by local band the Moonglows were almost sold out.

“Here at the museum, we just want to do our part to honor our veterans, past and present,” Hough said.

This is also the first year the program has included a fireworks show that’s open to the public, thanks to a donation by the town of Spencer.

For some, Saturday’s displays trace personal history. Don Woodward of Greensboro was stationed in Thailand during the Vietnam War. He and friend India Bruce lingered over indoor displays and strolled through the re-enactors’ set-ups, including a thatch enclosure representing Vietnam-area veterans.

“I’m proud of it,” Woodward said of his service.

While most Vietnam veterans were not received with open arms at the end of the war, things have improved in recent years, and it was never enough to diminish Woodward’s patriotism, he said.

For others, the re-enactments told a deeper story. Eric Kalamata, a re-enactor from northwest Virginia, was with the 101st Air Division Recon. Kalamata served with the 101st during his own stint in the military.

“So it’s like me portraying the history of my unit,” he said.

Kalamata attended last year’s Salute the Troops but said this was the first year his whole re-enactment unit participated. For Kalamata, being a World War II re-enactor helps capture the spirit of the Greatest Generation — which includes not just the soldiers who fought in the war but also the people at home who sacrificed luxuries, took up factory jobs, sent care packages or hunted for scrap metal.

“It was the Greatest Generation because it was America at its strongest,” he said.

There was also a touch of his personal past, as well. Kalamata’s parents both lived in Europe during World War II as children before immigrating to America as adults.

“For me, I probably wouldn’t even be here if not for the allies,” he said.

Donald Craig of Asheville said he barely missed qualifying for the Vietnam draft. But just because he didn’t serve doesn’t diminish his respect for those who did, he said.

“We love to support our freedoms,” he said. “If it hadn’t been for those guys out there in the grass, we wouldn’t be here talking.”

For others, Saturday’s displays hit close to home.

“When you see the history, it makes me swell up with tears,” said Salisbury native Jim Fox.

Fox is a Desert Storm Army veteran and commander of VFW Post 3006, as well as district VFW commander. Fox and the local VFW ran an inside display advocating for veterans. They handed out small paper poppies in honor of the fallen.

Fox said patriotism is synonymous with service and with the country that has welcomed so many into its arms.

“Patriotism, to me, means to have respect for our country and those who came before me to make our country what it is today,” he said.

America has come a long way since the founding fathers, he said. People have learned to look past differences, to accept one another, and to join hands to hold up the country they love, he said.

Fox said when he joined the Army, he swore an oath to protect his country from all enemies, foreign and domestic. He still holds that oath dear.

“Whether we’re in or out of the military, we’ve never relinquished that oath,” he said.

Saturday’s displays were, without a doubt, moving.

“It will bring you to tears,” Fox said.

Salute the Troops will be open from noon to 5 p.m. today at the N.C. Transportation Museum, 1 Samuel Spencer Drive in Spencer. Call 704-636-2889 for more information.

SPENCER — The Spencer Board of Aldermen got a preview of a proposed municipal complex June 13. On Monday, Keith... read more