Female Athlete of the Year: Everything looking up for Downs 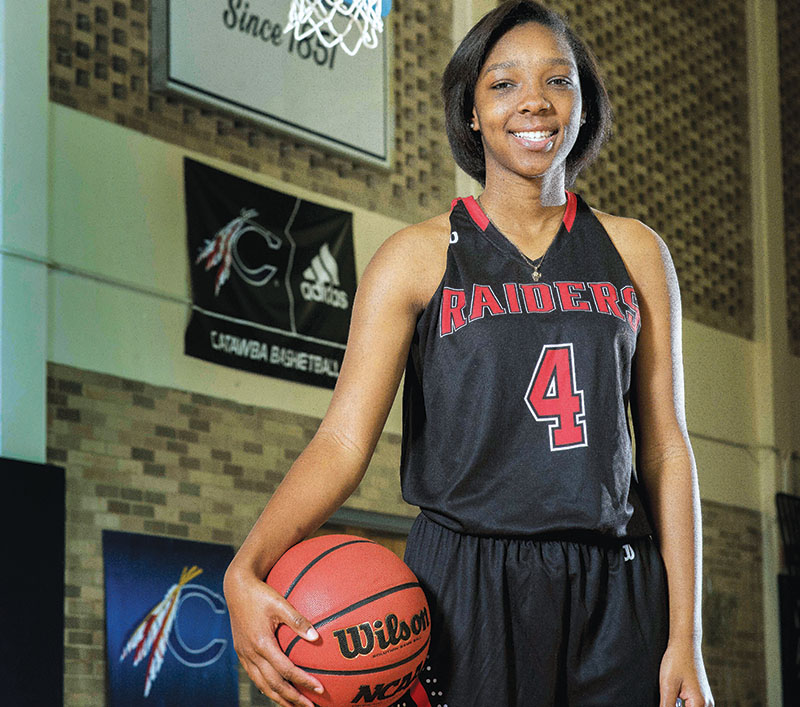 “I’d heard so much about Tracy Connor,” current South standout Janiya Downs said. “She came to see us at the Christmas tournament. It was wonderful to meet her.”

Downs’ initial impression of the 6-foot-2 lady who dominated the early 1990s in Rowan County and is now Tracy Connor-Riddick?

“She’s nice and she’s tall,” Downs said with a laugh.

Connor led Wake Forest University in scoring four straight seasons, was honored as Atlantic Coast Conference Rookie of the Year as a freshman and was first team All-ACC as a senior. She posted 42 college double-doubles, scored 1,619 points and pulled down 906 rebounds on her way to a plaque in Wake’s Sports Hall of Fame.

Basketball is the highest-profile sport for Rowan girls and Connor had a greater college hoops career than anyone else. That’s why Jeff Chapman of  Dynamic Fitness & Strength now provides the “Tracy Connor Award” annually to the Salisbury Post’s Rowan County Female Athlete of the Year.

The 2018 winner of the award is Downs, a rising senior who had a terrific 2017-18 school year in volleyball and track and field, as well as her main thing — basketball.

In her high school days at South, Connor was Rowan’s basketball player of the year three straight times (1990-92). In track and field she was one of the state’s best in the discus and the high jump, versatility that helped her claim the county’s female athlete of the year back-to-back in 1991 and 1992.

Downs is also piling up hardware at a frantic pace. She was county basketball player of the year in 2016-17 and also shared 2017-18 hoops award with Carson’s Olivia Gabriel. This is the first athlete of the year award for Downs.

“It’s a great honor because there are so many good athletes in the county,” Downs said. “There are a lot of players pushing me to be the best I can be in basketball, and I just have to keep working hard at everything I do.”

On the basketball court, Downs spearheaded South’s steady team progression from 7-17 to 14-12 to 18-9 the last three seasons. South was tough last winter, winning 14 times in a 10-team Central Carolina Conference that  boasted eight competitive teams and beating a 19-team win Salisbury team three times. South lost in the second round of the 2A state playoffs in a fierce scrap on the road against eventual state runner-up North Wilkes.

“We really did have a good team by the end of the season,” Downs said. “We’re going to miss the seniors we had because Riley Corriher and Tazah Hardin took a lot of the pressure off me. If we had those two for another year, I think we could win state.”

John Davis resigned as South’s coach after last season, but he relished the opportunity to mentor Downs, a 5-foot-11 point guard who scores, handles, dishes, rebounds and blocks shots with equal grace.  Down’s junior stats were awesome. She accounted for 22 double-doubles, with a couple of triple-doubles. She averaged 21.2 points, 12.8 rebounds, 3.3 steals and 1.9 blocks.

“She’s very talented, and she’s also got an edge to her that makes her a great competitor,” Davis said. “She wants to be the best at anything she does, and that drives her. She works at her craft. If the gym is open, she’s in there, and the more you work at something the better you get at it. She was really good as a freshman, but you can still see plenty of growth to her game every single year. I won’t be surprised at all to see her make another jump as a senior.”

Downs has been on the radar since she led Corriher-Lipe Middle School to a seventh-grade championship and followed that up with runner-up finish in the eighth grade.

Downs, who lives close enough to South to walk to school, has amassed powerful career numbers. She’s scored 20 or more points 36 times and she’s topped 30 points seven times, with a career-best of 38 against West Rowan her sophomore season.

She’s already scored 1,532 points. Assuming good health as a senior, she should shatter the school career scoring record of 1,795 points that Avery Locklear put up when Downs was at Corriher-Lipe.

The serious challenge for Downs is going to be becoming the fourth 2,000-point scorer in Rowan girls basketball since modern rules were employed in the 1970s. She’s on pace to join Salisbury’s Shayla Fields and North Rowan’s Sophilia Hipps and Stephanie Cross in the exclusive 2,000-points club. The ninth grade was junior high during Connor’s era, so Connor only got to play three high school seasons.

This summer is going to be immense for Downs as far as recruiting. She’s still wide-open as far as her choice of schools. She should get some Division I opportunities.

Athletes of the year generally excel in more than one sport. Downs did.

She was one of the county’s 10 best in volleyball, unstoppable, at times, last fall for coach Jenna Horne. She used her spring and timing to rule the net for a solid team that went 19-8 overall and 15-3 in the CCC.  She led the Raiders with 389 kills. She had 41 blocks, 249 digs and 30 aces. She was all-conference as well as all-county.

“The more I play volleyball, the more I like it,” Downs said. “But I’m not playing any volleyball this summer. I jammed my thumb last time I played, and I can’t take a chance on getting hurt before those AAU basketball tournaments.”

In the spring, Downs missed the Rowan County Track and Field Championships with a calf injury that limited her jumping, but she was able to compete in the CCC Championships, and proved to be one of the more versatile athletes. She won the long jump, took third in the 200-meter dash and placed sixth in the high jump.

Downs’ accomplishments in three sports made her the choice for athlete of the year, but there were many strong candidates.

Salisbury graduate Maria Capito was county co-player of the year in tennis, second team all-county in basketball and a starter for a championship soccer team. She was the Central Carolina Conference’s Female Athlete of the Year. Capito’s classmate, Julia Honeycutt, also was a viable candidate, one of the county’s finest in tennis as well as soccer co-player of the year.

McKenzie Gadson, who won the Tracy Connor Award as a Carson sophomore last season, shined again, one of the county’s top track athletes and first team all-county in basketball. Carson’s Gabriel not only starred for a championship basketball team, she was a factor in Carson’s cross country and track and field success. She doesn’t star in those two sports, but she was a senior leader on teams that won county championships. Carson youngsters Maci Cooper (tennis, basketball, softball, track), Lani Isley (cross country, basketball, soccer and track) and Kary Hales (volleyball, softball) were exceptional in multiple endeavors.

West Rowan’s Mary Sobataka, a rising senior, was one of the county’s best softball players and one of the top 15 in basketball. South’s Madison Lowery was the county’s runner of the year in cross country and also ruled the distance events in track and field.

But when coaches honored Downs as basketball player of the year for District 11, a multi-county area, that made her one of the best at the regional level. When she was named third team All-State by the North Carolina Basketball Coaches Association that meant recognition as one of the best on the state level.

“She’s a great person and a great teammate as well as a great player,” Davis said. “Special in every way.”