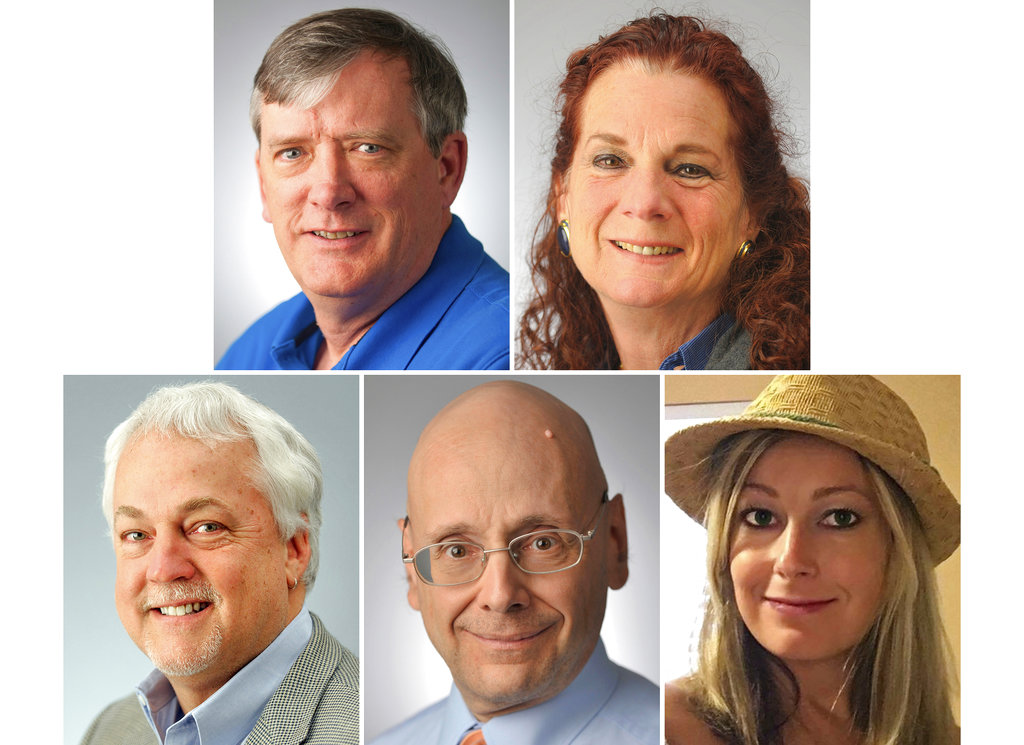 This photo combination shows the victims of the shooting in the newsroom of the Capital Gazette in Annapolis, Md., on June 28. Top, from left, John McNamara and Wendi Winters; bottom, from left, Rob Hiaasen, Gerald Fischman and Rebecca Smith. (The Baltimore Sun via AP)

The shots that killed five people at the Capital Gazette in Annapolis last week rang out across newsrooms nationwide.

Journalists are accustomed to dealing with people who are miffed or disappointed, but not anyone with a grudge so violent that he’d resort to mass murder.

The Annapolis shooting shook us all.

The first hours after the shooting were the most unnerving because we didn’t know what the shooter’s motive was. I was afraid it was political.

Talk of media being “the enemy of the people” has sparked some particularly angry messages sent our way in the past two weeks.

The messages seemed to put an exclamation point on the steady message of dissatisfaction and accusation we’ve heard from President Trump’s supporters in the 500-plus days since he took office. A couple of days before the Annapolis shooting, I forwarded a few of the angry emails to my boss, Publisher Greg Anderson, as a heads up. Maybe it was just because I was coming back from vacation and seeing it all anew, but the wrath seemed to be reaching fever pitch.

Waiting for police to share the shooter’s motive, a couple of TV talking heads alluded to the anti-media animus that the president has encouraged. But the Capital Gazette is a community newspaper, more than one broadcaster said — a paper that covers high school football and local government, a paper that looks out for its town and surrounding area. These people don’t have political agendas, they said.

In the midst of praise for the courageous law enforcement officers who rushed into the scene of the shooting, it was good to hear a passing nod to the work of local newspapers.

Then came the details. This was not a political act at all. The shooter was a known adversary of the newspaper, a man who sued for defamation after the paper reported on his court case and refused to back down from its story.

That relieved political worries, but the shooting was no less chilling. Five people were dead and others wounded because of a story in the newspaper — because journalists were just doing their jobs.

Now we newspaper journalists know what others have been through when someone in their field has been attacked — from people in churches to schools and even movie theaters. You realize “it could happen to me” and start plotting an escape route.

We’re no saints, but there is a feeling of mission in the field of journalism — at least at the local newspaper level where I have always worked. We went into journalism because we like to write and share people’s stories. Along the way we got hooked on keeping track of what’s going on in the community and getting the word out.

No one goes into newspaper work expecting to get rich. And no one who stays in journalism can afford to be supersensitive to criticism. It comes with the territory.

Within a few weeks of joining the Post in 1978, I realized our editor at the time, George Raynor, had rubbed more than a few people the wrong way. He was brilliant — a gifted writer and fine newspaperman. But some didn’t appreciate the pointed barbs in his editorials. And when readers came to the office to complain about how or why we covered a story, George was unsympathetic.

So one day when I heard a loud bang go off in the direction of George’s office, my mind jumped to the worst-case scenario —  someone had shot George.

Instead, he had thrown a firecracker into a metal trash can for an Independence Day prank. And he was pretty pleased with himself about it.

Now I feel guilty for retelling and chuckling at that story so many times through the years. Fellow news people have suffered a terrible tragedy in the line of duty. Life is not fair.

But news goes on, as it did in Annapolis. The Gazette staff did not miss a beat; they put together the next day’s paper that reported the slaughter of their co-workers.

That is perseverance. That is journalism. And that’s what makes me proud to be in the same profession as the men and women of the Capital Gazette.