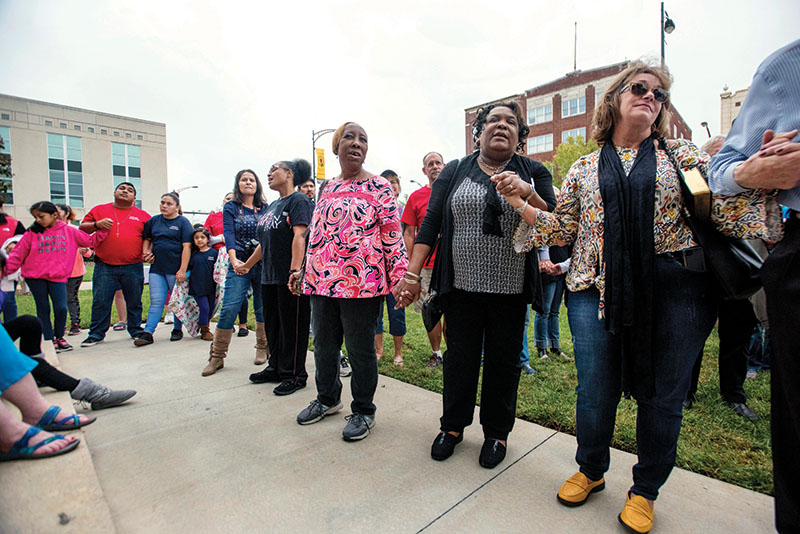 JON C. LAKEY / SALISBURY POST The participants in the Pray Rowan event joined hands for the final song by Alexis Greer. The rain held off long enough for an hour of prayers to be offered by several hundred Christians that gathered on the steps of the Rowan County courthouse on Saturday morning for the first meeting of Pray Rowan.

The Supreme Court’s decision not to take up the Rowan County prayer lawsuit may look like a rejection of the right to pray in Rowan County, but that is not the case. We are as free as ever to embrace our religion.

Scores of local churches are holding worship services today with no intervention from the government. A new movement called Pray Rowan is planning a countywide prayer gathering Saturday for all denominations at the Fred Corriher Jr. YMCA. And commissioners have continued to open meetings with prayer, led by a chaplain instead of themselves.

Prayer is alive and well in Rowan.

What the ACLU lawsuit and a string of court decisions have done, however, is stop county commissioners themselves from reciting exclusively Christian prayers at the open of every public meeting.

At the time the ACLU and three local residents decided to sue the county in 2013, then-sitting commissioners were inching close to proselytizing for Jesus in their public meeting invocations. Commissioners are free to express their faith, but praying in such a way in a government capacity — inviting the audience to stand and bow their heads along with them — was more than a mere formality. Though no one was forced to stay or participate, plaintiffs said they felt they were being coerced to take part.

In at least two courts’ eyes, commissioners’ prayers tipped the balance from an expression of their own free speech and religious freedom to a government practice of religion that violated the establishment clause.

As Judge Harvey Wilkinson wrote in the 4th Circuit Court of Appeals ruling, “free religious exercise can only remain free if not influenced and directed by the hand of the state. On this score, the county simply went too far.”

It would take a legal scholar to explain how this ruling differs from those in similar cases across the country that have upheld public meeting prayers. Suffice to say the courts have yet to give a definitive answer as to when and how public officials may pray in their government capacity.

Unfortunately, the Rowan case further muddies the water and could bring new restrictions to areas where officials’ prayers were low-key and had not raised objections. Had commissioners agreed to a moment of silence rather than sectarian prayer — a practice more welcoming to people of all faiths — this precedent would not have been set.