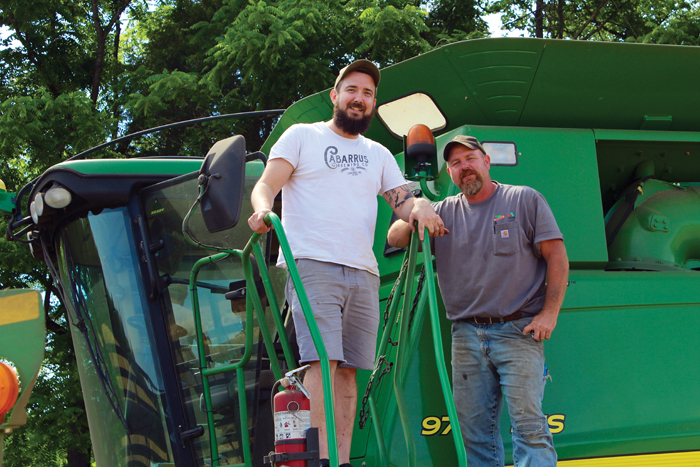 “It was the right thing to do,” said Steve Steinbacher, who cofounded Cabarrus Brewing in 2015. “We’re asking our customers to buy local, so we’re going to do the same.

“Authentically local beer is locally grown, and that’s what we’re here to offer.”

Carolina Malt House, the malt supplier, has always obtained all of its raw grain from within a 30-mile radius of the production facility just outside of Cleveland along U.S. 70.

“We saw North Carolina’s booming brewing industry, and we’re homebrewers from here in the middle of the grain belt, so we knew it would work,” said Aaron Goss, Carolina Malt House co-founder.

“When we started, we didn’t realize the barley quality would be as good as it turned out to be; I think we’re in the best area in the world for malt production. There’s a local flavor that comes through that’s really delicious. Jason, Jerod and their team make really great beer, and we’re glad our malt can support that.”

Just like a chef chooses the best ingredients to prepare an excellent meal, a brewer has to choose the best malts, a Cabarrus Brewing press release said.

“The beer tastes better,” says Jerod Lanam, one of Cabarrus’s brewers. “When we brew with their malt, we can tell it’s fresh. It smells great in the mash and it comes through in the beer.”

Working with Carolina Malt House, Cabarrus’ brewers can even go into the field at harvest to see the barley their malt will be made from. This year, Lanam and Jason McKnight, Cabarrus’ head brewers, both participated in the harvest.

“If wine is made from grapes, beer is made from malt,” says Goss. “Lots of people have heard about hops, and they’re a major flavor component of some beer styles, but malt is what makes beer. After water, malt is 90-99 percent of the beer recipe. If the malt is locally grown, the beer is locally grown.”

Goss also touts the health aspects of locally grown malt. “Because we’re in such a good growing area,” he said, “we’re able to monitor our growers’ fields and minimize use of pesticides. We’re going to drink this beer, we want to make sure it’s as healthy as possible.”

At this time, Cabarrus is using 100 percent locally grown base malt in all of its small batch beers and will work to incorporate more and more into their production beers such as Cabarrus Cotton Blonde and Vanilla Coffee Blonde over the next few months.

You can find these beers in the Cabarrus Brewing taproom in Concord and in restaurants, bars and grocery stores across the Charlotte metropolitan area.

Visit the company’s website at www.cabarrusbrewing.com for updates on which beers are being made with locally grown malt.