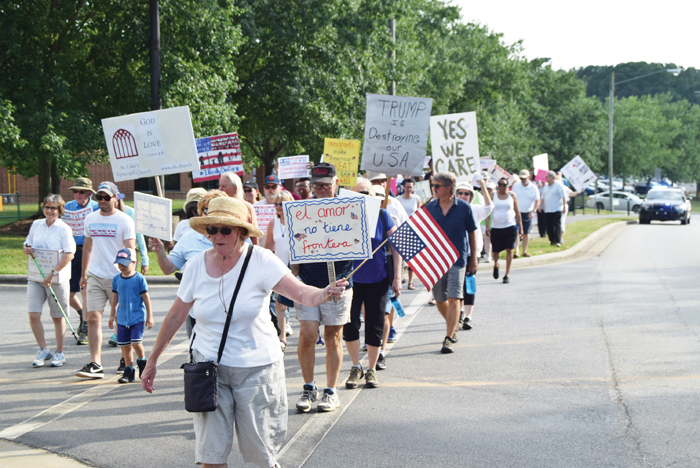 SALISBURY — Martha Sanburg stood at the side of the road on Brenner Avenue, holding a homemade sign proclaiming “Love has no borders” and a small American flag, flown upside down.

Drivers honked as they passed by or, in the case of one in an SUV, slowed and rolled down a window.

“What about American children?” a woman yelled from the vehicle.

Sanburg’s lips turned into a frown as she relayed the comment.

“I wonder if her children are in the back of her car,” she said.

Sanburg, a Gold Hill native, was one of dozens of people who lined Brenner Avenue Saturday to protest recent border policies that have separated hundreds of children from their parents and placed them in holding centers or camps. While a recent executive order stopped the separation of families, local organizers and protesters said they won’t be satisfied until the children and parents are reunited.

“I think (the executive order) is the first step,” Sanburg said. “But it’s not the end of it, because some of these parents have been deported, and they don’t know where their children are. What’s American about that?”

The scene was repeated in major cities and tiny towns across the country, according to The Associated Press. Hundreds of thousands of marchers flooded more than 700 marches, from immigrant-friendly cities like New York and Los Angeles to conservative Appalachia and Wyoming.

They gathered on the front lawn of a Border Patrol station in McAllen, Texas, near a detention center where migrant children were being held in cages, and on a street corner near President Donald Trump’s golf resort at Bedminster, New Jersey, where the president is spending the weekend.

“The aim of this is to really say, simply, that families belong together,” said Regina Dancy, one of the organizers of the Salisbury protest.

Dancy and co-organizer Renee McNutt are with Women for Community Justice, which partnered with the national Families Belong Together March for Saturday’s protest.

Usually, McNutt said, marches, rallies and other protests are held in Charlotte, Raleigh or Greensboro. When she and Dancy heard about Families Belong Together, they said they wanted to do something local.

“We have a migrant and immigrant community here,” McNutt said. “And we want to be supportive and encouraging.”

The two were “thrilled” with the turnout as people of all races, colors and creeds gathered on Brenner Avenue, preparing to march to Kelsey Scott Park off Old Wilkesboro Road. Local protesters included elected officials, faith leaders, business owners, immigrants, the old, young, liberals, conservatives and independents. And that, Dancy said, is how it should be.

“We’re hoping this is seen as a human rights issue,” she said. “… It’s not left versus right, it’s just right versus wrong — and this is wrong.”

For some marchers, it was personal.

Martha Walker of Salisbury is an immigrant herself.

“I think everybody should be treated the same, regardless of where they come from,” she said.

Dora Mbuwayesango has lived in Salisbury since 1995 but is originally from Zimbabwe. She said she knows, in some ways, what families who cross the border are going through. No one, she said, takes the risk these families are taking unless where they’re coming from is worse.

Mbuwayesango came to the U.S. in 1988 to attend college. While she was in school, Zimbabwe began to destabilize.

“So I stayed here and became a citizen,” she said.

She’s made a life here, but her heart still beats for those like her who have sought safety and a chance at a new life.

“(Immigrants) are human, and they need to be accepted and received, not tortured by being separated from their families,” she said.

Mbuwayesango said she sees being kind and receiving strangers as a religious obligation.

Dean Canaris agreed. Canaris is from Connelly Springs, but he said he and his wife spent the day going from march to march, lending their support to fellow North Carolinians. For Canaris, too, the issue is a religious responsibility.

“We really feel strongly that it’s biblical to love our neighbors as we love ourselves,” he said. “And there’s no law against that.”

As shadows lengthened, the protesters wound its way up Brenner Avenue to Kelsey Scott Park. There, amid the shade and green, they listened to stories shared by immigrants and concerns shared by local faith leaders. The protest ended with a candlelit vigil for the parents who are still separated from their children.

For Saturday’s protesters, the fight won’t be over until they’re reunited.