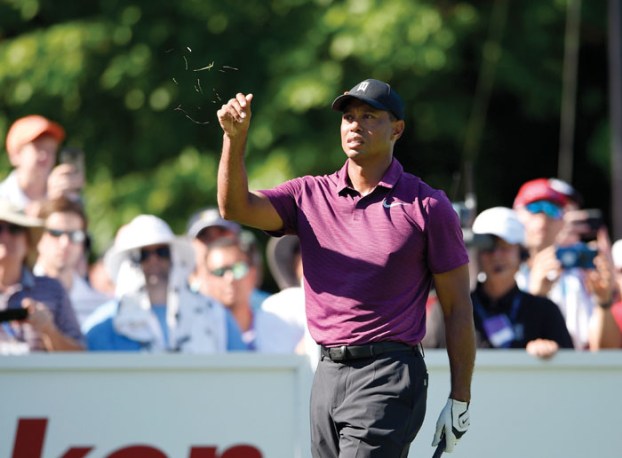 Tiger Woods throws grass in the air on the 14th tee during the second round of the Quicken Loans National golf tournament, Friday, June 29, 2018, in Potomac, Md. (AP Photo/Nick Wass)

Tiger shoots 65, in range going into weekend at TPC Potomac

Tiger makes move for the weekend 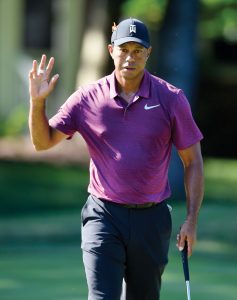 Tiger Woods waves on the 12th green during the second round of the Quicken Loans National golf tournament, Friday, June 29, 2018, in Potomac, Md. (AP Photo/Nick Wass)

POTOMAC, Md. (AP) — What once was a formality is now a pleasant surprise for Tiger Woods. He goes into the weekend at the Quicken Loans National without having to make up too much ground on the lead.

Woods chipped in from 80 feet for birdie after his only bad miss off the tee, made four of his six birdie putts from 18 feet or longer and matched his lowest score of the year with a 5-under 65 on a steamy Friday morning at the TPC Potomac at Avenel Farm.

He was tied for 11th, four shots behind Beau Hossler, Ryan Armour and Brian Gay.

“I’m not that far back,” Woods said. “The scores aren’t going to be that low and it’s going to be a tough weekend. It will be over 100 degrees and it will be a long weekend mentally and physically. I’m in a good position now.”

Not since the Valspar Championship during the Florida swing has Woods been this close to the 36-hole leader. He was tied for second that week in March, two shots behind, and he wound up one shot behind the winner.

The biggest difference was putting, and it all started with a mistake.

Woods hit two long irons on the 574-yard 10th hole just short of the green, leaving him 20 feet of fairway grass and then just over 80 feet to the pin. He had a putter in his hand during his long walk to the green and never put it back. Instead of a 56-degree wedge to hit a pitch-and-run, he tried using his putter .

“I shouldn’t have,” he said. “I was caught in between. Should I hit my little 56 and run it over the top? I figure the greens were a little bit faster early in the morning, but the fairways are a little bit dewier. In hindsight, no, I should have hit my 56.”

Not to worry. While the shot came up 25 feet short, he holed the birdie putt and was on his way.

Woods didn’t make a putt longer than 8 feet when he opened with a 70 on Thursday. He was rolling them in from much longer range in the second round, starting with his opening hole. After scrambling for a bogey on the 11th hole when his shot went into grass so deep he could barely see the golf ball, Woods bounced back with an 18-foot birdie putt he had to play well outside the hole.

“I hit good putts, started the ball on line and with the right seed, and they just didn’t go in,” Woods said of his first round. “So what? If I just continue to do that, which I haven’t done in probably about four tournaments, they’re going to start falling. And today, they fell.”

The big moment came on the 18th hole as he made the turn. He sprayed a drive well to the right into the rough, came up short of the green and then hit a perfect pitch that broke sharply back to the left and fell on its last turn as thousands in his gallery erupted.

Woods began to hit his stride on the front nine, ripping 3-wood from 282 yards onto the green at the par-5 second for a two-putt birdie, following with a 25-foot birdie on the next hole and spinning a wedge back to 2 feet for a tap-in birdie on the fifth.

For all the birdies, closing with two pars from the bunker was just as big.

Woods has struggled with finishing off rounds. He was one behind in the final round at Bay Hill when he drove out-of-bounds on the 16th hole for a double bogey. He was having a good final round at The Players Championship until making bogey with a wedge on the 14th hole, failing to birdie the reachable par-5 16th and taking double bogey on the island-green 17th with a tee shot in the water. Both times he had to settle for 69.

He saved himself Friday.

“I felt like I played well enough to shoot the score I shot, and I didn’t want to lose it on the last couple holes,” Woods said. “And I could have easily lost it. But I made two nice saves and was able to post 5 (under) for the day.”

And now he sees if he can make up ground on Saturday in the final edition of the Quicken Loans National.

Woods has two top 5s this year, though he has finished within six shots of the lead at only one tournament, the Valspar Championship.

“I think I’m not that far away from putting it together where I can win,” Woods said after his round. “Just be patient with it. A long way to go.”

By Mike London mike.london@salisburypost.com SALISBURY —  The golden year of 1955 was a time of winning in Salisbury. You could... read more