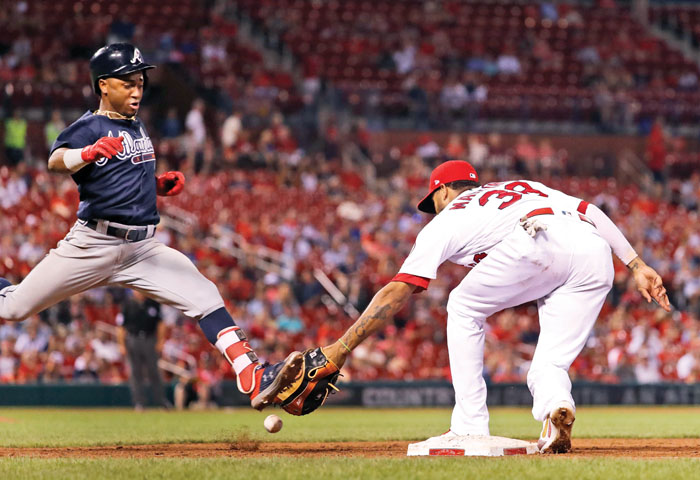 Atlanta Braves' Ozzie Albies, left, is safe at first for a single as the throw gets past St. Louis Cardinals first baseman Jose Martinez during the ninth inning of a baseball game Friday, June 29, 2018, in St. Louis. Albies went on to second on a throwing error by Cardinals pitcher Brett Cecil. (AP Photo/Jeff Roberson)

Teheran (6-5) allowed two hits, struck out four and walked two. It was the fifth time this season he has tossed six or more scoreless innings in 16 starts. He walked the first two batters of the game and then retired 15 of the next 16.

Dan Winkler picked up his first major league save by retiring the only two batters he faced as Atlanta won for only the fourth time in 13 games in St. Louis since the start of the 2016 season.

Miles Mikolas (8-3) gave up one run on seven hits in 6 1/3 innings for the Cardinals, who have lost two straight.

The Braves used successive singles by Camargo, Dansby Swanson and Danny Santana to load the bases with one out in the seventh. Austin Gomber relieved Mikolas and his first pitch glanced off Inciarte’s helmet for a 1-0 lead.

Camargo slapped a two-run double off Jordan Hicks in the eighth to push the lead to 3-0, and Swanson capped off the three-run inning with a run-scoring single.

Atlanta’s Ozzie Albies singled in the ninth to extend his hitting streak to a career-high nine games, and later scored on Nick Markakis’ sacrifice fly.

Kolten Wong grounded into a fielder’s choice with the bases loaded in the bottom of the ninth as the Cardinals avoided a shutout.

Rhys Hoskins, Scott Kingery and Carlos Santana homered for Philadelphia. Kingery was a triple shy of the cycle. The teams combined for 28 hits, including 16 for extra bases, on a steamy night in Philadelphia with the game-time temperature 90 degrees.

Font (2-3) allowed one run and one hit over five-plus innings before an injury forced him to leave the game. Diego Castillo, Chaz Roe, Sergio Romo and Jose Alvarado held the Astros in check the rest of the way. Alvarado got the final out for his second save.

Alex Bregman homered for the Astros, who lost for just fourth time in 22 games overall. Gerrit Cole (9-2) gave up three runs — one earned — and five hits in six innings to end his seven-game winning streak.

BALTIMORE (AP) — Mike Trout celebrated his return to center field with a solo home run and an impressive catch, and Los Angeles beat Baltimore to snap a six-game skid.

Back in the outfield after an ineffective nine-day stretch as a designated hitter, Trout hit his 24th home run in the first inning off David Hess (2-5) to spark the Angels to their first win in a week. The two-time AL MVP reached base three times and ran down a liner in the gap to rob Danny Valencia of a potential fourth-inning double.

Kyle Schwarber added his 16th home run, a solo shot in seventh, and Anthony Rizzo completed Chicago’s scoring with an RBI single in the eighth. The Cubs have won three in a row after dropping four straight.

Russell’s second homer in two days chased Jose Berrios (8-6) with one out the fifth and put Chicago ahead for the first time, 6-5.

Minnesota’s Joe Mauer homered among three hits and finished with a season-high five RBIs. Coming through twice with two outs, Mauer hit a three-run shot in the second and lined a two-run double off starter Mike Montgomery (3-2) in the fourth.

The Brewers won their seventh straight against the Reds, their best such streak against Cincinnati in franchise history. Milwaukee is 7-1 overall in the season series.

Broxton had an RBI single, a solo homer, and a two-run shot as the Brewers pulled away with five runs in the ninth inning. Broxton also dashed from third to score during a rundown play in the eighth.

Stroman (1-5) had not won since beating the New York Yankees last Sept. 24 in Toronto’s final home game of the 2017 season. The right-hander struck out four and didn’t issue a walk for the first time in nine starts this season.

Alcantara (1-0) struck out two and gave up five walks and three hits. The 22-year old right-hander was the top prospect acquired in the offseason trade that sent Marcell Ozuna to the St. Louis Cardinals. Alcantara made eight relief appearances for the Cardinals last season.

JT Riddle hit a three-run homer, and Lewis Brinson, who had three hits, also homered in a pivotal six-run third inning. New York’s Corey Oswalt (0-1) started in place of Jacob deGrom, who was scratched hours before the game to deal with a family matter. The Mets expect deGrom to start Saturday.

ARLINGTON, Texas (AP) — Shin-Soo Choo reached base for the 41st straight game and hit one of five Texas home runs in the first three innings against Chicago.

The Rangers have won 10 of their last 12 games. The White Sox reached their season’s halfway point at 28-53, one win better than the franchise’s worst record through 81 games.