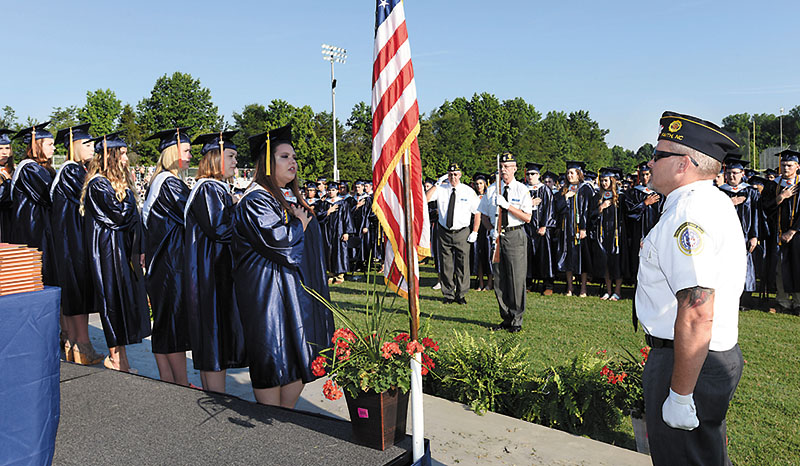 The Pledge of Allegiance at the Carson graduation in 2017. Photo by Wayne Hinshaw, for the Salisbury Post

Perhaps one of the most readable contemporary authors in the field of history is David McCullough. I first read his book, “The Greater Journey,” which tells the story of numerous Americans who traveled to Paris during the 19th century to study the humanities such as art, music, literature and medicine. He has also written about the Wright Brothers, the Brooklyn Bridge and John Adams, just to mention a few others.

Luckily, I found a book of his speeches about American history for a mere $5, rather than the suggested retail price of $25. Since I knew I wouldn’t be disappointed with the purchase, and it was cheaper than a Happy Meal at McDonald’s, I decided to buy it.

In the introduction to his book containing 15 speeches he had previously made, he commented: “Yes, we have much to be seriously concerned about, much that needs to be corrected, improved, or dispensed with. But the vitality and creative energy, the fundamental decency, the tolerance and insistence on truth, and the good-heartedness of the American people are there still plainly.”

Lines like those have made me a fan of Mr. McCullough because he still believes in the inherent goodness of America despite our current dilemmas.

As a high school teacher, I often hear kids say disparaging things about our country, realizing that most of them are merely repeating what they have heard at home. Sometimes I am able to address these negative comments if they are uttered as part of a class discussion, but at other times I choose to ignore them if I deem the comments unworthy of a response.

But oftentimes what I see is worse than what I hear. One example of this was the experience I had when administering an EOC exam the last week of school. When the announcement came on for students to stand and recite the pledge, not one student stood up. Not one. I was shocked.

I have been in classes where a few individuals chose not to participate in the pledge, and I fully understand their right to express their opinion publicly. But I had never in over 25 years of teaching witnessed an entire class ignore the pledge.

I realize that pledging allegiance to a flag is controversial to some, but the fact that over 20 students remained seated on this particular day forced me to see something I didn’t want to acknowledge.

To be fair, I have been in classes where 100 percent of the students stood up during the pledge. That is not as common as it used to be, but it does still happen. It makes me wonder, however, what I as a teacher can do to encourage the next generation to support their extended American family, even those with whom they don’t agree or understand at times.

Mr. McCullough also states, “Our history, our American story, is our definition as a people and a nation. It is a story like no other, our greatest natural resource, one might say…”

Hopefully patriotism and understanding are not in danger of being depleted like other crucial natural resources. If so, we better be looking for an alternate source of energy to fuel the American spirit.

As a teacher, I have to be willing to admit to my students when we as a country get things right and when we get them wrong, but they need to realize we all need to look out for each other if we’re going to improve. I wish that were a pledge we could all stand up for.

Clyde, Time Was: We didn’t know we didn’t have…