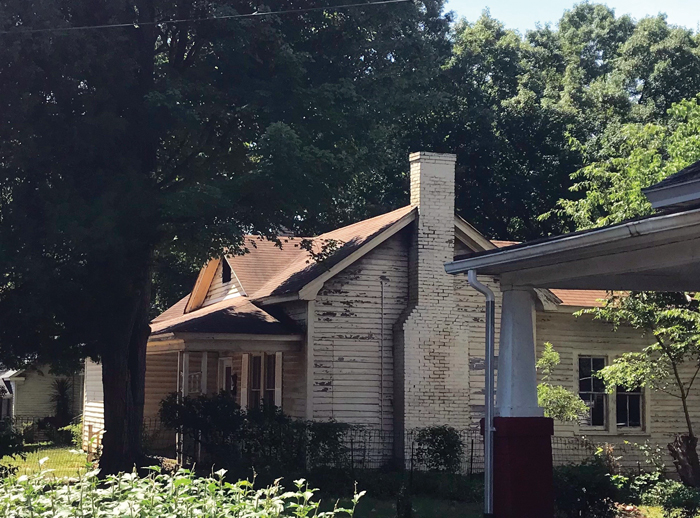 As part of its preservation mission, Historic Salisbury Foundation has recently bought and sold this house at 509 E. Fisher St. Mark Wineka/Salisbury Post

The preservation organization bought the house about eight months ago.

The one-story frame structure — located between South Clay and South Shaver streets in Brooklyn-South Square — was built about 1900 as one of D.A. Atwell’s rental houses.

The house was added on to in the back several times to increase its size and livability. In 2012, a fire in the addition badly damaged the house.

Its owner was not in a position to take on a renovation of the house and moved elsewhere. The house sat vacant and steadily deteriorated.

Anne Lyles, a longtime Brooklyn-South Square resident and Historic Salisbury Foundation board member, was not content to let the house remain in such a bad state.

“Lyles’ passion is historic preservation, and those who know her appreciate her tenaciousness,” Historic Salisbury Foundation said in a news release.

Lyles persuaded the owner to let the foundation take an option on the property.

With the option in place, volunteers along with Lyles’ son, Karl, cleaned out the house, covered holes in the roof with tarp, cut overgrown brush in back, and got the property to a point where it could be put on the market.

It took eight months to find a buyer willing to take on the house in its condition. It recently sold to a Charlotte-based group interested in rehabbing the house as a rental property.

The group has experience working with fire-damaged houses. The foundation placed covenants on the property that require the buyers to complete the work within two years.

The Atwell-Thompson House will be renovated, helping the block and the Brooklyn-South Square neighborhood, the foundation said.

“One of several hundred of Salisbury’s vacant houses will be returned to use,” the foundation news release added.

The foundation said it did not make a profit on the house, but Don Conner, chairman of the foundation’s real estate committee, said, “I consider this a win.”

Historic Salisbury Foundation often works to save properties that others find too daunting, reflecting the foundation’s mission of preserving, protecting and revitalizing the historic fabric of Salisbury and Rowan County.