Hospitality is a growing industry in Rowan County 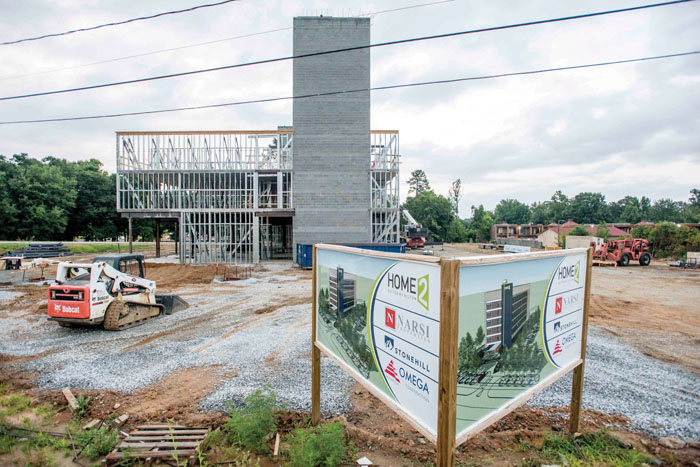 JON C. LAKEY / SALISBURY POST Several motels located along the I-85 corridor in Salisbury. The new Home 2 Suites by Hilton is under construction at Jake Alexander Blvd and I-85. Tuesday, June 26, 2018, in Salisbury, N.C.

SALISBURY — Over the past several years, Rowan County has been experiencing growth in an economic sector many take for granted in a small town: hospitality.

Since 2015, three new hotels have been built in Salisbury to accommodate the growing industry in Rowan County. The newest of the three, Home2 Suites by Hilton, is still under construction on Jake Alexander Boulevard, between the Econo Lodge and the I-85 on-ramp.

This rise in number of hotels and value of hotels throughout the Salisbury area represents the growth of the sector in the local economy.

According to James Meacham, CEO of the Rowan County Tourism Development Authority, the county has experienced 33 straight months of hotel revenue growth. Revenue from hotels is already up 15 percent since 2017 in the 2018 year.

“We continue to see record growth each year,” Meacham said.

Meacham is not exaggerating. Every year since 2009, Rowan County has experienced growth in the hotel industry. Meacham said that this is due in part to increases in both leisure and business travel.

Meacham cited events such as the Little League Eastern Regional World Series Tournament, A Day Out With Thomas and Polar Express as activities that draw people to Rowan County. He also said attractions like Dan Nicholas Park and Lazy 5 Ranch add to the growth.

Beyond hospitality, tourism is an important part of the Rowan County economy. In 2016, tourism infused over $166 million dollars in spending into Rowan County, employed 1,400 people and resulted in a tax savings of $102 per resident.

The new hotel, Home2 Suites, is expected to be completed by the late first quarter of 2019. Once completed, the hotel will add an estimated 100 hotel rooms to Rowan County.

“We are pleased to see healthy and sustained growth in Rowan County’s tourism economy,” Meacham said. “Growth in tourism is beneficial for the entire Rowan County economy.”