Girls on the Run camp offers friendship and fun 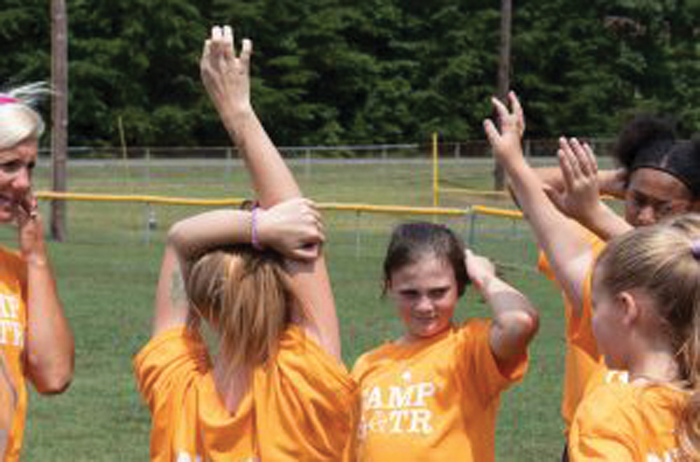 ROCKWELL — Nine-year-old Bailey, a student at Rockwell Elementary School, doesn’t like to run, but she plans to sign up for the running program Girls on the Run next year.

After attending the Girls on the Run summer camp at her school this week, she realized there is a lot more than running involved in the program.

“Everyone should come to Girls on the Run camp,” Bailey said. “It’s fun, and you get to exercise.”

This summer, Girls on the Run offered a weeklong camp to girls in grades three through five at Rockwell Elementary. Participants played games, performed skits, made crafts, and met new friends.

Girls on the Run is a curriculum-based program that creatively integrates running. Throughout the 10-week program offered during the school year, participants meet two days a week for a lesson on topics such as self-value, teamwork and community. Practices integrate these lessons and consist of running activities that build up to being able to run a 5k at the end of the season.

“It’s fun, and a lot of the running activities are game-based,” said Kristine Bienstock, program coordinator for Rowan and Iredell counties. “They really don’t realize that during a practice they probably ran two miles.”

The program also aims to include girls who do not like to run.

“Some girls join because they love to run, and some girls join to be with their friends,” Bienstock said. “We offer so much, there’s something for everyone.”

The countywide camp gave girls from different elementary schools an opportunity to meet new people. During the school year, the teams are divided by school and meet each other only at the 5k near the end of the season.

“They’re forming friendships they could have for the rest of the time they are in school here,” Bienstock said.

This year, Novant sponsored the camp, and organizers were able to provide scholarships to those with financial need.

Girls on the Run is also offering a camp in Mooresville in July that is open to residents of Rowan County.

In addition to running a 5k, each team plans and implements a yearly community service project. The organization completes about 60 projects each year in Rowan and Iredell counties.

“This camp has been a great opportunity to interact with Rowan County,” Bienstock said. “I get to be a coach to girls I normally don’t get to coach. It’s been really neat to see these girls all come together.”

For more information on Girls on the Run, visit www.gotrgreaterpiedmont.org.