Clyde, Time Was: We didn’t know we didn’t have air conditioning 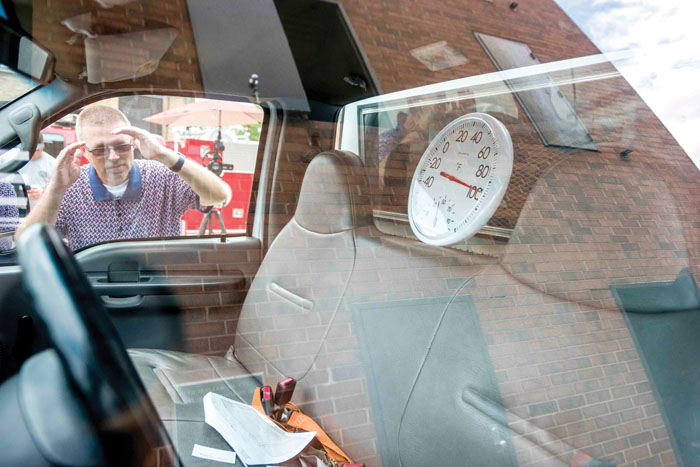 Rowan County Weather's Steve Monday checks a thermometer placed in a Salisbury Fire Department service truck with the windows up. The temperature inside peaked at 98 degrees after 35 minutes. Jon C. Lakey/Salisbury Post

Time was, we didn’t have air conditioning. And we got along just fine, thank you.

We always found ways to keep cool — oscillating fans with big brass blades over pans of ice from the Salisbury Ice and Fuel, hand fans with the Good Shepherd or church bulletins, hats with wide brims, parasols or avoiding the sun. But the best was a good ol’ shade tree. Or a hammock or glider on the sleeping porch.

“The budding twigs spread out their fan, to catch the breezy air; And I must think, do all I can, that there was pleasant there. If this belief from heaven be sent, if such be nature’s holy plan, Have I not reason to lament what man has made of man?” — William Wordsworth (1770-1850).

How did all those great minds of inventors, composers, writers and artists work in such heated frenzy, without the artificial comfort zone? What if, one day, it “got gone?”

Ice came in blocks delivered to your door. A card in the window placed your order, and the ice man cometh. We ate shaved ice. You kept it in the “ice box” before the Kelvinator or “Fridgideer,” forerunner of the “fridge.” “Ice cold” anything tastes better. Stores with the penguin sign pleased, “it’s cool inside.”

Willie and Millie sold Kool cigarettes to bide your time.

When you got “hot as a sweaty pig,” as the kid in history camp said her grandmother says, you simply opened the window, if it wasn’t stuck. If the window weights were broken, use a stick to prop it.

We practiced cross-ventilation with the help of the huge attic fan. Soothing night air was closed in with shutters that were lowered or blinds that are solid, ’til late afternoon.

Of course, you could retreat to Montreat, Blowing Rock, Sylva, Black Mountain, Vade Mecum or Healing Springs, all within a day’s train ride past Old Fort to Asheville.

“Pure mountain air, laden with wisps of fog, blew among the trees, then suddenly would thicken until we might seem to be the only living beings in a narrow world of mountain road, and in the abyss which might be wind in the trees or falling water deep in the gorge,” wrote Hope Summerall Chamberlain in “This Was Home.” Read all of it.

Locally, the Grubb plantation, South RIver, Flat Rock, Misenheimer or Corriher Springs offered respite from the heat of the city.

If you couldn’t getaway, keep the smelling salts handy or an asafetida bag for overheating in a crowd.

The hot air at City Council could use a little coolant of decorum, politeness and respect, and hot-headed citizen input seems to be in for a cooling off spell.

Make the best of your hot seat, sweat shop or overheated kitchen. Act like you’ve got enough sense to get out of the sun. Chill out. Get out of the hot box. Dress down.

Time was, your ankles could not be seen.  And corsets, garter hose, knee socks, neckties, starched collars and cuff links were the acceptable norm. Men in shorts were neither seen nor heard about.

President Harry Truman was criticized for his photo in a bathing suit. Some people have no excuse for what they wear. Uncovered muffin tops and clothing that looks like underwear is not acceptable, no matter how hot it is or you are.

Sure, Joe the mailman has cute knees, but we can only guess whether it’s boxers or briefs. Leave something for the imagination. Dress way-cool, but not lewd.

If you are “knockkneed” or bowlegged, be ready for comments or cover it up. Leave the hip huggers and low rise jeans for the statuesque models with a waistline. Seen any lately?

So, hang out in the air conditioning while you can. Don’t sit in the car with the motor running for us to breathe in your exhaust. Air, Latin aer, is “the elastic invisible mixture of gases, nitrogen, oxygen, hydrogen, carbon dioxide, argon, etc. that surround the earth.”

Thank God for air. Where would we be without it?