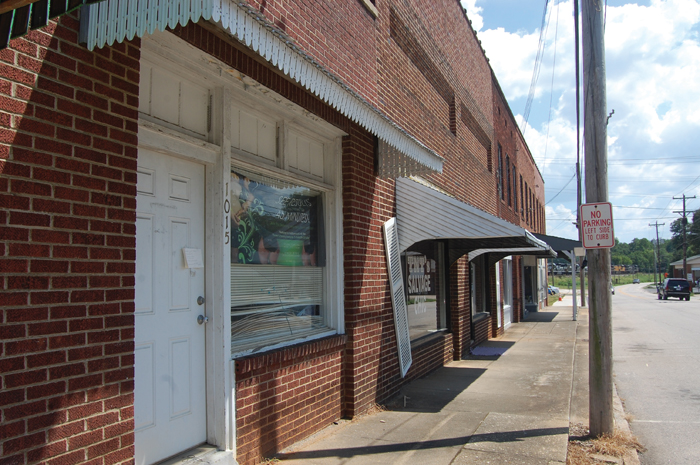 Mayor Lee Withers says China Grove is "open for business, open for conversation and open for ideas" when it comes to revitalization of its south end. Andie Foley/Salisbury Post

CHINA GROVE — Lee Withers says he’d like to see 300 new jobs brought to China Grove by the end of his tenure as mayor.

His personal goal is actually 500, a number he said is quite feasible in light of new and exciting developments in the southern Rowan County town.

“Somebody may say that’s crazy,” Withers said. “But we are in negotiations and talks that could double if not triple our tax base with what’s going to happen along the I-85/Highway 29 corridor.”

Withers said the new Old Beatty Ford Road interchange could impact China Grove because the town’s sewer lift station is the most economical means to extend services to that area.

“We’ve been in some contract negotiations and some conversations with the county and with the developer trying to make sure it’s the right thing to do for the southern end of the county,” he said.

A bigger opportunity for the town comes as Exit 68 becomes a full interchange, he said.

“We’ve been working very diligently with the EDC … which will hopefully help us attract some light industrial or advanced manufacturing in and around that area,” he said.

The work with the Rowan County Economic Development Commission involves about 300 acres along that interchange that is now going through the Duke Site Readiness Program, which provides landowners with marketing information for developers.

“People can say all they want to about bringing new homes to an area,” Withers said. “But without jobs, you don’t get homes.”

There are more large areas with similarly large potential in the eyes of the first-term mayor. A 40-acre stretch is the perfect place for a campground, he said.

“We’d be one of the only towns in North Carolina that would have a campground if we could get that to pull through,” he said.

The campground in combination with an ordinance allowing golf carts and other low-speed vehicles could be a real driver for commerce in China Grove’s business districts, he said.

Campers could bring their RVs and take golf carts into town.

“They really can’t go a whole lot farther than that, so it really encourages local commerce,” he said.

Moreover, those 40 acres of green space has access points to another area which Withers sees in need of revitalization: the town’s south end, near Coleman’s Music Shop and Holy Grind Coffee Shop.

“My vision, and everyone has their own, is to turn it into an arts district,” he said.

Scott Cannon and David Faw, employees of Coleman’s Music, said they’d love to see some attention brought to that area of town.

“We like to call ourselves the forgotten children of China Grove down here,” said Cannon.

He said with foot traffic as limited as it is, the shop does more business online and at guitar shows than from its storefront.

Faw said the empty shops in the strip next to Coleman Music have potential but would need some investment from the city.

“There used to be an antiques shop,” Faw said. “That definitely brought a lot of foot traffic, but the building didn’t have any heat.”

He said on colder days, the shop’s owner would have signs that said, “Will open when it warms up.”

Withers said a key to all these changes will be careful partnership and exchange with surrounding towns, what he calls the spokes in the wheel of Rowan County.