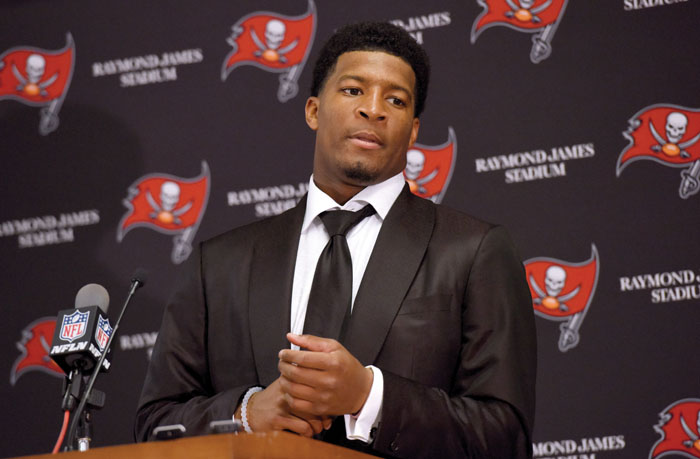 FILE - In this Nov. 27, 2016, file photo, Tampa Bay Buccaneers quarterback Jameis Winston (3) speaks to the media following a win over the Seattle Seahawks in an NFL football game, in Tampa, Fla. Winston was notified Thursday, June 28, 2018, by the NFL Special Counsel for Conduct, that he has been suspended without pay for the Buccaneers' first three regular-season games for a violation of the NFL's Personal Conduct Policy. (AP Photo/Jason Behnken, File)

TAMPA, Fla. (AP) — The Tampa Bay Buccaneers will open the season without quarterback Jameis Winston, who has been suspended three games for violating the NFL’s personal conduct policy.

Winston said in a statement released on Facebook that the NFL informed him of their decision on Thursday. The discipline stems from the league’s investigation of an accusation that the 2013 Heisman Trophy winner groped a female Uber driver during a ride the quarterback took in Arizona, where Winston was attending a charity event in March 2016.

The driver did not file a criminal or civil complaint, however she reported the incident to Uber. The NFL learned of the allegation, when it was reported publicly last November.

“The league promptly initiated a comprehensive investigation that included interviews with several persons, including the driver, Winston and others with relevant information,” the NFL said in a statement announcing the suspension. “The league also examined an extensive amount of other evidence, including telephone records, business records, data from electronic devices and other communications.”

The Bucs drafted Winston No. 1 overall in 2015, despite questions about the young quarterback’s behavior during his college career at Florida State.

Winston, 24, was accused of raping a fellow student at FSU, but was never charged. The university settled a Title IX lawsuit over its handling of the allegations with Winston’s accuser, Erica Kinsman, in January 2016 for $1.7 million.

Winston said in his statement Thursday that “in the past 2½ years my life has been filled with experiences, opportunities and events that have helped me grow, mature and learn.” Winston added that he has eliminated alcohol from his life.

He will miss the Bucs’ season opener at New Orleans on Sept. 9, as well as homes games against defending Super Bowl champion Philadelphia and Pittsburgh. He will be eligible to return to the team on Sept. 25, the day after Tampa Bay plays the Steelers.

The league said Winston is also required to have a clinical evaluation and cooperate in any recommended program of therapeutic intervention.

“All members of our organization are expected to conduct themselves in accordance with the personal conduct policy of the NFL,” the Bucs said in a statement. “We are disappointed that Jameis put himself in a position that has been found to violate the policy and accept today’s decision by the commissioner.”

HACKENSACK, N.J. (AP) — The brother of New York Giants cornerback Janoris Jenkins had an alleged altercation in his brother’s New Jersey home that led to the death of a 25-year-old man.

In releasing the complaint and the warrant against 34-year-old William H. Jenkins, of Fair Lawn, on Thursday, the Bergen County prosecutor’s office says Jenkins showed extreme indifference to human life in recklessly causing the death of Roosevelt Rene.

The complaint says William Jenkins got into an altercation with Rene on Monday night that resulted in Rene’s death. Jenkins then fled and was arrested later Monday by the New York State Police on an unrelated matter and held in the Ontario County Jail.

William Jenkins, described by the prosecutor as an employed music producer, has been charged with one count of aggravated manslaughter. He remains in custody in New York. No court appearance has been scheduled.

The prosecutor’s office did not immediately return an email from The Associated Press seeking the identity of William Jenkins’ attorney and a motive in the death.