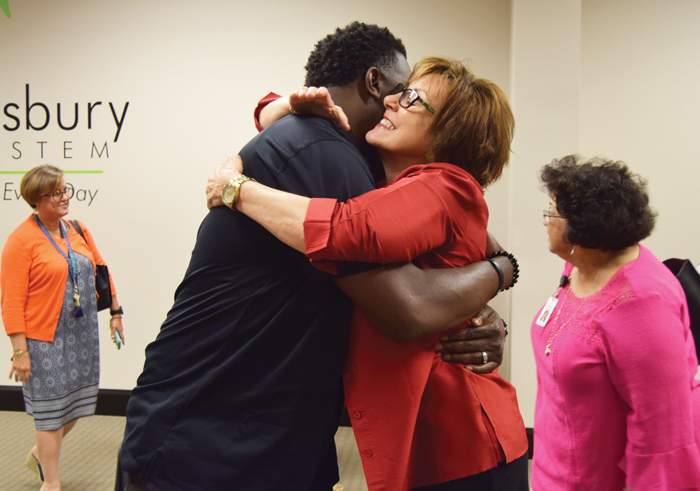 Superintendent Lynn Moody, right, hugs Isenberg Principal Marvin Moore, right, after the Rowan-Salisbury Board of Education unanimously approved applying to become a school district with charter-like flexibility. Rowan-Salisbury Schools is the only district in the state to be given this opportunity. Rebecca Rider/Salisbury Post

SALISBURY — The Rowan-Salisbury Board of Education voted to take the first steps towards becoming a renewal school district Thursday amid cheers and applause. The unanimous vote came during a 4 p.m. called meeting, and heralded the beginning of a period of transformation and uncertainty for Rowan-Salisbury Schools.

Rowan-Salisbury Schools is the only district in the state given the opportunity to become a renewal district, which will give all of its 35 schools charter-like flexibilities. Thursday’s vote approved a resolution and a drafted plan of procedure, which will be submitted to the State Board of Education.

“It is exciting. It’s also a little concerning because of the uncertainties,” Rowan-Salisbury Board of Education Chair Josh Wagner said. “… So we’re all trying to take it a day at a time. It’s a good thing, it’s a new thing; it’s something that I think we’ll all be very interested to look back in four or five years and see what transpired.”

The decision, Superintendent Dr. Lynn Moody said, is a historic one.

“Somebody said yesterday that the vote that you just took a minute ago would be the most important one taken in this school district since the merger, and it will change everything. I believe that’s true.,” she said.

Leading up to the decision, the board had a nearly two-hour called meeting earlier in the day with community members, administrative staff and community principals.

Moody spent the time explaining how the bill came about, and what it could mean for Rowan-Salisbury Schools in coming years.

House Bill 986, sponsored by State Sen. Michael Lee, representing New Hanover County, chose Rowan-Salisbury Schools a little bit out of the blue. Over the past few years, Moody said, she and others have worked hard to represent Rowan-Salisbury well, and to establish the district as an innovative place in the state and in the nation.

“We’ve been doing this work. We’ve been on this journey. We didn’t start it when the bill passed the house floor. …We got this opportunity because we were already on a journey, not because we were just starting it,” she said.

While she was at it, Moody would ask any elected official she came across to grant schools the same freedom as charter schools.

“I think every superintendent I know of has asked for this kind of flexibility in any arena they can. It was a surprise that we got this,” she said.

But when she made the comment to Lee, who chaired the N.C. Education Committee, he took her at her word. From there, the proposal, then draft, then bill moved with lightning speed up the ladder, passing the Senate 47-0, and passing the House on June 14, 93-12.

The rest, as they say, is history.

“When you’re given a chance to do something that you’ve dreamed about, that comes with a lot of weight and a lot of responsibility. We understand that we’re going to be under a spotlight,” Moody said.

Staff, too, have moved quickly, drafting a resolution and a plan of procedure due to the State Board of Education on July 15. Administrative staff and school principals have worked ’round the clock planning, dreaming and organizing for what could be the biggest change of their careers.

New flexibilities would give Rowan-Salisbury Schools control of funding, hiring, curriculum and calendar, among other things. But administrative staff divided everything into two categories — curriculum and governance. The former, Moody said, will be simpler, and is to some extent something the district is already doing. The latter, however would take the current district organizational structure and “turn (it) upside down.”

“I believe that we will need business partners to help us think about it in different ways,” Moody said.

She’s already heard from potential partners like Purpose Built, which offered to foot the bill or contribute to hiring consultants.

“We believe strongly that our plan will be developed in concert with our educators,” he said.

Once the State Board of Education gives approval, schools put together teacher-led teams to dream, plan and design their school’s new look.

The district will also need to conduct a needs assessment, as well as evaluate how guides such as the strategic plan are written — though there are no plans, he and Moody emphasized, to change the goals or outcomes for the strategic plan.

The board and district administration will also have to figure out which things will be non-negotiable across the district — will all schools follow the same calendar, the same curriculum and software? What about doing something like differentiated pay, or knocking out some assessments?

“Some of these can take a year or more to think about,” Smith said.

Board member Dr. Richard Miller asked how the district’s 35 schools could all be on the same page, when one school — North Rowan High — will start this year with charter flexibilities, 15 others have started planning for charter flexibility and the remaining 19 have not.

“Dr. Miller, I agree with you, that’s the most difficult part. …I will admittedly say we don’t have an answer. But that’s the answer we have to find,” Moody said.

The key, she said, was “to go slow so we can go fast.” The remainder of the summer and the 2018-19 school year would be time for planning and strategizing. The first visible changes likely won’t be implemented until the 2019-2020 school year.

Board member Travis Allen said he saw becoming a renewal district as an opportunity not just to innovate, but also to allow teachers to go back to strategies or teaching methods they’ve been forced to move away from.

Moody agreed, pointing out that Rowan County had many different communities with different goals and cultures. Giving the choice back to teachers and individual schools would allow communities to choose the type of learning most appropriate for their children.

“A big piece for us is this drive and passion to give the profession back to the teachers,” she said.

Allen also asked whether becoming a renewal district would in any way diminish the Board of Education’s authority. Here, the board’s lawyer, Ken Soo, stepped in.

“You don’t lose any authority unless you want to turn authority over on certain policies,” he said.

Miller asked whether the board would have to go through and rewrite all of its policies again. District staff said they would not, unless the board wanted to change something a specific policy addressed.

“So it’s ‘carte blanche’ except where ‘duly noted’ in the new statue,” Miller said.

Once passed by the State Board, the law goes into effect on the first day of the 2018-19 school year, Aug. 27 — but changes aren’t likely to be visible to students and parents.

In an interview after the meeting, Wagner stressed that Thursday’s vote was merely “the approval of an idea.” Change, he said, would follow slowly, and there are a number of steps to take before students notice any impact.

First, Moody said she would recommend that the board take Purpose Built up on their offer to fund a consultant. The board may also want to look into holding a longer retreat, to set up some guidelines and hard and fast district rules. Principals will begin recruiting teachers for teacher-led teams, and those teams will begin planning. Meanwhile, district administration will start looking at changing governance rules and forging community business partners to help manage a lump-sum budget.

Local elected officials and community members attending the noon meeting were invited to voice their thoughts. Rowan County Board of Commissioners Chairman Greg Edds said he, and the commissioners, were behind the district.

“We’re in support of this, and we hope the business community will see how important this is,” he said. “… We see this as a tremendous light at the end of the tunnel.

Lee Withers, mayor of China Grove, said that educators daily asked children to challenge themselves, to have faith and to believe.

“I just ask that you guys look in the mirror and challenge yourselves,” he told the board.

Dr. Jamie Durant, principal of West Rowan High School, said that the change to becoming a renewal district would be less difficult than what the state has been asking them to do.

“I think if you look at what we’ve been asking teachers to do the past couple of years, that’s more difficult than this,” he said. “… It’s going to be hard in the beginning. … I think it’s going to be exciting. I really look forward to it.”

South Rowan Principal Kelly Withers said that teachers have been asking for this level of freedom and flexibility for years — and that she believed the change would bring about an overflow of enthusiasm, not reluctance.

Board member Jean Kennedy spoke up in favor of the move, citing the importance of change in education if children were to grow and be properly prepared for the world.

“If not now, when?” she asked. We cannot continue to just do what we’ve been doing. … If I am the only vote today, I will be the only vote – I never look to my left anyways. I vote for myself.”

In an interview following the meeting, Kennedy said she believed that for change to happen in schools, the idea needed buy in from the staff, support from the community and parents and good leadership.

Susan Cox, board vice chair, broke into tears as she talked about the possibility of becoming a renewal district.

The vote, Wagner said, was a momentous occasion.

“There’s no question we have opportunities now we never had before,” he said. “If we don’t take advantage of it, it’s on us.”

There’s a lot of change in store for Rowan-Salisbury Schools over the next few years; and Moody and the board asked the community to step forward, to partner with schools through this turbulent time, to continue to support students and to extend patience and compassion — through the good, the bad and the ugly.

“Give us a chance,” Moody said. “Let us take some risks. Don’t be too critical when we fail — because that’s where innovation lives.”

Over the next year, the board and local schools plan to host town hall-style meetings in order to get input from the community on changes they’d like to see in their schools.