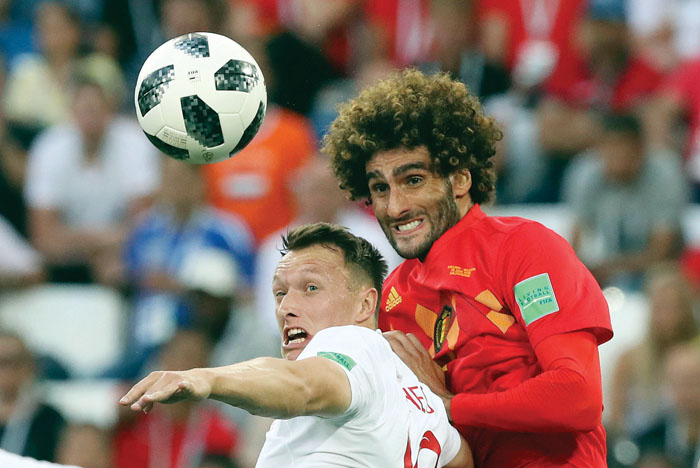 England's Ashley Young, left, and Belgium's Marouane Fellaini challenge for the ball during the group G match between England and Belgium at the 2018 soccer World Cup in the Kaliningrad Stadium in Kaliningrad, Russia, Thursday, June 28, 2018. (AP Photo/Czarek Sokolowski)

Such was the curious conclusion to the group stage at the World Cup on Thursday. Neither team needed to win and there was good reason for neither to even want to win.

Belgium did collect the three points, beating England 1-0, and secured first place in the group on Adnan Januzaj’s curling shot. But that might not turn out to be the desirable outcome since the victory diverted Belgium onto the tougher potential path to the final.

Although Belgium gets what appears to be an easier match against Japan in the round of 16, it could get trickier with a victory in Rostov-on-Don on Monday. Brazil, Portugal, France and Argentina are possible future opponents.

Thanks to a pair of opening victories for both, England and Belgium entered the Group G match knowing they were already in the second round. Belgium made nine changes and still won. England lost the top spot after dropping Harry Kane, the tournament’s leading scorer, and seven others.

England coach Gareth Southgate could barely contain his delight in finding himself on the less challenging side of the draw. His team will face Colombia on Tuesday in Moscow, followed by possible matchups against Spain, Russia, Croatia, Denmark, Sweden and Switzerland.

“We don’t suffer for (the loss),” Southgate said. “When you are a leader and a manager you have to make decisions that are right for your group and your primary objectives. Sometimes those decisions will be criticized … but you have to think about the bigger picture.”

For Southgate, it was as much about ensuring players like Kane did not pick up injuries in a game that wasn’t essential. The leading scorer in Russia with five goals watched the match from the bench. So did Romelu Lukaku, who has scored four for Belgium.

“We don’t like to lose, but tonight there were other factors that were more important,” Southgate said. “We know our strongest 11, but what’s pleasing is that there are guys that have put their hand up tonight to really push for a place.”

What could have been a tantalizing match between two strong European teams turned out to be a bit of a letdown.

England goalkeeper Jordan Pickford made an early save on a shot from Youri Tielemans. And after a fumble by Pickford, Gary Cahill made a goal-line clearance.

On the other end, Kane’s replacement up front for England, Jamie Vardy, tried his luck with a header. Marcus Rashford came closest for England at the start of the second half but his low shot was tipped around the post by Belgium goalkeeper Thibaut Courtois.

If the script was to avoid winning, Januzaj didn’t read it. Picking up possession on the edge of the penalty area, he shifted the ball around Danny Rose and curled it into the corner of the net in the 51st minute.

WITH WORLD CUP FIELD HALVED, HERE’S A LOOK AT WHAT’S NEXT

MOSCOW (AP) — The World Cup started with eight groups of four, 32 nations in all seeking to make it to the knockout stage. Colombia and — just barely — Japan grabbed the two spots from Group H in Thursday’s early matches, and England and Belgium sorted out the top of Group F later that night to solidify the field going forward.

Here’s a look at what’s next, starting with the round of 16 :

This half of the bracket features big names in two high-powered matches right out of the gate: A loaded France squad plays Lionel Messi and Argentina in Saturday’s early game, followed by Uruguay and Luis Suarez against Portugal and Cristiano Ronaldo , with the winners meeting July 6.

Belgium — one of the few top-tier teams to deliver on its hype so far — plays Japan, which sneaked out of its group because it got fewer yellow cards than Senegal. Monday’s later match pits Neymar and a Brazil lineup that seems to be finding its form against a mercurial Mexico squad that knocked off Germany and South Korea but got hammered by Sweden . The winners play July 6.

Sunday starts with Russia hosting Spain in Moscow’s main stadium, with the late game pitting Denmark, which hasn’t lost since the fall of 2016, against Croatia, which eased through its group with three wins. The winners meet July 7.

England will carry high expectations into its match Tuesday against a talented Colombia team after essentially choosing that matchup by fielding a squad of reserves in its last group game against Belgium. And the final game of the round of 16 features a Swedish side that won a tough group versus a Swiss team with issues in the back but enough talent up front to score against anyone. The winners play July 7 for the right to go to the semifinals.