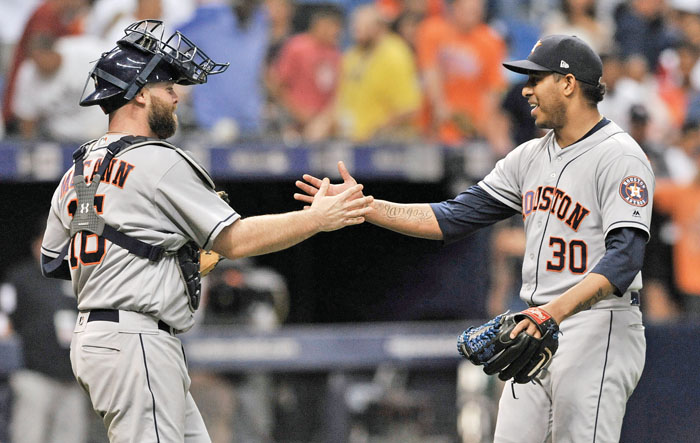 McCullers (9-3) gave up three hits while striking out seven. The Astros have won his last six starts and have won 18 of 21 overall. Their 11th straight road win matched the club record set last May 14-June 5 on the way to winning the franchise’s first World Series title.

The Rays, who had won five straight overall and eight straight at home, had runners on first and third with none out in the eighth against reliever Chris Devenski, but Matt Duffy lined into a double play and Jake Bauers grounded out.

Hector Rondon pitched the ninth for his fifth save in seven opportunities.

Boston completed a season sweep of the Angels for the first time since they joined the American League as an expansion club in 1961.

The Red Sox have won four straight and six of seven as they head to New York to open three-game series between the rivals on Friday night with first place in the AL East on the line.

The Cubs pounded out 15 hits, including four by Rizzo. Russell drove in four runs in the final regular-season meeting between the teams that played each other in the NL Championship Series the last two years.

They met seven times in 10 days, with the Cubs winning four games over the two series.

The Dodgers staked Kershaw to a 3-1 lead before he departed after five innings because of a pitch limit.

Greinke singled twice, drove in a run, stole a base and scored. He leads Arizona pitchers this year with four RBIs and four runs, raised his season average to .300, and is now 7 for 7 lifetime in steal attempts.

As for pitching, Greinke (8-5) won for the fifth time in his past six starts.

Hoskins hit a two-run shot in the seventh inning for his 13th home run of the year and a 4-1 lead that propelled the Phillies within two games of idle Atlanta for first place the NL East. Both the Phillies and Nationals entered this four-game set within striking distance of the Braves.

Nola (10-2) struck out eight and walked only two over 114 pitches and 7 2/3 innings. He has won seven straight decisions at home dating to last season.

Tanner Roark (3-9) struck out five over seven innings for the Nationals, who fell to 4-12 since June 9.

Thames gave the Brewers a 5-4 lead when he homered in the seventh inning off reliever Amir Garrett (0-1).

Eric Sogard added a sacrifice fly in the ninth.

Junior Guerra (4-5) gave up Jose Peraza’s second career leadoff homer and Jesse Winker’s two-run shot while getting his first victory since May 14. Corey Knebel pitched the ninth for his eighth save.

The last-place Reds were the hottest team in the NL Central heading into the game, winning nine of their last 10 games.

BALTIMORE (AP) — Nelson Cruz homered and drove in three runs, and Seattle utilized two errors in the 10th inning to complete their first four-game sweep at Baltimore in franchise history.

The Mariners improved to 8-0 in extra innings this season. They prevailed in 11 innings on Wednesday, and won the four games at Camden Yards by a total of six runs.

Juan Nicasio got three straight outs in the 10th for his first save.

Lowrie went 9 for 17 (.529) with two homers and three doubles in the set, driving in at least one run in all four games.

Detroit lost its ninth straight. The Tigers haven’t lost 10 in a row since their 119-loss season in 2003.

CHICAGO (AP) — Max Kepler drew a two-out walk with the bases loaded in the 13th inning to push Minnesota past Chicago.

Minnesota bounced back after the White Sox tied it with two outs in the bottom of the ninth when closer Fernando Rodney walked pinch-hitter Daniel Palka on four pitches to force in a run.