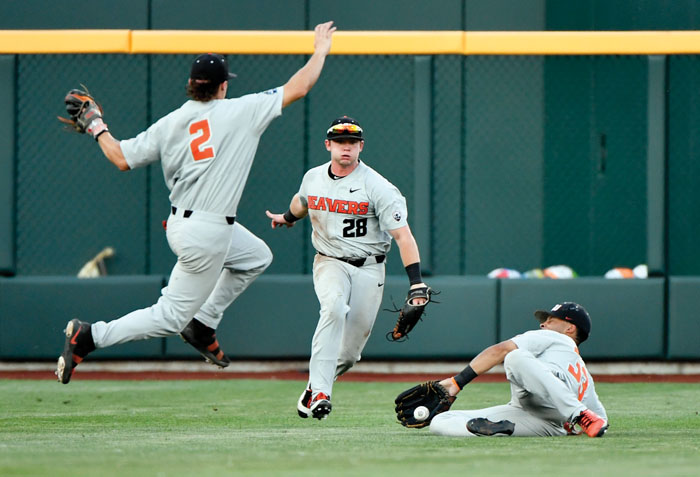 OMAHA, Neb. (AP) — Oregon State hadn’t been able to catch a break in the College World Series finals. And then the ninth inning happened Wednesday night.

Three Arkansas fielders watched a foul ball drop between them with two outs. If one of them catches the ball, the Razorbacks would have locked up the national championship.

Cadyn Grenier singled in the tying run, and Trevor Larnach followed with a two-run homer into the right-field bullpen to give the Beavers the lead in a 5-3 win that forced a third and deciding third game on Thursday night.

“As soon as you see the ball drop, you know you have another life,” Grenier said. “I needed to refocus and make the most of that extra life we got. That’s a gift.”

Arkansas (48-20) turned back the Beavers (54-12-1) when they threatened in the sixth and eighth innings, and they were in position to do the same in the ninth if not for the bungled foul ball.

Zach Clayton, who pinch ran for Zak Taylor after a walk leading off the ninth, was on third when Grenier came up to bat with the entire stadium on its feet.

On a 1-1 pitch from Matt Cronin (2-2), Grenier popped the ball high behind first base and toward the stands. There was plenty of room to make the catch, and second baseman Carson Shaddy, first baseman Jared Gates and right fielder Eric Cole converged. No one took charge and the ball hit the ground.

“I was running and didn’t hear anybody call it, and I overran it,” Shaddy said.

While the ball was in the air, Grenier said, he hoped it would flare off into the stands.

“I knew I hit it decently deep so it wasn’t going to be a routine pop foul catch,” he said. “It wasn’t. It landed in a spot between three guys, and it worked to our advantage.”

Cronin took a moment to compose himself, wiping his brow and adjusting his hat. His next pitch was way high and, after a foul ball, Grenier sent a drive into left field to score Clayton. Grenier pumped his fist as he ran to first and punched the air twice more when he rounded the base.

Larnach’s 19th homer of the season ramped up the celebration in the Beavers’ dugout. Kevin Abel (7-1), who pitched the eighth, gave way to closer Jake Mulholland in the ninth. The game ended when Mulholland fielded Casey Martin’s comebacker and threw to second to start a double play.

“You’ve got to move on,” said Arkansas coach Dave Van Horn, whose team had been 44-0 when leading after eight innings. “You can’t take it back. It’s over. Get your head up and start getting your mind right because it’s going to be tomorrow before you know it and we need to come out here and give ourselves a chance.”

The Beavers have been the hottest hitting team throughout the CWS but struggled to convert chances in the finals until they caught their huge break in the ninth inning.

They had runners on first and third with none out in the sixth when Kyle Nobach popped up a bunt that pitcher Kole Ramage caught. Ramage then threw back to third to double off Grenier, and a groundout ended the inning.

Adley Rutschman, who homered in the fourth, singled leading off the Oregon State eighth and was on third after a passed ball. Cronin came on, struck out Tyler Malone and got pinch hitter Steven Kwan to fly out.

Arkansas will send Isaiah Campbell to the mound for Game 3. Casey did not name his starter. The Oregon State said his pitching staff is spent and that whoever starts probably won’t go more than five innings.

Campbell (5-6) was outstanding against Florida on Friday, matching his career high with eight strikeouts.

“They’ve kept us in the game,” said catcher Rutschman. “We’ve had to use a lot of pitching. We’ve played a lot of games here. They are playing a huge part in our success. Hopefully we can keep that up for one more game.”