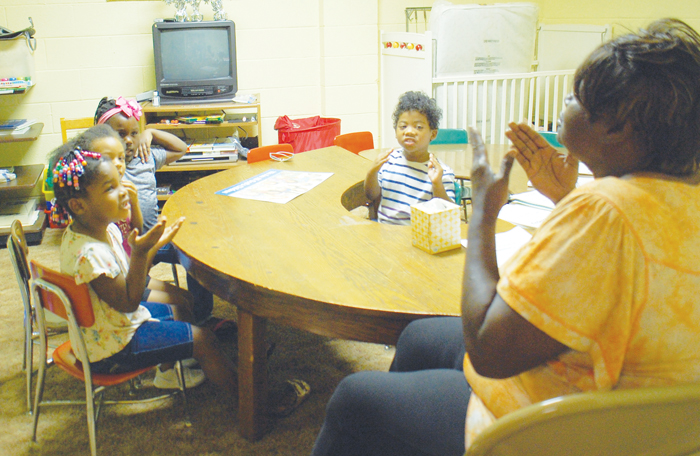 SALISBURY — When Salisbury Mayor Al Heggins stopped in at the FACT Reading, Music and Creative Expressions Camp on Wednesday morning, she couldn’t help but bring a book with her.

It was one of her favorite books, Heggins told the young campers in front of her. She has treasured it since college, and the thick anthology of African-American literature was worn from use and had many pages bookmarked with brightly colored Post-It notes.

Heggins read a poem, “When Malindy Sings,” published in 1913 by Paul Laurence Dunbar. It would be a tough read for today’s children, given the black dialect of the day that Dunbar employed, but the mayor’s listeners grasped the poem’s meaning.

They figured out that when Malindy sang, people paid attention because she was the best around.

In the church where she grew up, there was always someone who seemed to have the most beautiful voice ever, the mayor said. And Heggins bet that the children and adults listening Wednesday know someone with a special voice, just like Malindy.

Heggins found a captive audience during the third day of the FACT (Families and Communities Together) Reading, Music and Creative Expressions Camp being held all week at Trinity Presbyterian Church USA, 300 S. Caldwell St.

The adult leaders are all volunteers — many from local churches. Lunch has been furnished through the Rowan-Salisbury Schools Summer Meals Program.

Heggins was one of the camp’s special guests, and she answered several questions from the campers before they broke out into five classes based on age and grade levels. Adults even had a class, led by Yvonne Tracey.

Some of the questions put to Heggins asked whether she really is the mayor, does she like being mayor and could she send people to jail if they’re bad.

For the record, Heggins said sending people to jail is for the sheriff; yes, she is the mayor; and, “You know, I like being the mayor. It’s a lot of work, but what I like best is I’m serving you.”

She also was asked whether she has any brothers or sisters who are doing the same things she is.

“I’m the baby of the family,” said Heggins, the youngest of seven children. And, yes, like some of her siblings, she also has served in the military and has been a teacher.

The camp’s emphasis has been on reading, creativity and movement. The morning openings include a scripture reading, thought for the day and devotion, with a little music built in.

Shirley Holt, a founder of FACT with the Rev. Mary Hardin, said participants have been learning to express themselves, speak with confidence and the proper ways to meet and greet people.

“They really like to move,” Holt said of the kids, so they have enjoyed following the physical exercises provided by mime instructors Jakayla Kelley, 18, a student at Winston-Salem State University, and her sister Re’Anna Kelley, 14, a rising eighth-grader at Mooresville Middle School.

Some of the other volunteer instructors this week have included Da’Tarvia Parrish of Livingstone College, who was working with Koontz Elementary School teacher Deleah Dorsey on creative expression by learning either an important African-American song or poem.

This is the sixth year for the FACT program, which will offer its Skills and Drills Basketball Camp on July 30-Aug. 3 in Trent Gymnasium at Livingstone College. Camp hours will be 9 a.m.-1 p.m.. It is free and open to children 9 to 15.