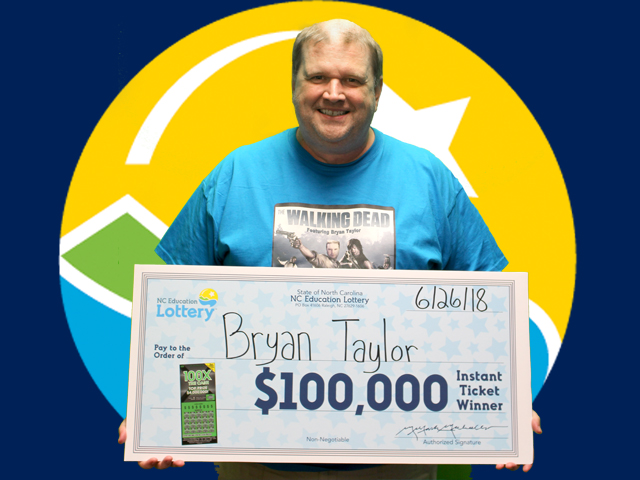 A Salisbury mortgage broker and a Kannapolis plumber have something in common now; they both won $100,000 N.C. Education Lottery games.

Bryan Taylor of Salisbury said he couldn’t contain his excitement after he played 100X The Cash and won $100,000.

“I was yelling and screaming,” Taylor said. “I started running around the store I was so excited.”

The mortgage broker stopped by the Yorkmont BP on Yorkmont Road in Charlotte on Monday and bought one of the $20 tickets.

“I couldn’t believe it at first,” Taylor said. “I had to double check and make sure I scratched it all the way. Even then I didn’t believe it until I scanned the ticket and it said, ‘Go to lottery headquarters.’ I was so excited I hugged the guy who sold it to me.”

Taylor claimed his prize Tuesday in Raleigh. After required state and federal tax withholdings, he took home $70,507. He plans to use some of the money to pay bills. He also wants to cheer on his favorite sports team.

“I’m a huge NFL fan,” Taylor said. “A trip to Dallas to see the Cowboys play is in my future.”

For Alonza Flynn of Kannapolis, numbers made up from the birthdays of his wife and kids won a $100,000 Powerball prize.

Flynn said he has used the numbers for the last year, buying $3 Power Play tickets whenever the Powerball jackpot crossed the $100 million mark. On June 20, with the jackpot weighing in at $150.4 million, he stopped at the Smokers Depot on Pennsylvania Avenue in Kannapolis to try again.

Four of the numbers matched the white balls and a fifth matched the red Powerball in that night’s drawing. Since Flynn had a Power Play ticket, the $50,000 prize doubled to $100,000 when a 2x multiplier was drawn.

Flynn confirmed the win and the two traveled straight to lottery headquarters in Raleigh to collect the prize. After the required tax withholdings, he received $70,644.

Flynn said he planned to use the prize money to pay bills, help pay for his daughter’s college next year, and perhaps take a vacation to Las Vegas or Greece.

The state lottery raises more than $600 million a year for education, including more than $7.4 million that supported education programs in Rowan County last year. For more information, go to  https://www.nclottery.com.