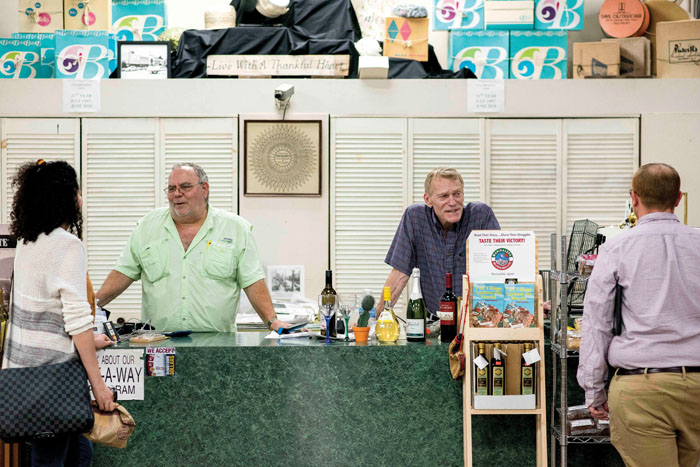 SALISBURY — To Von Poston and John Shuler, it probably seems impossible they have rambled around this monster of a building at 111 S. Main St. for just shy of 21 years.

During those two decades, as owners of Salisbury Square Antiques & Collectibles, they waged epic fights with the city — and usually won. They brought a little class to downtown with their wine-and-cheese, coffee-and-dessert shop in the basement.

They provided a home at one time to more than 100 vendors, did a million dollars a year in business and once employed seven people.

But they also kept plugging along during severe dips in the economy, such as the downturn after Sept. 11, 2001, and the recession that took hold in 2008. “Which a lot of businesses didn’t survive,” Poston says.

This week, Poston and Shuler signed the papers marking the sale of their business and building — what many old-timers still think of as the Belk-Harry building — to Salisbury resident Harrison Smith.

Their official last day will be Saturday, though Shuler will be helping the new owner in the weeks ahead with the changeover.

“Right now,” says Smith, a retired Navy officer and antiques collector himself, “it’s to make sure it’s a seamless transition.”

Smith acknowledges he has an ambitious five-year plan for the 42,603-square-foot building, which has three floors when you include the basement.

The parties did not divulge the purchase price.

For the immediate future, vendors will continue renting their spaces in the store, which has two elevators and front and rear entrances. Vendors sell antiques, collectibles and gifts.

Shuler adds, “It’s been a major part of our lives.”

Poston and Shuler bought the building in July 1997 when it had most recently been home to On Spring & Buffalo, whose original store was in Concord. But the structure itself dates back to the 1950s when Belk-Harry was a main downtown anchor.

Belk remodeled the store in the 1970s, and after Belk moved out of downtown for Salisbury Mall in 1986, a Belk Budget Fair operated for a while in the space.

Poston was entering the new business in 1997 after 13 years as a salesman with Dick Brooks Honda. The same day Dick Brooks sold the dealership to Gerry Wood, Poston and Shuler closed on the Belk building.

The men remember putting on suits and going to see George Kluttz at F&M Bank for their original loan.

They had to assume a loan that On Spring & Buffalo had with Belk and also pay the Concord company some money. Belk later called in that note, meaning Poston and Shuler spruced up and returned to F&M for more money.

In hindsight, Poston says, Salisbury Square Antiques & Collectibles did a phenomenal business in its best years. All three floors were busy and filled. At one time, there were 108 vendors.

In one instance today, Poston notes, a third generation of the same family is renting a space.

Poston and Shuler renovated the second floor to provide about 10,000 square feet of additional space for booths.

By the summer of 2000, they opened up 12,500 square feet in the basement for 50 more dealer spaces, besides a wine-and-cheese area that featured a climate-controlled wine cellar and refrigerated cases for cheese.

Racks of California redwood could hold as many as 3,000 bottles of wine and 110 cases of beers. There were free wine tastings and even a cheese consultant on occasion.

“The wine tastings were giving people so much knowledge,” Poston says, recalling how distributors would bring five or six wines — and plenty of information — to those events.

Sometimes 30 to 40 people would attend. On many occasions, folks would stay behind and socialize, and the men might open up the roof, which they dubbed “Tar Beach” because of its rock-and-tar composition.

Poston and Shuler added desserts and coffee in the basement, and they also had a gift shop for items such as wine glasses, cheese boards and coffee beans.

Today, the basement and upstairs are closed, but Poston recalls his successful efforts with the city to allow wine to be consumed on sidewalks outside the places where wine is sold — a fight separate from the one that allowed sidewalk dining.

Poston helped in writing that ordinance, too.

Salisbury Square Antiques & Collectibles also garnered considerable publicity in 1997 and 1998 as it went back and forth with the city over flags.

Out front and near the top of the storefront, the business was flying the U.S. flag and five foreign flags as a way to add a dash of style and color, especially when they were lighted at night.

Poston and Shuler were making use of four-decade-old brackets that Belk had once used for its flag displays. But the flags ran afoul of the city’s newer sign ordinance.

Over a year’s time, it took rulings and discussions by the zoning administrator, Zoning Board of Adjustment, Planning Board and City Council before an ordinance change allowed Salisbury Square Antiques & Collectibles to fly what became defined as “decorative” flags.

It didn’t hurt that at one point Poston and Shuler submitted a petition to the city signed by 1,000 people who thought the flags were attractive and should be allowed.

“Parking is a nightmare — and it will be in the future,” Poston says.

Poston and Shuler have a world of stories connected to their building.

In March 1998, an employee fell a story down the freight elevator shaft. She was on the second floor and had used the key to open the elevator, but the car was on the first floor.

The woman assumed the elevator car was on her level as she reached for a light and stepped into the shaft. She landed on top of the elevator car below, and the Fire Department had to be called for a rescue.

She was hurt, but not seriously.

The owners also believe their building is haunted by ghosts, and they have brought in paranormal investigators for confirmation.

“We have seen (ghosts), if you believe in them,” Poston says, adding that a medium butted heads with one.

Poston says this area once was part of Cowan’s Row and used to be a hotel, which might have been the scene for a couple of murders. None of this has been verified.

Developers have looked at the building as a possible place for a mix of retail and residences.

Also, when city officials were studying the potential for a downtown hotel and convention center, the Salisbury Square Antiques & Collectibles building — a solid, concrete-and-steel structure — was one of the places considered.

Looking back, Poston says his time of working in downtown Salisbury adds up to 28 years, when you count the seven years he worked with Leonard’s Jewelers before selling cars.

It has been a love-hate relationship at times.

“Salisbury is one of the best worst places to do business,” Poston says.

Since a bad automobile accident, Poston has gone through seven surgeries in five years, but he reports he’s doing much better.

The men look forward to retirement — John has a getaway house in the mountains, and Von also would like one at the beach —  but they will miss all the other downtown merchants, their vendors and customers.

“Another thing I will miss will be doing the windows,” Shuler says.

Shuler has had a ready answer when people ask what he’ll be doing in retirement.

“I have a good comeback,” he says. “I’m going to pretend I’m Clyde and go into every store and tell them what they should be doing.”