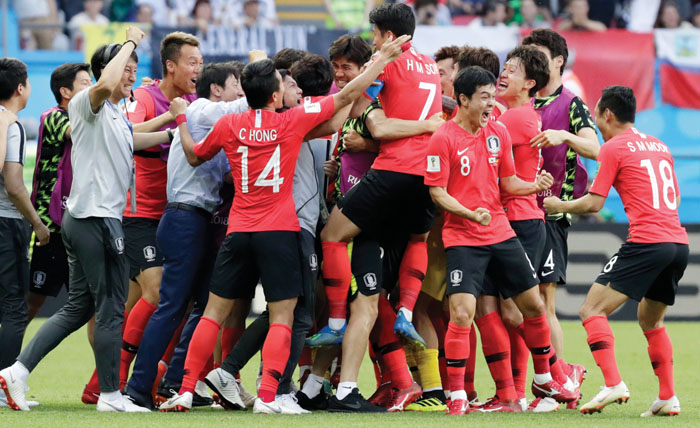 South Korea's players celebrate a goal during the group F match between South Korea and Germany, at the 2018 soccer World Cup in the Kazan Arena in Kazan, Russia, Wednesday, June 27, 2018. (AP Photo/Lee Jin-man)

KAZAN, Russia (AP) — Everyone was waiting for Germany to score another late World Cup-saving goal.

Instead, the Germans have become the fourth defending champions in the last five tournaments to be eliminated in the group stage following a 2-0 loss to South Korea on Wednesday.

The four-time champions allowed a pair of injury-time goals while knowing a 1-0 victory would have been enough to advance because of the result in the other group match.

“It’s very, very hard to put it into words,” said Germany defender Mats Hummels, a member of the team that won in Brazil four years ago. “We believed until the end today. Even when it was 0-1, I think we kept trying to turn it all around.”

Germany ended up last in Group F while Sweden and Mexico advanced to the round of 16. South Korea was also eliminated despite the victory.

It was the first time Germany has been knocked out in the first round since 1938, though the team was not allowed to enter the 1950 tournament.

Even in Yekaterinburg, nearly 500 miles away, the Mexican fans expected Germany to score. They were still in position to advance despite trailing Sweden, but they were waiting — some with tears in their eyes — for Germany to do the inevitable and ruin their chances of moving on.

That’s when South Korea stepped up.

Kim Young-gwon scored the first goal in the third minute of injury time, a goal that sent the Koreans cheering in Kazan and the Mexicans delirious in Yekaterinburg. Originally called out for offside, the goal was given after video review.

Son Heung-min made it 2-0 in the sixth minute of stoppage time after Neuer came up the field to help his teammates outside the South Korea box. Son tapped the ball into an empty net after a long pass from Ju Se-jong.

Besides Germany this year, France in 2002, Italy in 2010 and Spain in 2014 were the previous defending champions to get eliminated in the group stage.

“We deserved to be eliminated,” Germany coach Joachim Loew said. “For us, this is a huge disappointment. But we have young players who are talented and have the potential to go forward. It happened to other nations before. We need to draw the right conclusions.”

All four teams in the group had a chance to advance in games that were being played simultaneously, but Sweden’s 3-0 lead over Mexico put Germany in prime position to move on as well — if the Germans could score against the South Koreans.

That was the problem, for Germany.

Loew had changed his line-up to mix youth with experience, calling back Hummels, Sami Khedira and Mesut Ozil while also fielding Niklas Suele and new Bayern signing Leon Goretzka. Suele made his first World Cup appearance as a replacement for Jerome Boateng.

Germany made a nervous start, playing slower than it usually does to avoid being vulnerable on the break. But the strategy did not bring much success in the first half.

The Germans kept peppering the South Korea box with harmless crosses and it was their opponents that came close to scoring from a set piece in the 19th minute after Neuer failed to control a 25-meter free kick from Jung Woo-young. The Germany keeper bobbled the ball and needed to swipe the rebound away from the attackers after a spectacular dive.

The Germans continued at the same pedestrian pace after halftime and Ozil had another poor display, with many of his passes uncompleted.

Loew brought on substitutes Mario Gomez and Thomas Mueller on either side of the 60-minute mark but his players kept giving the ball away, with most of their attacking combinations lacking precision and speed.

Gomez had a decent header stopped by goalkeeper Jo Hyeon-woo in the 68th minute and could not properly connect with a low cross from Joshua Kimmich in the 72nd as Germany’s hopes vanished.

“We did not deserve to be winning the title once again,” Loew said.

Germany ended up last in a group it expected to win. But the team never really seemed to recover from its opening 1-0 loss to Mexico.

South Korea lost its opening two matches but still entered the game with a chance to advance. It did its part by beating Germany, but Sweden’s 3-0 victory over Mexico allowed the Swedes to win the group ahead of the second-place Mexicans.

Germany had made it to the quarterfinals at the past nine World Cups, and reached at least to the semifinals at every tournament since 2002.

Loew, who guided Germany to the title at the 2014 World Cup after a routing host Brazil 7-1 in the semifinals, said it was too early to talk about his future with the national team.

“We need a couple of hours to see things clearly,” Loew said. “The disappointment is deep inside me.”

YEKATERINBURG, Russia (AP) — Sweden was so dominant against Mexico at the World Cup that the best Mexican plays of the night were made 600 miles away by South Koreans.

The Swedes rolled to a 3-0 rout Wednesday, never challenged in the second half, overtaking Mexico to win Group F just four nights after a gut-wrenching last-minute loss to Germany. The result, combined with South Korea’s 2-0 upset of the Germans, meant Sweden and Mexico — the group runner-up — advanced.

Sweden makes its first appearance in the knockout stage since 2006. Mexico plays in the round of 16 for the seventh straight World Cup, with its fans desperate for its first quarterfinal appearance in 32 years — the elusive “quinto partido,” or fifth game.

Sweden didn’t want to focus on getting revenge by helping eliminate Germany, which got some favorable calls in a tense 2-1 victory over the Swedes on Saturday night.

“We grew another little bit,” Sweden coach Janne Andersson said. “I am not going to sit here and gloat having won a match or boast about a win. We don’t want to stir things up too much.”

Mexico’s Edson Alvarez had an own goal in the 74th minute to put the game out of reach at 3-0.

It capped an emotional week for the Blue-Yellow. The team made a unified statement Sunday defending teammate Jimmy Durmaz from criticism and racist attacks after his late foul led to a free kick that won the game for Germany.

“A few days ago we lost in the last minute and we were very disappointed, and now we come back and beat Mexico,” Augustinsson said. “I think we deserved to win the group, and Mexico deserved to be second.”

As Sweden’s lead grew, Mexican fans paid more attention to the other game, rooting against Germany, which could have passed Mexico with a victory depending on tiebreakers.

El Tri’s faithful could be seen frantically checking their phones for scoring updates from Germany’s game soon after Sweden’s second goal. After South Korea’s first goal, they let up a loud cheer and tossed drinks in the air as their chances of advancing improved.

Great organization and some fortunate timing played out in the second half for Sweden. Augustinsson scored when the ball luckily landed in his path following a mistimed shot from Viktor Claesson popped up to his teammate.

After Granqvist’s penalty kick, Sweden took total control. Alvarez’s own goal occurred when he was trying to prevent Ola Toivonen from connecting with the ball, deflecting it with his arm past Ochoa.

“We just need to move on,” Ochoa said. “This is the World Cup. We can’t pull it out of our pocket, it’s not going to be easy and I think it’s a good lesson for what’s to come.”

Said coach Juan Carlos Osorio: “We have to say we qualified because we beat Germany and Korea. However and nevertheless, I am very hurt.”

Alvarez’s own goal was the seventh overall of the World Cup, one more than the previous record in 1998.

Mexico’s Jesus Gallardo was called for a yellow card just 13 seconds in — believed to be the fastest in World Cup history — setting up the first of two quick set-piece opportunities Sweden could not take advantage of.

Sweden wins Group F and will face Switzerland in St. Petersburg on Tuesday.

As the runner-up, Mexico meets Brazil on Monday in Samara.

Sweden didn’t panic despite missing early chances to score. The Swedes stayed crisp in their exchanges and it helped them find seams in El Tri’s defense.

Mexico will lament its missed chances early. Its aggressive style did open up some counterstrike chances for Sweden.

Defender Hector Moreno got his second yellow card of the tournament and misses Mexico’s next game. Sweden’s Sebastian Larsson, who was carted off in the second half with head injury, also received a second yellow and will also be suspended.