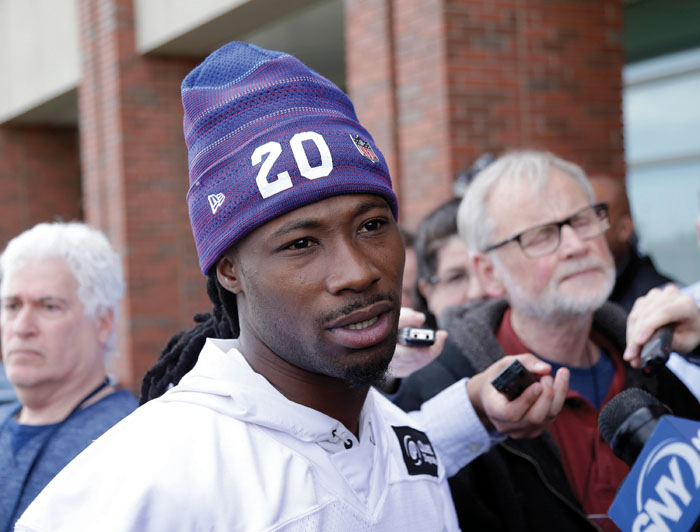 FAIR LAWN, N.J. (AP) — The brother of New York Giants cornerback Janoris Jenkins was arrested and charged Wednesday with manslaughter in the death of a 25-year-man whose body was found in the NFL player’s New Jersey home.

The Bergen County prosecutor’s office said Wednesday 34-year-old William H. Jenkins, of Fair Lawn, was charged with aggravated manslaughter in the death of Roosevelt Rene, whose body was discovered Tuesday.

Acting Prosecutor Dennis Calo said William Jenkins is in custody in the Ontario County Jail in New York state. The investigation is ongoing.

Janoris Jenkins’ home is about 10 miles (16 kilometers) north of MetLife Stadium. Property records show Janoris Jenkins has lived at the house the last two years, and on Wednesday the Bergen County prosecutor’s office listed William Jenkins as living at the same address.

According to New York state department of corrections records, William Jenkins was arrested on drug charges in 2006 and again in 2011. He was paroled from prison in July 2016.

Janoris Jenkins is entering his third season with the Giants. The 29-year-old signed a five-year, $62.5 million contract with the team in 2016 and had an outstanding first season when he was selected to be a starter in the 2017 Pro Bowl.

His second season did not go as well. The veteran was suspended for a game for violating team rules in late October and eventually had his season end in late November by an ankle injury that required surgery.

He has intercepted 16 passes in six seasons and scored nine touchdowns.

Jenkins played at Florida from 2008-10 before finishing his college career at North Alabama. He was drafted in the second round by the St. Louis Rams in 2012. He played four seasons with the Rams.

WIFE OF DENVER BRONCOS OWNER SAYS SHE ALSO HAS ALZHEIMER’S

DENVER (AP) — The wife of Denver Broncos owner Pat Bowlen says she has Alzheimer’s, a disease which led her husband to give up control of the team four years ago.

In an announcement Wednesday, Annabel Bowlen said she wanted to make her diagnosis public right away to help raise awareness about others dealing with the disease.

“I feel that it is important for people to know that those in my situation do not need to completely withdraw from their daily activities,” Annabel Bowlen said in a statement released through the team. “Based on my own experience with Pat, there will still be many joyous and rewarding moments for me as well as my family and friends.

“I intend to proceed in life with the same strength, courage and endurance that Pat has shown in his battle with this disease. Like Pat, I know there will be good days and bad days ahead.”

Her five children said in a statement that they have been inspired by the strength and courage she has shown while supporting their father. The statement says they’re confident she will bring “the same grace, compassion and determination to her fight.”

The team was placed in a trust when Pat Bowlen stepped down in 2014 because of Alzheimer’s. The trust is overseen by three people, including team president and CEO Joe Ellis.

Steratore retired this offseason after leading the officiating crew at the Super Bowl in Minneapolis. He says that after 15 years of officiating in the NFL, “it’s time to hang up my whistle for a new challenge.”

CBS Sports announced Tuesday that Steratore would provide analysis in New York on Sundays throughout the NFL season. He will join announcers in the booth for its Thanksgiving and NFL playoff coverage, including the Super Bowl, which is in Atlanta next year.

Says Sean McManus, chairman of CBS Sports, “His strong communication skills combined with his knowledge of the rules will allow him to quickly interpret and explain the calls, giving viewers a better understanding of the rules and enhancing our overall coverage.”

NFL PLAYERS TRADE HELMETS FOR CAPS AND GOWNS IN OFFSEASON

ALAMEDA, Calif. (AP) — When Bruce Irvin got a multimillion dollar signing bonus after being a first-round draft pick in 2012, the idea of getting his college degree was the last thing on his mind.

A former high school dropout who spent time in jail and dealing drugs while growing up in Atlanta, Irvin later decided to set an example for his 5-year-old son Brayden and show that he is more than just a professional athlete.

From the troublesome childhood that he detailed last year in a Player’s Tribune article titled “The Things I’ve Done ,” Irvin has developed into a leader on the Raiders and in the community, earning a nomination for the Walter Payton Man of the Year Award.

He will have made more than $36 million playing football at the end of this season, winning one Super Bowl with Seattle and earning plenty of other accolades. But walking on stage to get his degree back in May goes right near the top of his accomplishments.

“The odds were stacked up against me to get my bachelor’s degree. It was a surreal moment,” he said. “I kind of put it up there with the Super Bowl, neck and neck. Super Bowl probably would have been better if we’d won two in a row. It was a great moment, not only for me but for my son and my family. I’m glad I got to experience it.”

Irvin was one of several NFL players who earned college degrees this offseason, taking advantage of a program negotiated in the collective bargaining agreement that provides tuition reimbursement for players seeking to continue their education.

Players can earn up to $60,000 in tuition reimbursement based on their time in the league. Arthur McAfee, the senior vice president of NFL Player Engagement, said about two dozen players each year earn their degrees through the program. He added that the increased time off under the current collective bargaining agreement has made the process easier for players interested in getting their degrees.

The most high-profile case this offseason was Kansas City Chiefs guard Laurent Duvernay-Tardif, who became the first active NFL player to get his medical degree when he earned his from McGill University in Montreal just over a year after signing a $41.25 million, five-year contract.

“When I got drafted in 2014 it was a promise that I made to myself that I was going to keep grinding and keep pushing to combine my two passions at the highest level and show people it was possible,” Duvernay-Tardif said.

Duvernay-Tardif, a sixth-round pick in 2014, did most of his graduate work in the offseason, taking advantage of the increased time off for players provided in the current CBA.

Duvernay-Tardif did take one orthopedic exam during a bye week in 2015, spending a flight back from London studying while his teammates celebrated. While some teams were wary of his desire to become a doctor, Duvernay-Tardif said Chiefs coach Andy Reid has always been extremely supportive.

“Coach Reid it was the total opposite. It was like ‘If you’re here and you still have medicine as a plan B it’s because you really love to play football and I’m going to help you to the best of my ability,’” Duvernay-Tardif said. “That’s what he’s been doing for the past four years. Every season at the end of the season during our exit meeting he’s been asking me ‘what’s next for you doc?’ and we’ve been talking about different clinical rotations and stuff. And his mother actually went to McGill University and was one of the first women to graduate in medicine, so there was a little bit of a connection and I really think that he helped me through the process. I don’t think it would have been possible if it was not for him.”

The Raiders have also been extremely supportive of players pursuing their degrees in the offseason and got to watch four players don their caps and gowns over two weekends this offseason. Star receiver Amari Cooper (Alabama), starting right guard Gabe Jackson (Mississippi State) and backup tackle Jylan Ware (Alabama State) all graduated this offseason thanks to the tuition assistance and guidance from the team.

Annelie Schmittel, who works on the Raiders player engagement staff, has been heavily involved in helping the players do what they need to graduate and even went to West Virginia for Irvin’s ceremony earlier this offseason. She hopes the recent graduates serve as role models for young players just entering the league.

“That’s something no one can take away from them,” Schmittel said. “It’s great having guys like Amari, Bruce, Gabe, starters on this team, veterans who have played in this league a long time and don’t really need a degree but wanted to go back and finish what they started. That’s incredible to see and for us to see because we’re seeing the hard work that they put in. … It’s a really proud moment. We’re really involved in it because it’s such a huge accomplishment for us.”

Several other players also have gotten their degrees this offseason, including Jets linebacker Jordan Jenkins, who got a business administration degree from Georgia, and Titans running back Derrick Henry, who graduated from Alabama.

Henry’s degree kept a promise he made to his late grandmother, who he honored in an article for the Player’s Tribune .

“Graduating is something that I’ve wanted to do for myself, but also, for you,” he wrote. “I always wanted you to be proud of me, and I know that you are.”