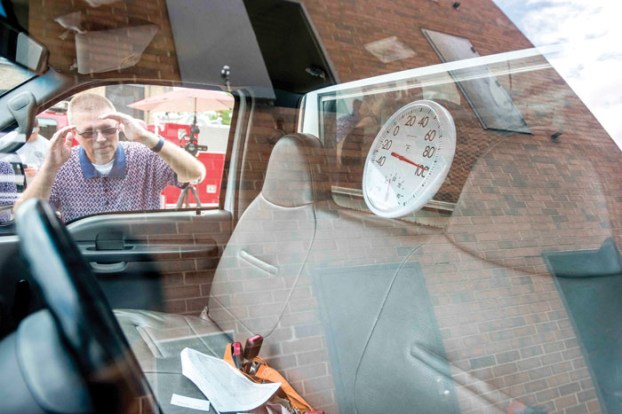 Rowan County Weather's Steve Monday checks a thermometer placed in a Salisbury Fire Department service truck with the windows up. The temperature inside peaked at 98 degrees after 35 minutes. Jon C. Lakey/Salisbury Post

Weather Wednesday: Leaving a child in a vehicle in hot weather can lead to tragedy

It’s an unfortunate story that you hear every summer. A parent leaves a child in the car unattended with the engine off and the windows rolled up.

On average, 37 children die in hot cars each year in the United States.

When a parent or caregiver leaves a baby or young child in a car, the end result can be injury or even death.

I wanted to be able to deliver a message that may save a child’s life. This week, Rowan County Weather, The Salisbury Post, and the Salisbury Fire Department conducted a test to see how hot the internal temperature of a vehicle gets on a summer day.

The weather conditions throughout the test were overcast skies with a constant 81-degree temperature.

The results inside the vehicle were changing dramatically. Within the first 10 minutes, the inside of the vehicle had warmed to 95 degrees.

“The internal temperature of the car can heat up to 80 percent of its maximum temperature within 20 minutes,” said Lt. Brantley Shanks of the Salisbury Fire Department.

After the 20-minute mark, the interior of the vehicle had warmed to 98 degrees.

When asked about what a deadly temperature inside a vehicle would be, Shanks said, “A core temperature of 105 degrees would be a temperature that could be fatal.”

According to livescience.com, it’s difficult to predict when heatstroke will strike, largely because the condition involves many factors. These include a person’s age, weight and health conditions, the researchers said.

However, most cases happen when a child’s core body temperature rises above 104 degrees for an extended period of time.

As we concluded our test after 40 minutes, the vehicle’s internal temperature had maxed out at 98 degrees.

Now don’t let that give you a safe feeling. Had the sun briefly popped out during our test, the internal temperature of the vehicle would have certainly crossed the 105 degree deadly temperature.

According to the National Weather Service, a vehicle parked in direct sunlight will reach an estimated 123 degrees internally within 60 minutes.

There are various phone apps available for download such as Waze you can install on your phone. Waze gives a reminder to get your child out of the car once you reach your destination.

There are other apps you can download as well, such as Precious Cargo and Kars4Kids.

The reminders these apps can offer are invaluable.

In closing, I want to thank the Salisbury Fire Department, Chief Jay Baker and Lt. Shanks for assisting in this test that may provide information to save a child’s life.

SPENCER — The Spencer Board of Aldermen got a preview of a proposed municipal complex June 13. On Monday, Keith... read more