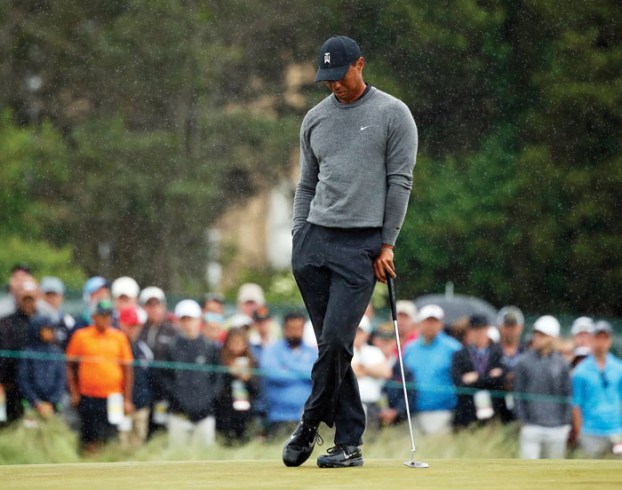 FILE - In this Friday, June 15, 2018 file photo, Tiger Woods waits to putt on the 15th green during the second round of the U.S. Open Golf Championship in Southampton, N.Y. Woods is playing a regular schedule, but still not winning six months into the year. (AP Photo/Carolyn Kaster, File)

Still no dominant player, halfway through the year

Golf still looking for a favorite 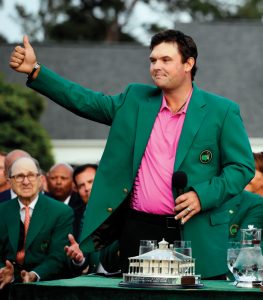 FILE – In this Sunday, April 8, 2018 file photo, Patrick Reed gives a thumbs up after being presented with the championship trophy after winning the Masters golf tournament in Augusta, Ga. Reed should be considered a front-runner for golf’s best player through six months of the year. (AP Photo/Chris Carlson, File)

Some might consider that a surprise considering where he was a year ago.

Woods has finished within five shots of the lead only once, a runner-up finish in the Valspar Championship, and he was never in the picture at either of the two majors.

Some might consider that a surprise considering how well he is swinging the club.

Six months into 2018, golf hasn’t offered a lot of clarity with Woods, or anyone else.

Golf keeps trending younger, with few exceptions, a point driven home two weeks ago at the U.S. Open when 28-year-old Brooks Koepka made it five straight majors won by players in their 20s. Dustin Johnson is still No. 1 in the world, a ranking he has held for all but four weeks.

But there still isn’t a dominant figure, except when it comes to attracting a crowd.

Woods is at the Quicken Loans National this week, a field so weak that Rickie Fowler (No. 8) is the only player from the top 10 in the world, and no one from the top 15 in the FedEx Cup is playing. There’s still plenty of energy along the Potomac River, mainly because of the No. 82 player in the world — Woods.

With two majors, the FedEx Cup, the Ryder Cup and the Race to Dubai still to come, here’s how golf is shaping up so far:

Given the significance of majors, Masters champion Patrick Reed gets the nod going into the second half of the year.

Reed and Koepka each have only one victory — the best kind — and while Koepka didn’t really start his year until two months ago, Reed had a share of the lead during the final round of the U.S. Open and looked certain to get into a playoff at the Valspar Championship until he had a putt roll back to his feet on the 18th green.

Johnson, meanwhile, is No. 1 for a reason. Even with two victories, his year is shaping up as what might have been. He shared the 54-hole lead at the AT&T Pebble Beach Pro-Am and the U.S. Open. Going back to the PGA Tour season that began in October, he lost a six-shot lead in the HSBC Champions.

Bubba Watson has as many victories in the last four months as the previous three years combined.

Watson has recovered from a health issue (he won’t say what it was) that caused him to lose 20 pounds, and he abandoned the Volvik colored golf balls he used last year. The result is another victory at Riviera, another victory at Hartford and another World Golf Championship at the Dell Match Play.

Watson lobbied to be an assistant captain at the last Ryder Cup. He now is No. 5 in the Ryder Cup standings. He was at No. 117 in the world going into Riviera. Now he’s up to No. 13.

Among the top players, Rory McIlroy and Jason Day appear to be on the cusp of at least having a chance to get back to No. 1 in the world.

McIlroy dropped out of the top 10 until winning with a big charge at Bay Hill, his first victory since September 2016. His momentum stalled when he closed with a 74 at the Masters while playing in the final group, lost a weekend lead at Wentworth and missed the cut at the U.S. Open.

Day had gone nearly two years without winning until his playoff victory at Torrey Pines, followed by another victory at the Wells Fargo Championship. That at least got him back into the top 10, though he still has a long road to get back to the top.

Jordan Spieth had a mathematical chance to get back to No. 1 in the world at the U.S. Open, which suggests his year isn’t all that bad.

It’s not because Spieth hasn’t won since the British Open last summer. It’s because he has given himself so few chances. The only time he was in the serious contention this year was the Masters, where he made bogey on the 18th hole and still shot 64 to finish two shots behind Reed.

In his seven starts since the Masters, Spieth has finished 12 shots or more out of the lead, except for the three times he missed the cut.

Ted Potter Jr. had missed 46 cuts in 103 starts since his last victory and was No. 246 in the world. And then he went head-to-head with Johnson at Pebble Beach and beat the No. 1 player in the world. Since then, Potter has missed the cut in seven of his 12 events and only once finished in the top 25.

Justin Thomas nearly holed a wedge on the 18th hole to force a playoff at the Honda Classic, and he won with a 5-wood over the water to set up a two-putt birdie. He was even better one week later in Mexico City, where he holed a wedge on the final hole for eagle that got him into a playoff. This one didn’t turn out so well, as Thomas made bogey in the playoff and lost to Phil Mickelson.