Order up: Students learn ins and outs of cooking 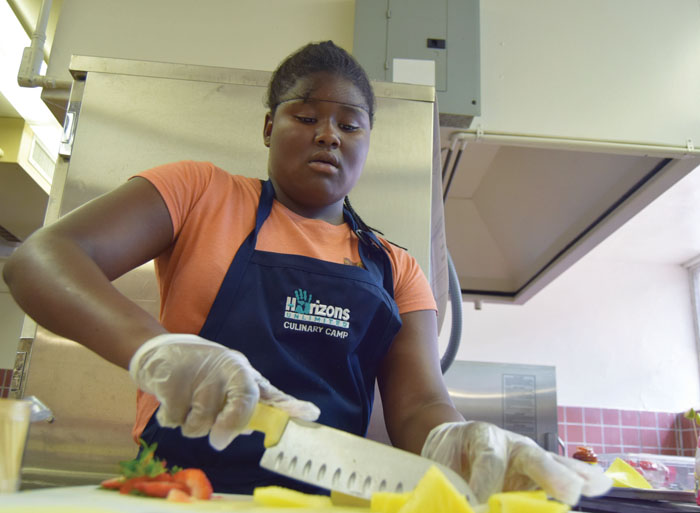 SALISBURY — A lucky group of Rowan County students spent last week learning how to slice and dice alongside industry professionals.

The camp is an offshoot of a STEM project the science center held last summer. During a STEM Scholars program, students purchased food from Patterson Farms and used it to make salsa — and it was a huge hit.

The culinary camp was open to middle and high schoolers and taught the basics of cooking, knife skills and sanitation. Students even studied for and took the ServSafe test, a food-safety certification of the National Restaurant Association.

“Normally in a CTE class, they would study this over a whole semester,” Pifer said. “They did it in three days.”

While students won’t get their results for two to three weeks, Pifer is “confident they passed.”

“We’ve had a blast this week, and they’ve studied hard,” he said.

The camp partnered with Rowan-Salisbury Schools Food Services for use of space, lessons and teachers. Several of the district’s chefs and food service workers trooped out to the camp’s home base at Henderson Independent High School to show off their skills.

Students also had the opportunity to watch Salisbury celebrity Chef Santos in action.

The group also spent some time doing a mock inspection of one of the system’s cafeterias. Most of the group said the skills they learned are invaluable.

“I like the chopping that we got to do,” Bell said.

For other students, the skills were more basic — but no less appreciated.

“Before I came, I didn’t know anything about cooking,” Kailee Keller said. “The only thing I could make was macaroni and cheese.”

Last Thursday, Keller expertly spread salsa, cheese and other goodies on mini taco bites and handled the cleanup with ease. It wasn’t Keller’s decision to join the culinary camp, but she’s glad she did.

“At first, it was something my mom wanted me to do to get me out of the house,” she said.

She quickly adapted to the friendly attitude of fellow campers, made some friends and rose to the challenge. She loved learning cooking techniques and how a kitchen operates and participating in cooking competitions with other campers — something she wasn’t alone in.

Nyasia Pittman also enjoyed the competition. While Pittman cooks at home, there was still plenty for her to learn.

“We learned how to cook and steps I never learned,” she said. “I might come back next year for more.”

“It’s a really good thing to do,” she said. “If you like to cook, this will help you learn.”

It also provided a boost in confidence for some students.

“It makes you feel like you can do something,” Middleton said.