College football player had brain damage at time of suicide 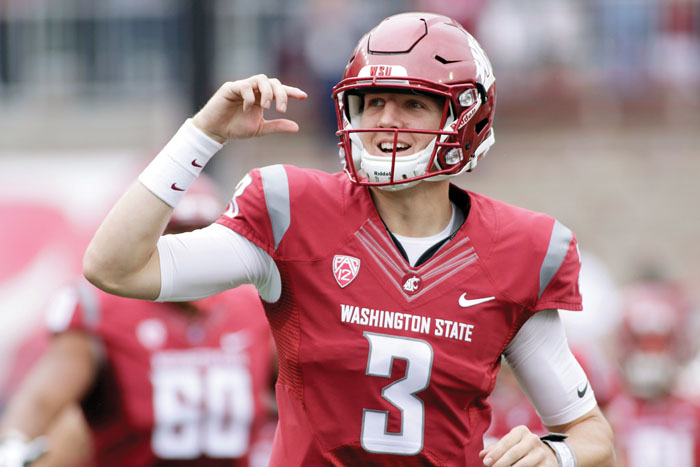 FILE - In this Sept. 17, 2016, file photo, Washington State quarterback Tyler Hilinski (3) runs onto the field with his teammates before an NCAA college football game against Idaho, in Pullman, Wash. The family of the Washington State University football player who died of suicide in January said the 21-year-old quarterback had extensive brain damage that's been linked to concussions from playing the sport. Tyler Hilinski was found dead in his apartment with a gunshot wound and a suicide note on Jan. 16. Mark and Kym Hilinski told NBC's "Today" show on Tuesday, June 26, 2018, that the Mayo Clinic did an autopsy of their son's brain.(AP Photo/Young Kwak, File)

PULLMAN, Wash. (AP) — The family of the Washington State football player who died of suicide in January said the 21-year-old quarterback had extensive brain damage that’s been linked to concussions from playing the sport.

Tyler Hilinski was found dead in his apartment with a gunshot wound and a suicide note on Jan. 16.

Mark and Kym Hilinski told NBC’s “Today” show on Tuesday that the Mayo Clinic requested to do an autopsy of their son’s brain. The interview comes alongside the debut of a new Sports Illustrated documentary about the family’s search for answers.

The family in those interviews said the autopsy results indicated that their son had signs of extensive brain damage known as chronic traumatic encephalopathy, or CTE, which has been found in hundreds of former NFL players.

The sophomore quarterback was last seen alive the same day, when he dropped a teammate off on campus for morning class. Police said the rifle belonged to a teammate and that Hilinski took it without the teammate’s knowledge on or before Jan. 12.

Kym Hilinski said they were shocked and numb after finding out that he had shot himself. She said he’d never shot a gun until the day before he died.

There were no verbal signs that the young football player was suffering. His mother said he was quiet, reserved but always happy.

“Did football kill Tyler?…I don’t think so. Did he get CTE from football? Probably. Was that the only thing that attributed to his death? I don’t know,” Kym Hilinski said in the documentary.

The family’s other son also appeared in the documentary. Ryan Hilinski was noted as a star quarterback at his high school in California and is set to play at the University of South Carolina with the support of his parents.

Ryan Hilinski said his brother’s brain damage diagnosis scared him and made him worried he may suffer what his brother went through, but that he’s still committed to playing football.

“I think Tyler would want me to do the same thing. I don’t think he’d want me to stop,” Ryan Hilinski said.

Tyler Hilinski appeared in eight games during his sophomore season, throwing for 1,176 yards and seven touchdowns. His most memorable outing came in the second week of the season, when he led Washington State from a 21-point deficit in the fourth quarter to beat Boise State 47-44 in triple overtime. Hilinski threw for 240 yards and three touchdowns coming off the bench and was carried off the field after the victory.

His only start came in the Holiday Bowl against Michigan State, although he played extensively in a loss to Arizona. He was expected to be the starting quarterback this coming fall during his junior year.

The family has started the Hilinski’s Hope Foundation to raise awareness about mental health wellness for student-athletes.