Prep Basketball: Causby to take the reins at North Rowan 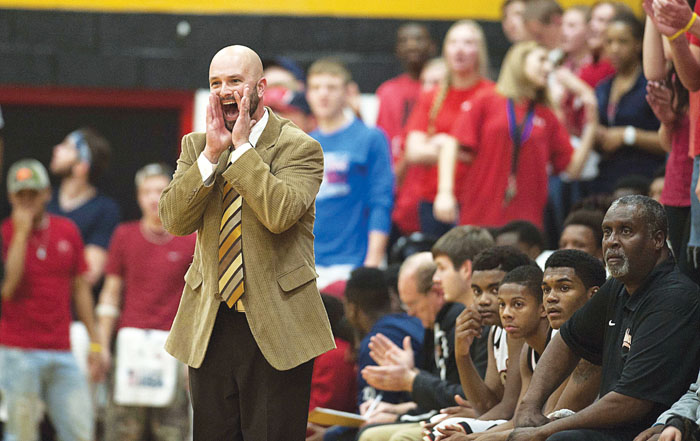 SPENCER — The last boys basketball game Jason Causby coached at Salisbury High was a playoff loss to North Rowan in 2015.

Now Causby has been hired by North, Salisbury’s biggest rival.

While this sounds weird on the surface — sort of like a former Duke coach taking the reins of the Tar Heels — it makes a lot of sense for all parties involved.

Causby is a Rowan County guy who knows Rowan kids. He’s a proven coach who has won huge games — and dropped tough games — with equal class.  He’s been good in the classroom as a special education teacher for 18 years. He’s good in the hallways, good in a lot of different ways.

“Jason’s coaching record is definitely stellar,” North Rowan athletic director Ben Hampton said. “His teams have won a lot of basketball games, but we’re really excited to have him because he’s a guy who builds character. This is a big hire for us.”

Causby, 42, should be in his peak coaching years, that part of a coach’s life where there’s both plenty of experience and plenty of energy. This could be his last stop. He might be North’s coach for the next 10 years, and it’s reasonable to expect that given the quality of athletes that North usually has, he could win championships.

“I think we all get into coaching with aspirations of coaching Division I college basketball,” Causby said. “I’ve experienced a little bit of success, but I know who I am now. If you’re in this for the right reasons, that point in time comes when you realize that coaching is about helping the kids, and it means even more to be able to help the kids in my own community. That’s why I jumped at this opportunity when it popped up.”

North’s 2017-18 campaign was unusual, to say the least. Martin Unger coached the first 16 games, and the Cavaliers were 9-7 when he resigned. Assistant Bill Kesler piloted North the rest of the season and was 9-2. Cumulatively, North was 18-9, went 11-3 in the 1A Yadkin Valley Conference, and finished strong. North Rowan beat good teams from Albemarle and North Stanly to win the YYC tourney and won again in the first round of the state playoffs.

“Our program and our kids went through some adversity last year that you don’t expect to have to face,” Hampton said. “But we’ve got tough kids. They got through it, and they did well. They won the conference tournament.”

Causby graduated from West Rowan and Catawba College and entered the coaching ranks at the helm of the Concord jayvees.

He was still in his 20s when he was hired to coach the Salisbury Hornets prior to the 2004-05 season.

He coached Salisbury High for six seasons before moving over to Salisbury’s North Hills Christian School for the 2010-11 campaign. Then he returned to Salisbury for four more seasons.

In those 10 years of guiding the Hornets, Causby’s teams were 157-111. Most of those years, but not every year, he had some horses. The Hornets collected 11 trophies on his watch — three 2A Central Carolina Conference regular season titles, five CCC tournament championships and three Sam Moir Christmas tourney crowns.  Those three Christmas titles in Catawba’s Goodman Gym came consecutively in 2007, 2008 and 2009.

When it comes to boys basketball coaching wins in Rowan County, Causby is in the top 10 all-time. He was out of high school basketball for a few years, coached some at Pfeiffer University and even coached some girls tennis at East Rowan.

The hunger to coach hoops returned a year ago, and Causby applied and was hired to lead Mallard Creek’s boys program. It was a daunting rebuilding job. Causby said there were just two returning players in the program. Charlotte basketball is as rugged as any public school ball in the state, so it was a difficult challenge. Mallard Creek got off to an 0-9 start before bouncing back somewhat to finish 7-17. Causby has no regrets about that year. He learned a lot.

“It was a tremendous challenge, going against not only some of the most talented players, but some of the best high school coaches in the state,” Causby said. “I enjoyed the kids, enjoyed the level of competition, and we made a lot of progress as far as rebuilding he program.”

But now Causby returns to his home county. There are a lot of advantages to his new job. His drive time to Mallard Creek was 40 minutes each way. He can drive to North Rowan in 15 minutes.

“That’s like adding an hour a day to my life,” Causby said. “That’s big as far as being able to spend more time with my wife and three kids. They’ve been incredibly supportive through all my coaching moves.”

He acknowledges that he’s been dealt a strong hand for his first season at North. While it’s a 1A school, the Cavaliers probably have the county’s strongest rising senior basketball class. Forwards Brevin Goodlett and Dayjuwon Cooke, offensive-rebounding forces, were second team all-county as juniors, while rangy, clever point guard Derrick Page joined them on the All-YVC team and was honorable mention all-county. That’s one heck of a core group. A number of other experienced players return, including Chaz McCombs, a potentially dominant big guy at the 1A level.

“Goodlett, Cooke and Page remind me a lot of the Salisbury trio I was fortunate enough to coach with Darien Rankin, Romar Morris and John Knox,” Causby said. “Top to bottom, this is as good a group of kids as I’ve ever had a chance to coach. Their talent level is high and their basketball I.Q. is high. They’re personable. They look you in the eye when they speak and they want to do the right thing and they want to play basketball  for each other and they want to play the game the right way. I’m not going to try to re-invent the wheel here. My job is to help these seniors go out with a great season, doing some big things.”

Causby’s 2008-09 Salisbury team won 28 straight games, losing only the first game of the season and the last one. So when he says a group is as talented as any he’s had, that’s saying something.

He’s pumped up about this team and excited about being in a 1A environment.

“At Mallard Creek’s there were 2,600 kids, four lunch periods, all with 600-plus kids,” Causby said. “It’s going to be easier at North to find my guys and eat lunch with my guys or just to say hello to the guys in the hallways. For me, coaching is about building relationships with the players. That’s more easily done in a smaller setting.”

Hampton is glad to have Causby on board. Hoops is something Hampton shouldn’t have to worry about for a while. Causby will install his system and choose his staff.

“I know how hard it is to get a head coaching job, so I’m humbled,” Causby said. “This is an unbelievable opportunity.”