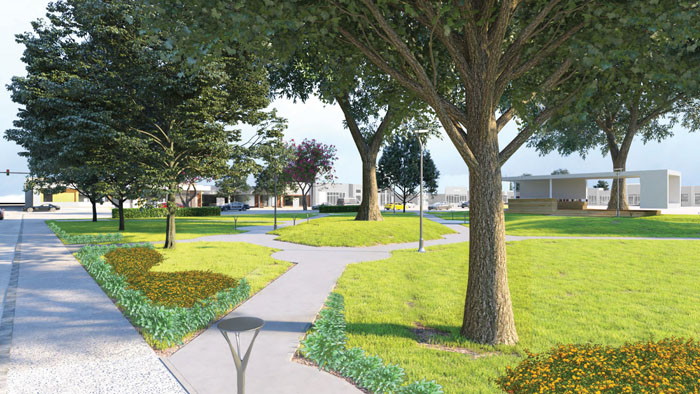 Studio Wales Architecture —  An architect’s visualization shows the design for municipal offices and a park at Park Plaza in Spencer.

SPENCER — The Spencer Board of Aldermen got a preview of a proposed municipal complex June 13.

The plan would renovate and upfit Park Plaza shopping center for municipal offices.

The roughly 20,000-square-foot complex would be a solution to two problems for Spencer — the need for a new town hall, and what to do about the empty shopping center. The complex would provide more space for town offices with room to grow and would repurpose half to a third of Park Plaza.

When the space is finished, town offices would occupy only about 8,000 square feet. The rest would be available for lease.

The town board has already entered into a purchase agreement with the property owners, and the project has moved into the design phase.

But any designs need to be approved by the Historic Preservation Commission, and the proposed facade would be more modern than neighboring buildings. But Wales said that doesn’t mean it doesn’t fit in.

The complex’s design — and that of a proposed park also on the property — were drawn from town history and from the N.C. Transportation Museum, which is right across the road. Columns, window styles, and even room design echo the old repair shop’s architecture.

“The previous town manager said, ‘Use the Transportation Museum as your inspiration, as your palette,’ so we did,” Wales said.

Much of Wales’ presentation reviewed designs for the property’s future park, which will occupy space near South Salisbury Avenue. The green space would in many ways be the heart of the project. 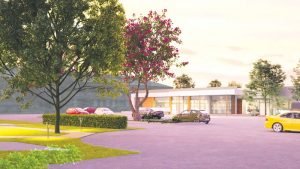 Studio Wales Architecture
An architect’s visualization shows the design for municipal offices and a park at Park Plaza in Spencer.

The park will preserve an old tree in the area and have trees to provide lots of shade. It is designed with corralling students and children in mind.

The design for walking paths in the park was inspired by subway systems and the national layout of the Norfolk-Southern Railway system, with Spencer at its heart. The park also will feature a pavilion inspired by the design of train engines.

The presentation served as an informal session for the commission, whose members asked questions about material types, tree varieties and roofing. No votes were taken.

The commission members will bring forward their concerns, discuss alternatives and take action at a July 9 public hearing, where they will consider issuing a certificate of appropriateness. The meeting will begin at 7 p.m. in Town Hall.