Letter: Immigration doesn’t have to be divisive 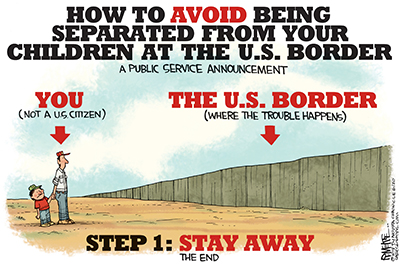 Now that the immigration debate has the face of a child stamped on it, all hell is breaking loose. For years the left has tried to paint the right as cold, cruel and heartless. Thanks to los niños coming from south of the border, they have their chance. Who can be against children, right?

I guess the only way for parents and their children to remain together is for no law to be in place for the parents to break in the first place. An open-border policy would accomplish that.

Under an open-border, anybody with anyone could enter the United States any time, anywhere and anyhow. Gee, what could possibly go wrong? Doesn’t really matter, because an open border fits the “Give us your tired, your poor, your huddled masses yearning to be free” mentality. If I recall, those original “huddled masses” went through a process, kids and all.

Last week the Salisbury Post ran a cartoon depicting an immigrant father and son looking at the U.S. border wall with the heading,” How to Avoid Being Separated from Your Children at the U.S. Border.” The answer was, “Step 1: Stay Away (The End).” I believe a better answer is, Step 1: Use the front door (a start).

We need to dismount from the high horse of naive compassion we’ve been riding and get back to reality. America is not anti-immigration. Neither is President Trump. All we want is for immigrants to enter the U.S. in an orderly fashion, so we know who is entering. Why is that concept so hard to grasp?