For Lt. Col. Justin Chandler, Salisbury will always be home 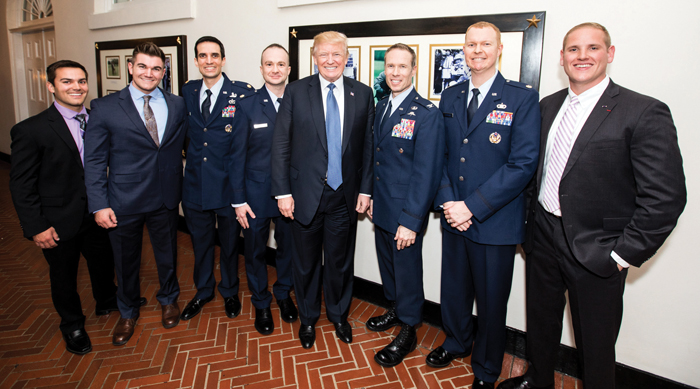 Air Force Lt. Col. Justin Chandler, formerly of Salisbury, stands at the immediate left and partially behind President Donald J. Trump during an evening in February when Chandler and other officers watched the movie '15:17 to Paris' with the president at the White House. Photo by Shealah Craighead

Talk about a surreal experience.

In February, Air Force Lt. Col. Justin Chandler found himself at the White House with a handful of other officers, watching a private screening of the Clint Eastwood movie “The 15:17 to Paris.”

President Donald Trump was there, too, sitting in the row in front of Chandler.

“You just keep looking around — making sure you’re not dreaming — and taking in the whole experience,” says Chandler, 37.

In his 15-year career since graduating from the Air Force Academy, Chandler, formerly of Salisbury, has had a meteoric and highly decorated rise through the ranks with the kinds of experiences he’ll tell his children and grandchildren about someday.

He has met three presidents so far — Bill Clinton, Barack Obama and Trump.

Flying one of the first humanitarian missions into Haiti after its earthquake in 2010, Chandler commanded the plane carrying journalist Geraldo Rivera to the horrific destruction.

Chandler has been deployed four times and altogether has logged 1,900 hours in the air, including 650 combat hours. His military decorations include the Meritorious Service Medal with two oak clusters, the Air Medal with four oak leaf clusters and the Aerial Achievement Medal.

When he was promoted to lieutenant colonel on Feb. 28, Chandler took his oath in front of the U.S. Constitution at the National Archives.

“I was fortunate that the stars aligned to make that happen,” Chandler says.

At the time, he was winding up his Pentagon assignment in Washington as an airpower strategist and a founding member of the Air Force’s “Pilot Training Next” initiative.

For the last month or so, Chandler and his family have been settling into San Antonio, Texas, where he is commander of the 99th Flying Training Squadron at Randolph Air Force Base

The 99th Squadron’s history goes back to World War II, when it formed as the first flying unit for black pilots — the Tuskegee Airmen, or “Red Tails.”

The tail tops of the T-1A Jayhawks in the 99th Squadron are painted red in honor of that history.

Chandler is in command of 17 aircraft and 36 full-time instructor pilots, who along with him will be training students on the Jayhawks.

“I’m trying to enjoy Tex-Mex (food) and barbecue but haven’t had a whole lot of time to go out and explore,” Chandler says.

After their graduation from West Rowan High School in 1999, Chandler and his best friend, David Kluttz, were the first students ever from the school to enroll at the Air Force Academy.

After 10 years of active duty in the Air Force, Kluttz became a commercial pilot for Delta in Atlanta and also a member of the Air Force Reserve. He and Chandler, who worked as teens at Office Land in Salisbury, remain close and talk frequently.

Growing up, Chandler also lived in Dayton, Ohio (seven years), and Jamestown, New York (four years), before moving with his family to Rowan County in 1993 and starting the seventh grade at West Rowan Middle School.

He became an Eagle Scout with Troop 448 in Salisbury. He captained the first swimming team at West Rowan High. He also ran cross country and golfed for the school.

“Salisbury is home and will always be home,” says Chandler, whose daughters, Emma, 7, and Charlotte, almost 2, were baptized at First Presbyterian Church.

Justin’s parents, Randy and Cathy Chandler, still live here. Cathy teaches nursing at Rowan-Cabarrus Community College, and Randy has been a key employee through the years at places such as Lane Punch Corp. and Power Curbers.

Chandler counts his parents as his most influential role models. His father has a selfless personality and instilled a strong work ethic in him, he says.

When he first came to Salisbury, Randy Chandler was plant manager at Lane Punch. He found work for his young son at the company — every dirty job other employees didn’t want to do.

“It was a good experience,” Justin says. “I definitely appreciated every cent I earned.”

Chandler also was a lifeguard at Westside Pool in Neel Estates. Later, when he and Kluttz worked at Office Land, Chandler was a stocker before moving to the technology departmen,t where he took computers apart and put them back together.

His father expected him to pay for his own gas, car insurance and half of the money for his first vehicle. Both his parents also showed him the importance of volunteering and caring for others, Chandler says.

“When my time is over, if I have left the world a slightly better place,” he says, “I’ll consider that a successful life.”

Chandler married the former Marguerite “Margo” Janosko of Oklahoma on Aug. 8, 2008. During that same week, Chandler became a C-130 aircraft commander and flew missions in Iraq.

It was quite a week.

On his four deployments, Chandler has piloted a C-130 three times and a KC-10 refueler the other time. He also has flown the T-37 “Tweet” and the Jayhawk.

Chandler is a veteran of Operations Enduring Freedom, Iraqi Freedom, Unified Response and Horn of Africa.

Over the years with the Air Force, he has been stationed at several other bases, including stops in Texas, Arizona, Alabama, New Jersey and North Carolina, besides the recent stint in Washington.

“The hard part of the job is how often you have to move,” Chandler says.

Chandler has earned three master’s degrees in the Air Force — one in management from the American Military University, a second in military operations arts and sciences from the Air and Command Staff College at Maxwell Air Force Base in Alabama, and the third in military strategy from the School of Advanced Air and Space Studies, also at Maxwell.

Chandler comes by his military achievements honestly. His maternal grandfather, Monty Coffin, took his early pilot training at West Point and graduated third in his class. He flew bombers in Korea and ended up going to the University of California and the Massachusetts Institute of Technology, earning a Ph.D.

He did important work in aircraft design, Chandler says, and eventually became head of the mathematics department at the Air Force Academy.

“I had that inspiration,” Chandler says of his grandfather, who always was a strong advocate of going to military academies, if the chance presented itself.

In his senior year at West Rowan High , Chandler also received an offer from the University of North Carolina at Chapel Hill.

Among the deciding factors for him to attend the Air Force Academy were going to Boys State and soon after that receiving a letter from the Air Force, explaining the value of the full scholarship in front of him, his chance to fly aircraft and the setting in Colorado.

“There seemed to be a lot of benefits,” Chandler says today from Texas.

Every time Chandler comes back to Salisbury for a visit, he’s “blown away” by the kind reception he receives. Otherwise, he is always surprised how often his parents convey that people here have been asking about him.

Chandler thinks he should be forgotten by now.

Someday, he adds, he would like to return to West Rowan High, address the students, give them an idea of the opportunities in the world and tell them his own story.

It might start with a movie at the White House.