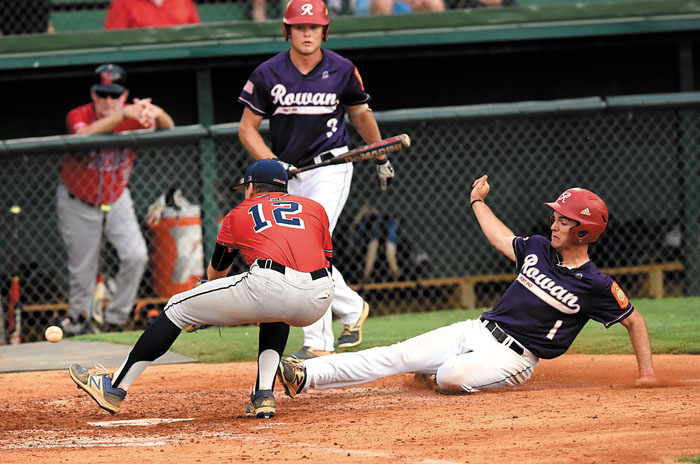 Pitt has been a launching pad to four-year programs for a number of former East Rowan stars, including Trey Holmes (Appalachian State), Micah Jarrett (UNC Wilmington) and Zach Smith (Catawba).

Blackwelder, a 2017 East graduate, will be reunited at Pitt with former East Rowan classmate and current Rowan County Legion pitcher John Owen, who went 6-1 on the mound for the Bulldogs as a freshman.

“John and I will push each other,” Blackwelder said.

The two summers Blackwelder played for the Rowan County American Legion team were nothing short of spectacular. He crammed four years worth of stats into those 92 games, whether he was playing center field, shortstop or second base.

He batted .404 (171-for-424) in Legion ball and did more than hit singles. He smacked 42 doubles, seven triples and 11 home runs, including a three-homer explosion in a single night against Winston-Salem in the 2017 playoffs. He’s also a quick, smart baserunner and pilfered 24 bases in 2016 and 24 more in 2017. Rowan was 74-18 in Blackwelder’s two years, made a trip to the World Series with him leading off in 2016 and made it to the state tourney in 2017. He obviously was an integral element of all that success, offensively, defensively and on the bases.

Blackwelder’s hitting wasn’t limited to Newman Park. As a senior playing for coach Brian Hightower at East, Blackwelder batted .432 in 27 games with 12 doubles, three triples and two homers. His on-base percentage was .491. After not playing at all in high school as a sophomore, he went 33-for-35 stealing bases his last two years at East and 20-for-21 as senior.

“He had an unbelievably great senior year for us,” Hightower said. “He’s just an offensive force because he can put himself in scoring position by himself. He hits a lot of doubles and if he gets a single or walk, he steals second.”

Blackwelder had high school statistics worthy of a Division I scholarship and also performed well for the South Charlotte Panthers in fall showcase ball, but missing his sophomore season hurt him some in recruiting. He’s also not big (5-foot-11, 175 p0unds) and college coaches are generally looking for mashers to man the outfield. His best offer coming out of high school was from UNC Pembroke, a strong Division II program.

He was never healthy at UNC Pembroke.

“I was really struggling with my shoulder around Christmas last year,” Blackwelder said. “I went through some physical therapy, but it didn’t get much better. When it was time for spring ball, the shoulder still wasn’t 100 percent, so we decided it would be best for me to take a redshirt year.”

Blackwelder was an honors student at East and adapted to college classes with no problem.

“I really liked the UNCP baseball coaches and the team,” Blackwelder said. “I liked the school, too, as far as my classes. The only thing I didn’t like was the location. It was kind of isolated, kind of boring. And when I talked to John he’d always tell me how much he was loving Pitt.”

Pitt has advantages over most junior colleges when it comes to social life. It’s next door to East Carolina University, so there are a lot of students in the area. There are also ECU football games. Those are a big deal.

Blackwelder says he’s healthy now after a lot of unplanned rest. He isn’t playing any baseball this summer. He’s working, saving some money for school and he’s also working out, trying to get a little bigger.

“I think my shoulder just needed rest to heal up,” Blackwelder said.  “It feels good now.”

He’ll be looking to making a comeback in the fall at age 19. If he can shake off the rust and dust and be the same player he was in 2017, he can be an impact guy for Pitt, and he should be able to move on from there.

“I’m actually a little nervous right now because I’ve been in some practices, but I haven’t played in an actual game since Legion ball,” Blackwelder said. “I’m hungry to play and I’m thankful that I’ve still got good years ahead of me as a baseball player.”

Pitt  (30-12 in 2018) is a two-year school. Blackwelder still has four years of college eligibility.

Blackwelder and Owen will be joined at Pitt this fall by Carson graduate Clayton Gilmore, who is currently playing shortstop for the Rowan Legion team.

Legion Baseball: Owen, 3-run homers too much for Mocksville